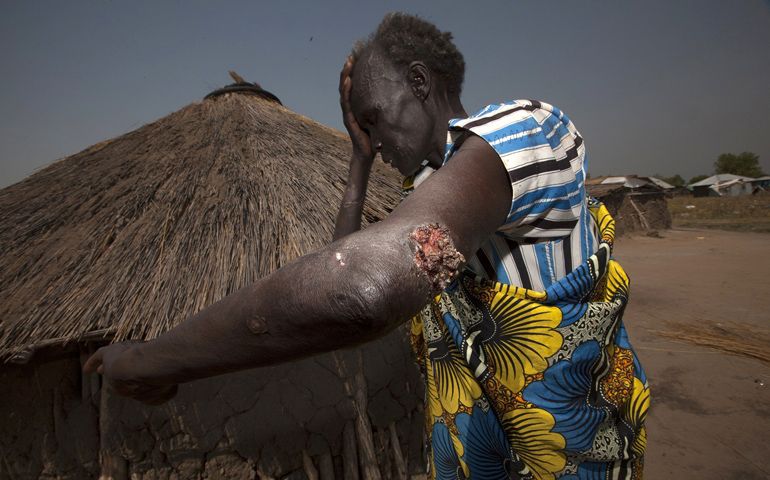 Deborah Awui shows a bullet wound she suffered during crossfire in her homestead in Bor, South Sudan, in this Jan. 27 photo. (CNS/Reuters/George Philipas)

A Catholic priest who fled the recent fighting in South Sudan remains hopeful that a cease-fire will hold but worries that an ethnic militia called the White Army may refuse to stop fighting.

"They aren't an organized force, so they may attack again because they don't understand," Fr. Edward Joseph Deng told Catholic News Service in a telephone interview from Juba, the capital of South Sudan. "The rebel soldiers will stop if they're given that order, but the White Army could do anything."

Named because they cover themselves with white ash derived from burned cow dung, the White Army is allegedly responsible for an attack Monday -- four days after a cease-fire was signed in Ethiopia -- that left at least 15 people dead. Composed mostly of Nuer youth, the militia has focused its violence on the country's largest ethnic group, the Dinka.

"The White Army is made up of simple people who look after cows and goats, and they have no idea about politics. They are misled by the politicians. That's why they came to fight and kill the Dinka. They thought they would get some property in the looting. Some didn't even have guns, they came with just their knives and machetes," Joseph said.

The fighting began Dec. 15 in Juba and quickly spread to other parts of the country. After two days of intense fighting in Bor, Joseph left the town Dec. 20 aboard a U.N. helicopter. He said he was the last one to leave the town except for the police, who remained to fight the rebels.

"The homes and market were looted and the market burned. Our church was looted, and the rebels broke the cross in the chapel. Some women were killed in the chapel of the Episcopal church. There were bodies everywhere, in the homes and beside the roads. Bor has become a ghost town," said the priest, who lost his car and all his belongings to the rebels.

Joseph estimated that 2,500 people had been killed in the town, not counting combatants from the two sides. Control of the town changed hands four times in the course of the fighting. Government soldiers were backed in the fighting by Ugandan troops, according to news reports.

On Tuesday, the government's Relief and Rehabilitation Commission said it had begun collecting cadavers in Bor and that 500 bodies, mostly women, children and the elderly, were initially recovered.

The violence started when a political rift between the country's president and his former vice president quickly degenerated into violence that has pitted government troops, mostly Dinka, against opposition forces, most of whom come from the Nuer, the country's second largest ethnic group.

The White Army debuted in the early 1990s when the liberation movement in the south of Sudan was riddled by internal tensions. A 1991 massacre of some 2,000 Dinka by the White Army took place in Bor and surrounding villages.

An Australian religious worker in South Sudan said the recent renewal of violence underscores the need for the church to be involved in education.

"The youth who made up the White Army in 1991 are now the fathers of today's Nuer youth, and no doubt as they've told the stories they have depicted it as a heroic victory for the Nuer people. If young people today have no education to make them critically question that history, they are more easily recruited into a savage and foolish war in which they have absolutely nothing to gain," said Br. Bill Firman, a La Sallian Christian Brother from Australia.

Firman is executive director of Solidarity with South Sudan, an international network of more than 225 Catholic congregations and donor agencies supporting the church in South Sudan, which in 2011 became independent from the north of the country.

Solidarity with South Sudan carries out training of health workers and teachers at several locations around the country, and he said much of their work remains unaffected by the fighting, though a teacher training course in war-torn Malakal has been suspended until at least June.

"These kids who are fighting can't read or write, and so they depend on what they're told. Education is the only way out of this mess," Firman said.

"When we bring people together in our schools, they learn that they're dealing with other people like themselves. A Nuer learns that a Dinka isn't a monster. And vice versa. It's not surprising that where the Dinka and Nuer live in exile together, they get along well. They don't have to be enemies, and they aren't enemies in places where they can know each other face to face," Firman said.

The Catholic bishops of Sudan and South Sudan, who remain united in one episcopal conference, met in late January and were expected to release a lengthy pastoral letter excoriating South Sudan's feuding politicians, who many say have pushed church leaders aside since gaining independence.

Catholic humanitarian agencies have said that while the cease-fire is a positive step, it has still not guaranteed them access to many affected areas of the country.

"We need urgently to get humanitarian aid to areas that have been inaccessible because of the fierce fighting, particularly to places like Malakal Town where looting has left the townsfolk dangerously short of essential supplies. We cannot afford to allow the hope and promise of this new country to return to the despair and ruin of the past," said Jane Andanje, the country director in South Sudan for CAFOD, the relief and development agency of the Catholic bishops of England and Wales.