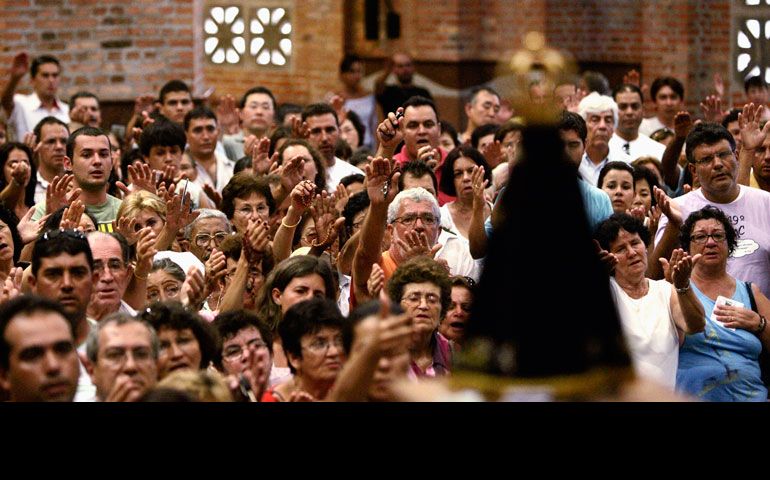 Worshipers pray in the Basilica of the National Shrine of Our Lady Aparecida in 2007 in Brazil. The conference of Latin American bishops, or CELAM, held a major meeting in Aparecida that year. (CNS/Reuters/Paulo Whitaker)

There is a general recognition of the energy generated by the methodology and theology of the Latin American church. Where does this sense of something new come from and what does it mean for our church? What we should not expect is a series of new authoritative pronouncements or dogmas, nor a denial of the existing ones. Rather, what we might expect is a new way of being church, a church very much involved in and related to the ordinary, daily life of our universe.

This involvement in real life issues comes from the methodology of CELAM, the Conference of the Episcopate of Latin America and the Caribbean. It is called “revision of life,” or perhaps better known by its three-step process: see, judge and act. Two more steps are also commonly practiced: evaluate and celebrate. The whole process is reflective and is carried out through group dialogue.

In step one, life is analyzed. If something problematic or a deficiency is found, it is closely scrutinized, and the process moves to the sources of our Catholic faith for a judgment or illumination.

This second step comes from the sacred Scriptures, the fathers of the church, the church’s dogmatic and pastoral encyclicals, the documents of the Second Vatican Council and the Catholic catechism. Judgment is the heart of the process and is the birth of a new theological perspective on the reality of our lives and world.

The judgment arrived at through reflection is the basis for a new pastoral action, the third step of the “Revision of Life.” The third step is taken seriously by being formulated into a commitment to action.

It is this process that gives such dynamism to the Latin American church and that is already influencing the life and energy of the universal church. Some groups used this methodology to reflect on life and the church in the United States in order to make suggestions to the planning committee for Pope Francis’ 2015 visit to the United States.

CELAM evaluates itself and its pastoral action every time it meets to determine whether its commitments are having the desired positive effects or whether they need to be revisited and changed through a new process of reflection.

A large percentage of the analysis and pastoral recommendation of the latest CELAM in Aparecida, Brazil, are clearly reflected in Francis’ apostolic letter, Evangelii Gaudium, a blueprint for a renewed, dynamic universal church. What is being suggested is not a dogmatic application of the latest Latin American “revision of life” to the universal church, but rather a sharing of that dynamic.

The hope is that the rest of the universal church might enter into the dynamic of reflection and action, while researching the church’s wealth of teachings and documentation to come up with new theological and pastoral perspectives that respond better to the reality of modern-day life.

There is a second important aspect of the Latin American process that is implicated for use in the universal church, the process of theology. It is more of a process than a defined or fixed pronouncement or authoritative dogma. It is what Francis and the Argentinian church call the “theology of the people.” It is akin to what Vatican II called the theology of the “people of God.”

This second aspect is closely related to and forms an integral part of the methodology of “revision of life.” The essence of this second aspect refers to who the participants are and how the theological process is carried out. It is characterized by its grassroots or upward thrust, as opposed to a more authoritative or top-down approach. It is the people of God sitting in reflection on their lives and on the Scriptures and church teachings and coming up with new theological perspectives by which to conduct their lives.

There is an effort to be inclusive rather than exclusive, to be more compassionate rather than judgmental. This is accomplished through a fresh study and understanding of sacred Scripture.

Another example is the dialogue process used to prepare for the worldwide synod on the family and, in many dioceses, to follow up that dialogue with families and marriages to understand and apply the final document from that synod, Amoris Laetitia.

How does this fresh methodology and theology play out in local parish and community life?

The church in Chile, through this process, came to the conclusion that it needed a better way of evangelizing and passing on the faith from parents to children. Church leaders realized the urgent need to involve parents and families in faith formation if it is to be effective and lasting.

They decided to use the “revision of life” methodology to help parents be who the church always said they are, the primary educators in the faith formation of their children. They put laypersons, adult parents, in charge of teaching their own children and set about to help them fulfill their mission.

Their efforts worked so well that the process spread rapidly throughout all of Latin America and into 26 countries around the world, including the United States. The process is known internationally as family catechesis.

This process is an application of the “revision of life” methodology and is also a functioning example of the Latin American “theology of the people.” The participants are the people of God, reflecting and acting according to fresh scriptural, pastoral and theological insights. They are energized by the reflection/action methodology and are realizing who they are. They are the people of God, the church, and are acting according to their newly formed consciences, formed through the reflective theological process. They are involved in a process of new evangelization.

This process has been implemented and shown to produce positive results in both English and Spanish languages in some parishes in the U.S. The process is challenging, because it requires time, something that most families are reluctant to relinquish. Families feel stressed. For parents who work outside the home and whose children are involved in sports and school activities, time becomes a precious and scarce commodity.

Francis wisely recognizes this problem and mentions this very situation in Evangelii Gaudium: “The family is experiencing a profound cultural crisis” and “the causes of this breakdown include a lack of opportunities for dialogue in families.”

North American and European countries are being challenged to understand, accept and apply this methodology and theology as a dynamic and effective method of new evangelization. New winds are blowing from the south and from the voice of the church in the Vatican.

Will the seeds of the dynamic process of “revision of life” and the “theology of the people” offered by the Latin American church take root in the soil of the universal church? The answer to that question depends, in great part, on the openness of those who are the pastors, bishops, catechists, ministers and parents in our church.

[Fr. Emmet Farrell is a retired priest from the Sioux City, Iowa, diocese and living in the San Diego diocese. He is a former missionary priest to Peru with the St. James Foreign Missionary Society.]

Perspective | The wider church can learn from Latin America