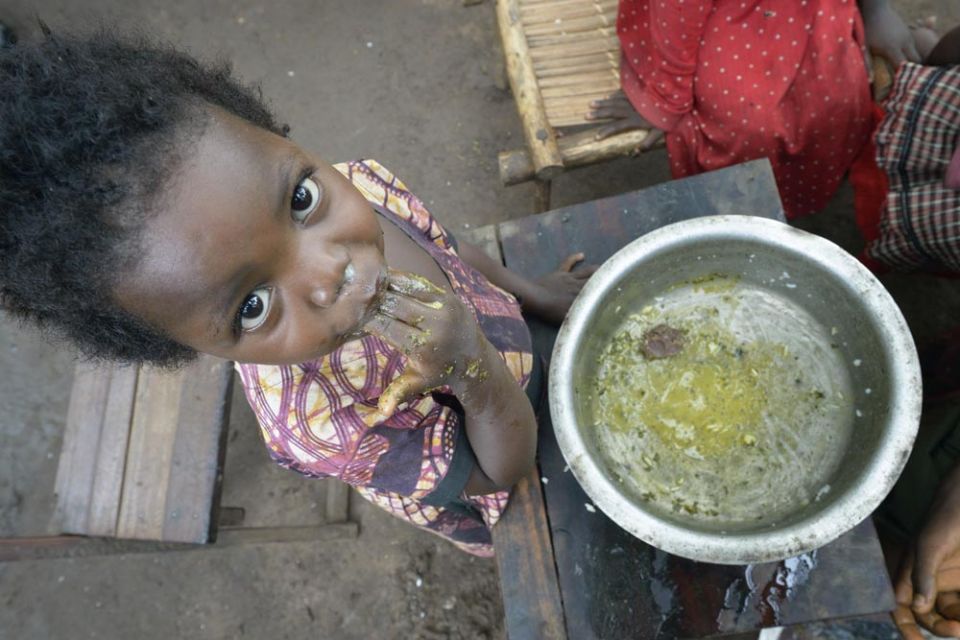 A 2-year-old girl eats a meal in an internally displaced camp in Riimenze, South Sudan, April 29. Up to 20 million people in South Sudan, Yemen, Somalia and northeast Nigeria face the prospect of famine this year. (CNS/Paul Jeffrey)

The numbers of hungry people in the world, which had been steadily declining for more than a decade, took a sudden uptick last year, according to a new report by the Food and Agriculture Organization of the United Nations.

Eleven percent of the world's population — some 815 million people — go hungry every day, a 5 percent increase in just the last two years, according to the report, presenting a serious challenge to the U.N.'s initiative to end world hunger by 2030.

The report points to three main factors: economic downturns in countries heavily dependent on commodity trading, climate change and an increase in violent conflict around the world.

"A number of countries heavily dependent on commodity exports have experienced dramatically reduced export and fiscal revenues in recent years," according to the report. As a result, countries are less able to import needed food and governments lack the fiscal means to protect the poor and rural communities.

"The food security situation visibly worsened in parts of sub-Saharan Africa, South Eastern and Western Asia," the report says. According to the U.N.'s definition, food security exists when all people have access to safe and nutritious food that can support a healthy lifestyle. "This was most notable in situations of conflict, in particular where the food security impacts of conflict were compounded by droughts of floods, linked in part to El Niño phenomenon and climate-related shocks."

As climate change continues to adversely affect agriculture, it also proves to be a trigger for war in areas where natural resources are scarce and disappearing. "The concurrence of conflict and climate-related natural disasters is likely to increase with climate change," the report warns, "as climate change not only threatens food insecurity and malnutrition, but can also contribute to further downward deterioration into conflict, protracted crisis and continued fragility."

Since hitting an all-time low in 2005, the worldwide prevalence of armed conflict in recent years has been rising sharply.

"In countries that are stable, we're making steady progress," says Asma Lateef, director of Bread for the World Institute, a Christian organization that advocates for the hungry of the globe. "We can't take that for granted; we need to continue to invest in agriculture and development."

In an interview with NCR, Lateef stresses that the international community needs "to address the conflict and violence that makes it very difficult to create stable environments in which people can earn a living and lift themselves out of poverty."

While interstate violence has risen by over 60 percent since 2010, non-state violence has more than doubled. These kinds of wars often spill out into the surrounding region, so that "local conflicts evolve into regional or even continental crises," the report says.

The report cites the case of Syria, which has gone from a middle-income economy at the beginning of the country's civil war to one in which 85 percent of the population is now living in poverty. The war has forced almost 5 million Syrians to flee, and nearly a third have settled in Lebanon, where "half of the refugees live in the poorest one-third of districts. Those who were already poor will become poorer and adverse impacts on food security and nutrition are to be expected."

The report says that it is impossible to tell if "this recent uptick in hunger and food-insecurity levels signals the beginning of an upward trend, or whether it reflects an acute transient situation."

Lateef believes the goal of eradicating world hunger by 2030 is still within reach.

"We do have the resources, the know-how, to address hunger, but it was always an ambitious goal because we need the political will to do it," she says. "This comes at a time when [the U.S. is] looking at budget cuts that would affect our ability to engage both diplomatically and as well as in terms of development and humanitarian assistance and we need all those tools to address conflict and the longer term solution to hunger."

The Trump administration's 2018 budget proposal includes massive cuts to foreign aid and diplomacy efforts, including a 50 percent cut in funding for U.N. programs.

Bill O'Keefe, vice president for government relations at Catholic Relief Services, the U.S. bishops' international aid and development agency, echoed Lateef's comments in a press release. "A rise in global hunger is an unacceptable set-back," he said. "We have the means to end hunger, but lack the political will.

"The international community, with U.S. leadership, needs to address the underlying causes of this increase — violence and climate change — now."

"As an international community, we need to be much more alert to those conditions which can trigger conflict, and we need to be much better prepared to prevent conflict in the first place," Lateef said. "It is much easier to do that than to stop a conflict once it's begun."

[James Dearie is an NCR Bertelsen intern. Reach him at jdearie@ncronline.org. ]

A version of this story appeared in the Oct 6-19, 2017 print issue under the headline: World hunger took a sudden uptick in 2016, says UN report .