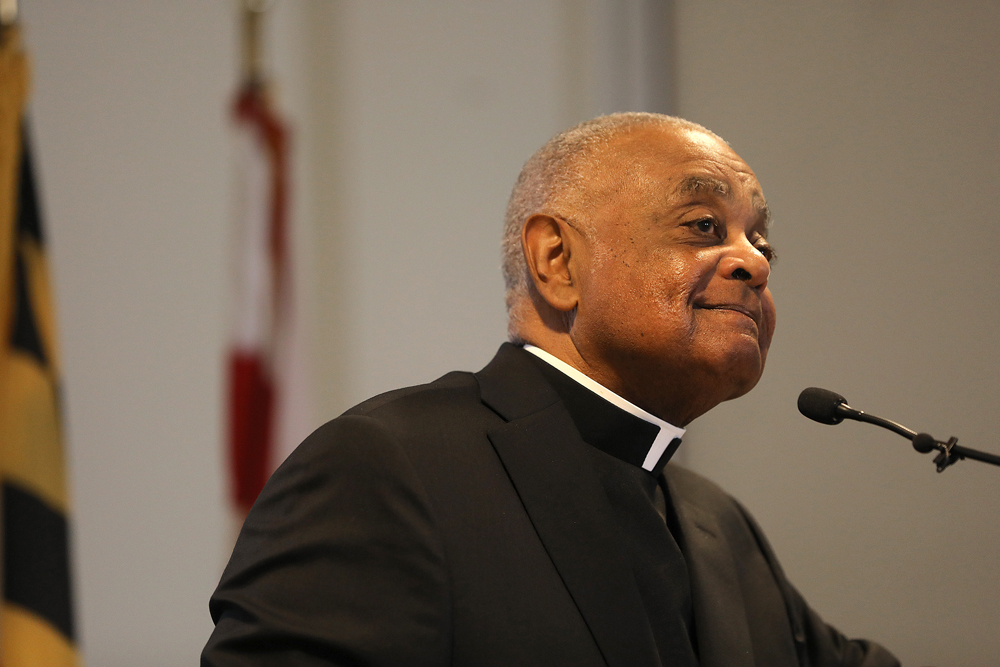 Archbishop Wilton Gregory listens to a question from a reporter during a news conference at the Archdiocese of Washington's pastoral center April 4, after Pope Francis named him to head the archdiocese. (CNS/Bob Roller)

David Spotanski wrote the kind of candid memo to his boss in February 2002 that some underlings compose, think better of, and then delete.

It was no ordinary missive from a chancery bureaucrat. The then-vice chancellor for the Diocese of Belleville, Illinois, felt the memo was so important that he went to then-Bishop Wilton Gregory's house and personally read it aloud. The memo reflected rage, frustration and disgust about sex abuse in the church. In shockingly undiplomatic language, it didn't mince words.

"Too many nights I wake up and wonder if an institution that can be this insensitive to the physical, spiritual and emotional wellbeing of its most precious members — its very future — is even worthy of my three children's innocent faith," wrote Spotanski.

Spotanski continued, stating he wanted "to share clearly with the President of the U.S. Conference of Catholic Bishops a perception to which he cannot relate. I can speak as a parent."

He urged his boss to push for reforms that would require bishops to be fully transparent on sex abusers and to dismiss offenders. In particular, he wanted Gregory to push back hard on foot draggers among his fellow bishops.

At the time, then Boston Cardinal Bernard Law was coming under fire for revelations exposed by the Boston Globe for allowing abusive priests to continue in ministry. In the memo, Spotanski said, "Wilton, it could have been my eleven-year-old Jonathan those bastards sodomized under Law's watchful eye."

Some bishops and church leaders were putting the blame on the media for sensationalizing cases in Boston and other dioceses. Spotanski would have none of it.

"I personally don't want the media to back off until I'm confident there are no more dirty little secrets buried amidst the Mysteries of our Faith," he wrote.

After Spotanski shared the note with friends and coworkers, the memo went viral. Some who read it considered it a miracle that Spotanski wasn't fired on the spot.

But taken in context, Spotanski told NCR more than 17 years later, Gregory wasn't hearing anything new. The bishop was beginning his national ascent, having just been elected as president of the U.S. bishops' conference. Gregory's tenure in that post would result in the enactment of the Charter for the Protection of Children and Young Adults, which, among other things, called for the removal of sex abusers from the Catholic priesthood.

Gregory, recalled Spotanski, knew that his whole presidency and beyond was going to deal with the issue of sex abuse. "There was nothing I said to him that he hadn't heard before," noted Spotanski. Gregory calmly heard his oration and noted, "You are right."

It evidently didn't hurt their relationship. Gregory was named archbishop of Atlanta in 2004, and nine years later Spotanski joined him and now serves as chief operating officer for the archdiocese. As Gregory prepares to move into the pivotal role as archbishop of Washington, D.C., during another time of scandal, Spotanski said the promotion affirms his own faith that the church can emerge from its latest crisis.

He wrote and presented the 2002 memo because Gregory invites candor. That is the vital element to the story, said Spotanski.

The memo has made its way around church administrative circles and into media coverage with Spotanski portrayed as the brave layman taking on the cautious cleric. But for Spotanski, that is an inaccurate picture. The memo had a context.

Gregory, he said, moved from his native Chicago to the Diocese of Belleville in 1994, facing a local sex abuse crisis that, while largely off the national media radar, was as intense in its own way as Boston. As Gregory worked to clean up the diocese, local Catholics were in a questioning mood. Spotanski, a native of the area, was regularly confronted by friends who wondered how he could continue to work for the church.

His softball team, which during the winter was a basketball squad, was largely comprised of Catholics. One member had relatives who had been abused; another questioned his faith as he coped with the news that a popular pastor had been implicated. As they gathered for beers after games, he listened to concerns he wanted his boss to understand.

Spotanski, married and the father of three young children at the time, would go home after a day at the chancery, began writing his memo. His children became an inspiration, as he wrote it from the perspective of a father.

"It took on a life of its own," he said. The story of the memo was reported in the St. Louis Beacon as well as Busted Halo, a Catholic website, and was extensively quoted by journalist Rod Dreher. Spotanski expresses more than a little embarrassment about the attention.

The hero of the story, he said, is Gregory. Throughout the seemingly never-ending crisis, he described Gregory as determined to do the right thing.

As for the memo, "He didn't so much need it. But the church needed a galvanizing document." He described the Dallas Charter, Gregory's historic legacy, as enormously successful. It created an atmosphere of trust within the context of verification.

"It made parents treat the local parish like the mall," said Spotanski.

Now 17 years later, he sees his former boss as entering a role he was made for, as he enters an archdiocese which has undergone its own turmoil via sex abuse charges against former Cardinal Theodore McCarrick and the failure of current Archbishop Donald Wuerl, named in a Pennsylvania grand jury report as not adequately addressing sex abuse concerns when he was bishop of Pittsburgh.

Spotanski's boss is set to enter another whirlwind of crisis. Of all bishops who could have been appointed to that influential post, Gregory is prepared. "The whole arc of his career is set up for this responsibility," said Spotanski.