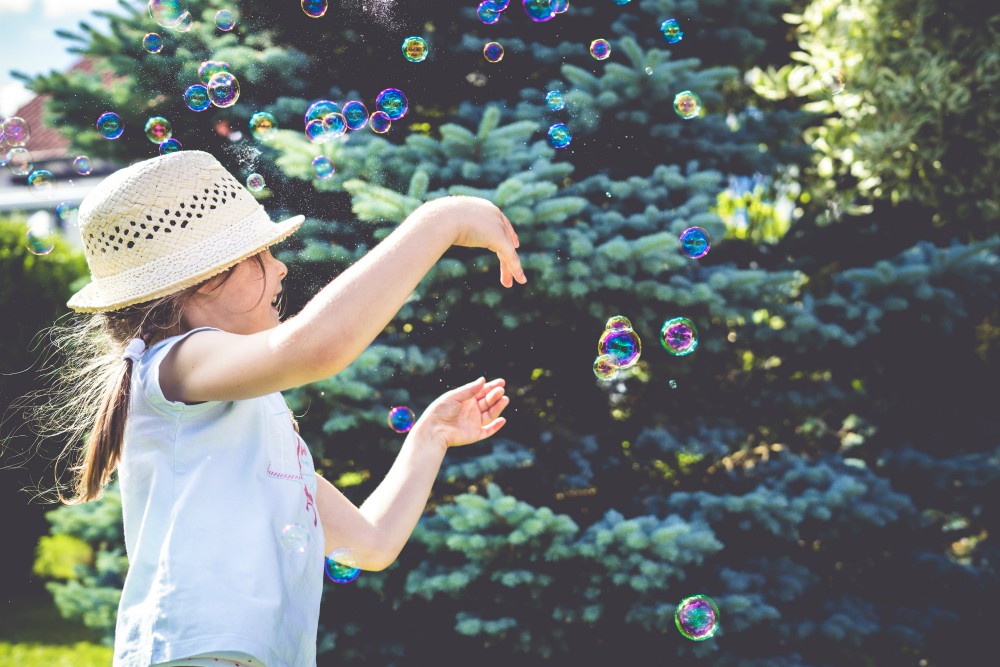 While isolating with three kids aged 4 and under, my wife and I bounce back and forth between hair-pulling stress and deep gratitude like a pingpong ball in the gold medal table tennis match at the Olympics.

For my own reference to come back to on nerve-fraying days, here's an incomplete alphabetical index of things I'm grateful for that are helping me through this time. (Plus three things I miss from "Before This.")

Backyard. One of the privileges of living in the suburbs is a backyard with a swing set and (too many) other toys. The older kids are just old enough when you can push them gently out the door and tell them to play. This usually only works for five minutes before they're asking you to entertain them, but oh, those five minutes!

Beverages. Our quarantine self-care splurging has been focused on four main beverages. First is nice coffee, which we justify buying by the fact that we don't go to Starbucks anymore. The kids get orange juice at grown-up coffee time. Midday calls for one of those premium sparkling waters that actually has a bit of fruit inside to make it seem almost like soda. And in the evenings, the IPAs flow like milk and honey.

Bike pump. The 4-year-old got a bike the last day curbside pickup at Dick's Sporting Goods was allowed. The bike is fine, but what's really exciting is the big orange bike pump, which you can pump up and down and makes a fun hissing sound. Should've just got the pump and skipped the bike and saved some cash.

Birds. Our neighborhood is kind of woodsy and the birds are plentiful and mesmerizing. My burgeoning interest in birding is clearest proof I am nearing middle age, way more damning than the gray hair taking over the chin portion of my beard. But the kids like the birds, too. The oldest one names all the cardinals Tim (or Timberly) for some reason.

Bubbles. Sometimes, the kids don't want to go outside despite gorgeous weather. Sometimes, the 2-year-old even cries about it, if you can believe it. You just need to get them over the hump and then they'll stay outside for an hour. The kick-starter that never fails? A small battery-powered bubble wand. I stand on the deck with my bubble wand-equipped arm outstretched, like the pope bestowing a blessing over St. Peter's Square in the old times before February, and the adoring masses (two children) jump with joy below.

Curb alerts. Another privilege of our pleasant suburban neighborhood is the daily list of "curb alerts" on the neighborhood listserv. A curb alert is when you put something you don't want anymore out on the curb for free pickup, first come, first served. We got a wagon filled with lilies this way because I immediately ran out to the van and floored it three blocks. The new-to-us wagon makes otherwise-boring walks absolutely thrilling to the young passengers. (Have you ever tried pulling a wagon uphill?)

Dance parties. "Alexa, play 'Dancing on My Own' by Robyn." Everybody gets into it.

Daniel Tiger. The older kids are in a weird phase where they're frightened by "Sesame Street" and "Dora the Explorer," two of the gentlest dang television shows ever created. But even gentler and never scary is "Daniel Tiger," which can be summed up by one of its more popular song lines: "There are so many feelings."

Fast casual restaurants. Here's one I'm missing now that we can't have it. Going out to eat with the young ones is almost always a terrible idea. But fast casual places work because they are (1) fast and (2) casual. I swear, the first time we go back to Panera Bread, the oldest kid is going to choke up a little, especially if she watches some "Daniel Tiger" before we leave.

Garden hose. The hose can be attached to one of our two sprinklers, or used to fill up a water table, or just sprayed at each other without any extra accoutrements. It's so versatile.

Jump rope with a handle missing. I don't know why the older two kids love this so much. They just run around with it and swing it back and forth. They sometimes fight over who gets to hold it, and then all of a sudden I'm mediating a conflict about an old piece of string with one cracked plastic handle.

Libraries. Another thing I took for granted before. Libraries are a perfect combination of things for us: an outing, a play space and, of course, a source of fresh books once a week. I even miss wrestling with the 2-year-old to get her away from the kids' computer station.

Mail. This goes in the "daily dose of something new and exciting" category. Even a junk mail envelope of coupons can possess wonders. The mail has brought us seed packets, postcards and newspaper cutouts of kids' activities from two states away.

Mass on Zoom. I'm embarrassed to include this one. We have only attended live Zoom Mass as a family once, for Easter. Otherwise? We've been dropping the ball. I love Mass. But Mass in person with three small kids is exhausting for us. It is not nourishing or looked forward to. My primary feeling around not being able to go to Mass is relief, not sadness. I need to remember that faith practice isn't supposed to be easy or "nourishing" in a superficial way. "If you want a religion to make you feel really comfortable," C.S. Lewis wrote, "I certainly don't recommend Christianity."

Pacifiers. I remember a time when our first kid was an infant when we debated the merits of using a pacifier. Ha. Hahahahaha. Haaaahahahaha.

Playgrounds. Ah, how I would love to apologize to a parent I don't know by telling our kid to apologize to their kid for cutting them in line at the slide and then having that parent say it's OK by them telling their kid to say it's OK even though neither of our kids had any idea what was going on anyway. I miss those awkward social interactions so much.

Sidewalk chalk. Not just for sidewalks! Scribbles are on the fence, the plastic picnic table, the front steps, the deck, the deck railing, the back screen door, the front storm door, the swing set, the neighbor's walk, the cozy coupe. Related fact: Did you know that if you let sidewalk chalk sit on a surface long enough, you need like baking soda and elbow grease to get it off entirely?

Twelve-sided die. A colleague of mine who's a Dungeons and Dragons obsessive gave our kids some oversized foam dice. The 12-sided one is a favorite toy now for its central role in a game I call "whip the die around the room and see if you can get it to land on the target number." We each take turns rolling. Whoever gets the target number first wins that round. The craziest time was when we made 12 the target number. The die must be loaded or something — it took more than 50 rolls to hit it. The kids got bored and tried to quit. "No!" I shouted. "We have to keep going until we get a 12!" The next roll went behind a toy basket. I couldn't see it. The oldest kid said it was a 12. I think it was her first lie.

Weeds growing through the fence. There are weeds and grasses I can't (or don't) buzz down with the string trimmer, but that's actually a good thing because nothing is more fun for the older kids than pulling up clover and daffodils and crabgrass and walking around with it. The toddler gets no less than 25% of her greens this way. The oldest doesn't eat it herself, but she tried to give some clover to a worm she found, as a treat. I think of this as a radical activity, in the sense of getting back to the roots of things. They're doing this with every weed pulled, but they're also happy to spend time in this most elemental way, without screens or toys. This is the radically simple joy of childhood, and I love watching it — even if they accidentally snag a neighbor's flower once in a while.