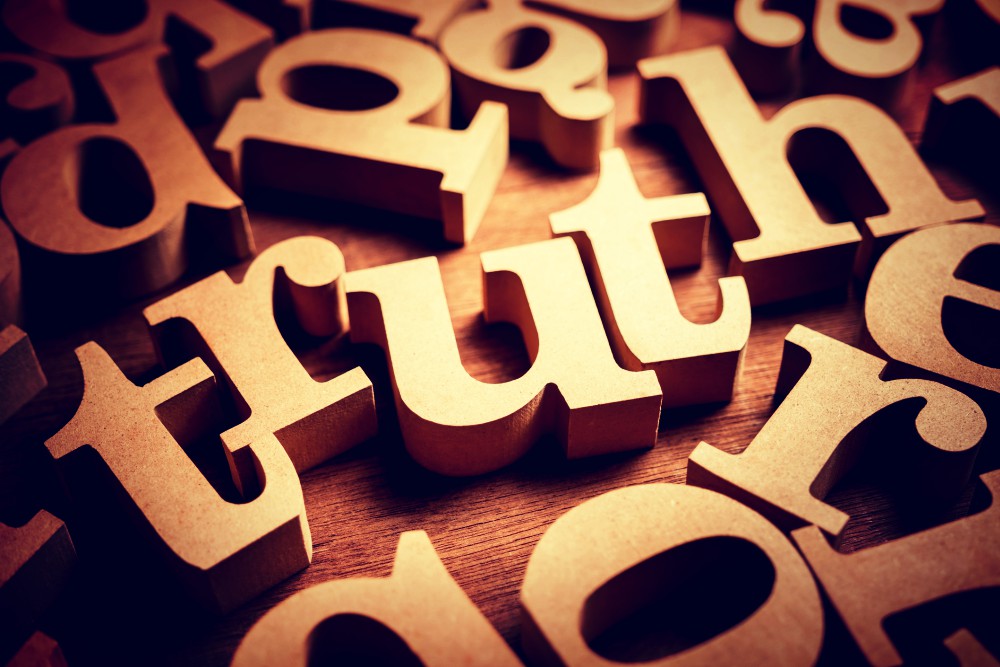 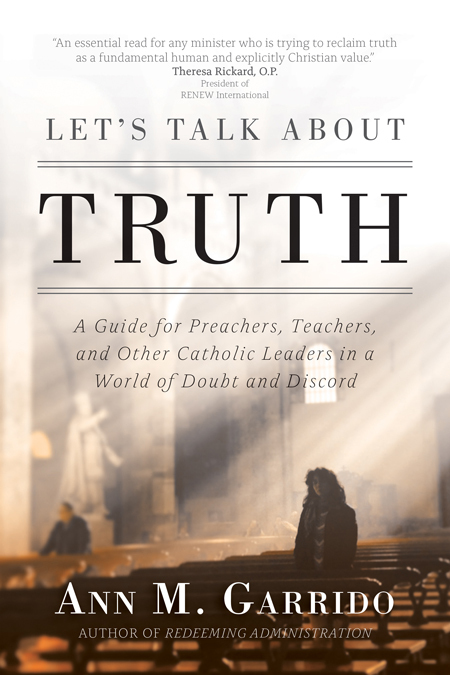 LET'S TALK ABOUT TRUTH: A GUIDE FOR PREACHERS, TEACHERS, AND OTHER CATHOLIC LEADERS IN A WORLD OF DOUBT AND DISCORD
Ann M. Garrido
192 pages; Ave Maria Press
$16.95

As ongoing news stories and commentaries on COVID-19 are filled with conflicting information and excess verbiage that distracts from real human needs, talking about truth seems like an excellent idea.

Ann Garrido's new book Let's Talk About Truth approaches "truth" through the lenses of theology, Scripture, philosophy and anthropology. Garrido has a doctorate in preaching from the Aquinas Institute of Theology in St. Louis. She has authored several books and has traveled the world as an expert in the Catechesis of the Good Shepherd.

Now, after years of writing about topics like redeeming conflict and administration, Garrido has some serious things to say about truth in the post-truth age.

In Garrido's latest book, Thomas Aquinas and Augustine are her trusty references in her exploration of truth and virtue. She enlists the Catechism of the Catholic Church and Pope Francis when their words shed light on her topics. She defines her terms in a conversational tone and divides her analysis of truth in four ways.

Within each section, as well as the introduction, Garrido essentially writes out a homily that can be useful for preaching as well as a resource for further reflection. The practical applications that can be drawn from this book are many, from the parish council meeting room to the classroom, or, in these days, the Zoom room.

All but one of her homilies are based on Scripture. For the feast of St. Catherine of Siena, Garrido uses a long quote from the saint's last letter to her spiritual director, Raymond of Capua, and tells the story of Catherine's vision of a boat coming to rest on her shoulders, the burden of love. Truth and love go together in Garrido's world and in her book.

In Chapter 1, "Truth as a Way of Seeing the World," Garrido defines truth as "always striving to have one's mind be in alignment with reality."

In Chapter 2, she considers "Truth as a Way of Forming Good Judgments," where she makes a distinction between fact and opinion using "the ladder of inference" developed in the 1970s by the late Chris Argyris, an emeritus professor at Harvard Business School. The ladder considers the process by which humans make judgments: available data, data selection, reasoning and interpretation, and conclusions.

"The conflation of fact and judgment is a good part of what makes talking about truth in a post-truth society feel so hopeless and stuck," Garrido writes.

In Chapter 3, she considers "Truth as a Way of Communicating With Others" and delves into the absolute necessity of "truthfulness in speech." Why? Because what we say, what we communicate, must match what we have in our brains. In addition, we should have the courage to speak and preach about truth in homilies and in our ministries.

She then makes a powerful case to return to the Ten Commandments. To extoll truth is not new to us, and neither is the prohibition of lying.

She knows many people think automatically that speaking about truth is "political." But politics, she explains, is actually the "art of working out how to live with one another," rather than, as I interpret her words, maintaining the churn of the dicey polarized partisan situation we have in the United States. Truth, truthfulness and being true to who we are by developing a good conscience and living by it are how we live with one another. 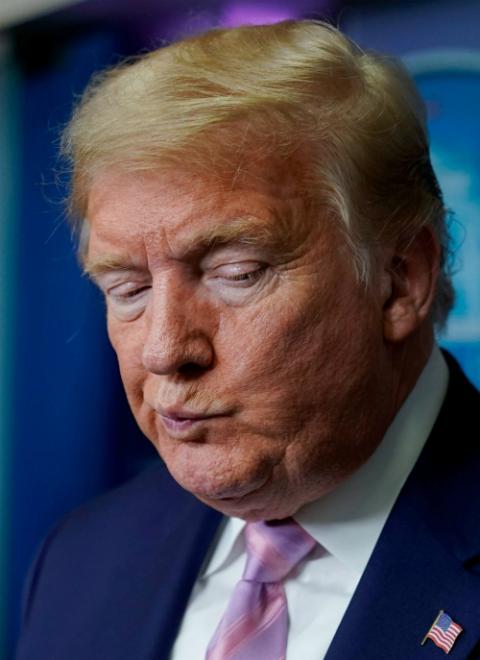 President Donald Trump reacts to a question during the daily coronavirus task force briefing at the White House in Washington April 4. (CNS/Reuters/Joshua Roberts)

Garrido only mentions the current U.S. president once, when noting the 7,645 lies he told during his first 710 days in office, according to fact-checkers at The Washington Post. In doing so, she lays a foundation for preachers, teachers, leaders and parents to renew their commitment to talking about truth and lies by working out all the kinks in our reluctance to ruffle feathers.

One of the most interesting distinctions Garrido treats in Chapter 4, "Truth as a Way of Being in Relationship" is between "truth" and "loyalty" and what it means to "be true."

Loyalty "is an allegiance to a person, group, or a cause" and in everyday use "implies a willingness to take the other's side, to publicly defend the other regardless of the rightness or wrongness of their actions." Aquinas, she says, does not name loyalty as a virtue. Rather than loyalty, the Jewish and Christian traditions tend to "describe being true in terms of devotion, fidelity, faithfulness and steadfastness."

Let's Talk About Truth doesn't get bogged down in terms like syllogism and epistemology, but clearly uses these to lay out her premise that we can know truth with certainty. Garrido draws on Plato and Aristotle in ways that make it easy to translate these ideas into many kinds of communication. I loved the homilies she has prepared, which are conversational in tone.

Anyone who wants clarity in their own minds about the tangled questions involving truth, or some guidance in facilitating truth-tangled conversations with others, will benefit greatly from this book. I highly recommend reading it before your next big family dinner!