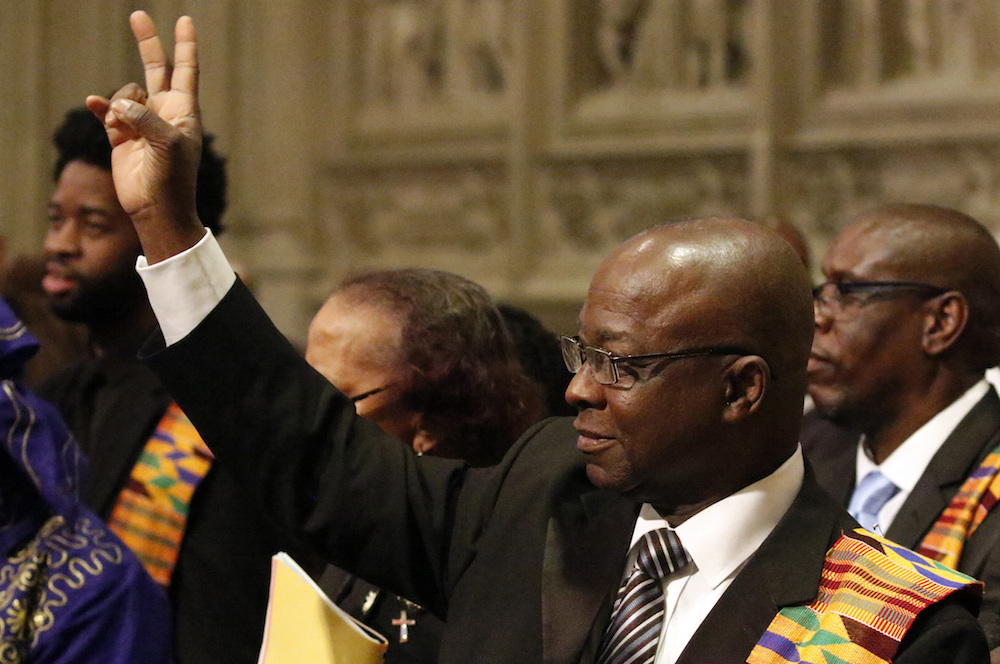 A man shows the peace sign during an annual Mass celebrated for Black History Month Feb. 3, 2019, at St. Patrick's Cathedral in New York City. The liturgy, sponsored by the New York Archdiocese's Office of Black Ministry, was celebrated in observance of the National Day of Prayer for the African American and African Family. (CNS/Gregory A. Shemitz)

Lost in recording the daily onslaught of lies from the president of the United States and of the public discourse over the individual racist culpability of Covington Catholic High School students or the governor of Virginia, is the greater lie upon which our nation and society is built. This Black History Month, we have yet to follow the lead of black leaders past and present and embrace the politically impossible art of the Gospel.

Too easily as a nation we seem to forget the original violence upon which the nation is built. As President Donald Trump maintains power on the foundational lie of white nationalism, political progressives protest that this is not who we are, that the president does not represent American values.

Yet just 100 years ago, upon their return from service to the nation in the Great War, African-Americans faced another upsurge in anti-black lynchings. At the National Lynching Memorial, also known as the National Memorial for Peace and Justice, the Equal Justice remembers the military service of African-Americans throughout our nation's history, including the Red Summer of 1919.

In Dusk of Dawn: An Essay Toward An Autobiography of a Race Concept (1940), W.E.B. Du Bois wrote, "The facts concerning the year 1919 are almost unbelievable as one looks back upon them today." Du Bois described a "reign of terror" in Georgia and 26 cities. He remembered that "seventy-seven Negroes were lynched, one of whom was a woman and eleven were soldiers; of these, fourteen were publicly burned, eleven of them being burned alive."

Reflecting on the lie of anti-black white supremacy in Chapter Two of Darkwater, entitled "The Souls of White Folk," Du Bois was "curious" how America saw itself after World War I as "a natural peacemaker, then as a moral protagonist in this terrible time."

He continued: "No nation is less fitted for this role. For two or more centuries America has marched proudly in the van of human hatred, making bonfires of human flesh and laughing at them hideously, and making the insulting of millions more than a matter of dislike, rather a great religion, a world war-cry: Up white, down black; to your tents, O white folk, and world war with black and parti-colored mongrel beasts!"

Col. William Hayward, the commanding officer of the 369th Infantry Regiment, 93rd Division, aka the Harlem Hellfighters, framed the cruel irony of the upsurge in anti-black violence in terms of democracy: "In view of the sacrifices the negro soldiers made to this war to make the world safe for democracy, it might not be a bad idea to make the United States safe for democracy."

Yet, 100 years later, in 2019, have people of faith and the nation as a whole made the United States safe for democracy?

Whether in the separation of families and caging of children at the southern border, in voting restrictions in 26 states, or in the near-lynching of Jessie Smollett, or in the upsurge in anti-black, anti-brown, and anti-Semitic and anti-Islamic violence, it strains credulity to claim that our nation has transcended the violence and lie of white settler colonialism and superiority.

White leaders calling for civility rings hollow as it echoes the hypocrisy of white clergy who demanded that the Rev. Martin Luther King Jr. give up his protest for racial equity and justice. As Boston Globe columnist Renee Graham rightly insists, "Civility can wait, democracy can't."

A more truthful "State of the Union" would acknowledge how the racial wealth gap is grounded in a capitalist society built on the labor of slaves. As the Duke University economist William Darity and his colleagues explain, the racial wealth gap shows no record of abating. Their study shows that "black households hold seven cents on the dollar compared to white households."

The racial economics of so-called inclusive capitalism, argues sociologist John N. Robinson III, "obscures the myth of a self-regulating market" and the "political underpinnings of economic inclusion, which has consistently favored the 'self-reliance' of white workers while excluding blacks."

Robinson cites Sen. Bernie Sanders (D-Vermont) embracing the "99 percent" narrative as the centerpiece of his 2015 presidential campaign. The 99 percent narrative subsumed a subtle racial sleight of hand that called for restoring the American Dream and middle class. A cultural vision of the American Dream and a middle class composed of nonelites, however under threat it may be, explains Robinson, has always been "historically a racially exclusive one."

In other words, Robinson demonstrates how American capitalism has always been anchored in racism and "fuels capitalism's selective democratization."

Capitalism's selective democratization criminalized blackness through slavery and Jim Crow and now through the school-to-prison pipeline. The 2013-14 National Civil Rights Data Collection study of all public schools "found that black students were nearly four times as likely to face out-of-school suspensions as their white peers, and students with disabilities were twice as likely to be suspended as students without special needs."

While neoliberals across the political spectrum uphold freedom as the ultimate value of American politics, political scientist Ashley M. Campi unpacks neoliberal assumptions of human hierarchy and anti-blackness that undergird the criminalization of black and brown elementary school children. As police interrogate, threaten, and kill people of color in "the streets, in stores, and in schools," they "instill a relation of command and submission that is a feature of authoritarian, rather than liberal-democratic, forms of rule."

Anti-black racism is a reality in so-called "blue" states like Massachusetts as it is in "red" states like Louisiana. I was painfully reminded of this when I attended the NAACP meeting in Pittsfield, Massachusetts, on Feb. 6 and heard parents of color decry the recent uptick in racial violence. They pressed the recently elected district attorney how she would shift from a punitive system to one rooted in fairness and justice.

Living the Gospel is not about the art of the politically possible within American white nationalism. All white Americans, including white people of faith, need to work through our shared participation in the violent lie of white supremacy. Becoming disciples of Jesus Christ in God's inclusive community of love entails work far more imaginative and humanly creative.

Rather than insisting on our innocence, living the Gospel is the art of creating the politically impossible following the lead of black and brown peoples past and present.

This Black History Month, may we face the reality of the originating violence in which we all participate, work to end that violence and truly celebrate the humanity, genius, beauty and soul of black and brown peoples all over the world.