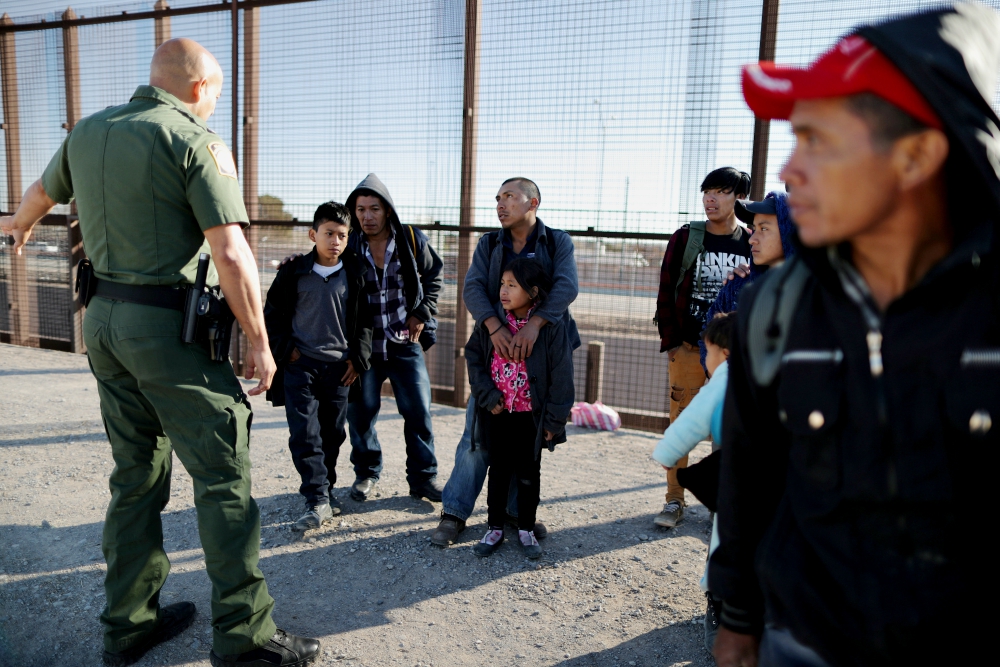 A group of Central American migrants is questioned about their children's health after surrendering to U.S. Border Patrol agents south of the U.S.-Mexico border fence in El Paso, Texas, March 6. (CNS/Reuters/Lucy Nicholson)

The president's threat was unmistakably clear: "Next week ICE will begin the process of removing the millions of illegal aliens who have illicitly found their way into the United States. They will be removed as fast as they come in," he tweeted Monday night. The tweet served to rev up his base ahead of his official campaign announcement on Tuesday night, at which his anti-immigrant comments received the longest and loudest applause.

The response by the Catholic Church in this country must also be unmistakably clear: It is time for civil disobedience. The words "mass deportation" should send shockwaves through the conscience of anyone who knows anything about the brutalities of the 20th century. The fact that this planned mass deportation is targeting people who did no more than enter the country without proper documentation, a misdemeanor akin to jaywalking, at a time the president's lackeys and former counselors are convicted of felonies and still receive favors from the Justice Department, only aggravates the injustice.

The new threat comes on top of his administration's inhumane policies at the border, where the administration is detaining asylum seekers, that is, people who have committed no crime at all. According to a report from the inspector general of the Department of Homeland Security, the overcrowding in these camps is obscene, with 76 people in a cell designed to hold 12 people and 900 people in an El Paso processing center designed to hold 125 people. As NCR editorialized earlier this week, "It's time to stop looking away and to start calling these 'centers' or 'facilities' what they really are: concentration camps."

And the overcrowding on this side of the border is permitted at the same time the administration is implementing a "Remain in Mexico" policy that seeks to keep refugees from entering the U.S. in the first place. Again, these refugees have committed no crime whatsoever. Our friends at the Hope Border Institute have compiled some more horrifying data about the cruel effects of this policy: Only one judge has been assigned to hear these cases, which stood at 3,000 in May; 80% of the families have expressed fear about returning to Mexico; and advocates are given insufficient time to meet with the detainees before they are sent back.

Cling to the oppressed as we cling to the cross: The embrace is one and the same.

Last week in Baltimore at the U.S. bishops' conference meeting, there was much discussion about what the bishops must do to reclaim the moral authority without which their claim to leadership of the Christian community is fatally flawed. The first, and necessary, part of that effort must entail a full-throttled implementation of Pope Francis' new laws against sexual abuse of minors and the covering up of such abuse. That cover-up was, as we know, the result of a hierarchic and clerical culture that prevented many bishops from confronting the evil in their midst.

In the 1990s, those bishops who did try to confront the evil often faced obstacles from the authorities in Rome who were not keen on laicizing anyone, and few bishops had the courage to stand up to Rome. N.B., one of the more notable exceptions was Cardinal Donald Wuerl, who refused Rome's order to reinstate a known pedophile and appealed the decision to do so until his removal of the priest was confirmed.

Now, the bishops have an opportunity to reclaim some of their moral authority in another way. In normal times, bishops should not break the law. I understand, also, that some bishops along the border have to maintain very delicate relations with Border Patrol and Immigrations and Customs Enforcement agents. Their ability to protect migrants might be jeopardized if they were to take such a bold step as committing an act of civil disobedience.

But most bishops can and should, at first notice of an ICE raid, go to the site with a team of lawyers, surrender their passport and ask ICE to apprehend them too. Or if they have a detention center in their diocese, they could lead a group of Catholics in blocking the entrance. Of course, the police will remove the protesters and return a bishop to his office, but the point will have been made: These are not normal times, what is being done to these desperate people is the real crime, and the Catholic Church stands with them in their hour of need.

The bishops should also consider identifying certain parishes as sanctuaries, parishes with the capacity to keep people housed and fed for a considerable period of time. The bishop could place himself in front of the entrance. If there is an ICE raid, demand a warrant. If there is a warrant, block the entrance and make them arrest the clergy before they get to the migrants. Retreat houses and seminaries would make excellent sanctuaries, already possessing the capacity to provide shelter and food. Take a special collection at all parishes to provide for these basic necessities. Cling to the oppressed as we cling to the cross: The embrace is one and the same.

In California, the prospect of the state passing a law requiring priests to violate the secret of the confessional when a fellow cleric confesses sexual abuse of a minor will also demand disobedience of the law. That, too, is an abnormal situation that demands the bishops do things they would not normally do. We are right to defend our faith and we are right to defend the faithful. Confession is a central part of our faith, and our Latino brothers and sisters are a central part of our faithful. To the barricades.

The future of the Catholic Church in this country rests with our Latino brothers and sisters. If the bishops are not going to bestir themselves to defend these refugees and migrants, just pull the plug on the whole thing and go home. We worship a God who sacrificed himself on the cross for our redemption. The apostles followed him to similar, gruesome deaths.

Will their successors not risk an arrest to defend these poor people, our people? Will they not get creative in stating, unequivocally, that the Catholic Church will not be a bystander to this moral stain on our country? Will they exercise moral leadership?