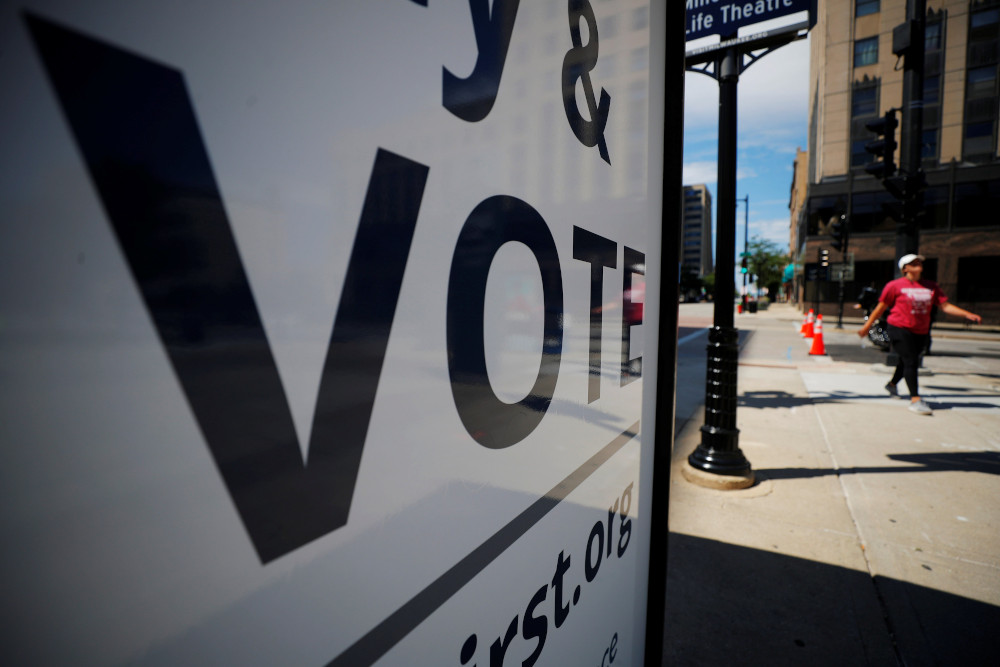 A sign reads "VOTE" Aug. 16 outside the site of where the Democratic National Convention was going to be held in Milwaukee until COVID-19 forced the convention sessions to be held virtually. (CNS/Reuters/Brian Snyder)

In my links page last week, I called attention to an article in The New York Times in which seven security analysts sketched election scenarios that threaten the stability of our democracy and "keep them up at night." One of the experts, Chris Painter, who served as the top cybersecurity diplomat for the State Department for several years not only sketched his frightening scenario — the Russians plant false evidence of Chinese interference — but offered thoughts about how to counteract the threat. He wrote:

Faced with this reality, federal and state officials, as well as social media companies must publicly expose, as quickly as possible, any attempt at interference, regardless of candidate. Social media companies must not only swiftly flag and delete false content, but their platforms must minimize its spread and promote the truth. Additional funding should go to state and local election authorities to bolster the security of voting systems and to enhance communication to voters. Finally, while the government must try to deter any actual foreign interference, it should not undermine confidence in our voting systems. If voters lose trust in the legitimacy of our elections, the Russians and other malicious actors will have won.

It is regrettable that we cannot count on the Trump administration to undertake the tasks Painter thinks the government should do, but our nation's moral leaders, including the Catholic bishops, can join in his final item: not undermining confidence in our voting systems.

Talk about U.S. influence at the Second Vatican Council tends to focus on Dignitatis Humanae, the declaration on religious freedom, which repudiated the pre-conciliar church teaching that had condemned our liberal constitutional church-state arrangements, and instead crafted a theological basis for the American constitutional practice. That theological basis was different from the Lockean ideas that shaped the founders, to be sure. Nonetheless, the old doctrine that "error has no rights" was cast aside forever.

There was another, indirect influence on the Second Vatican Council that we can attribute to our national experience: the embrace of democracy in Gaudium et Spes, the Pastoral Constitution on the Church in the Modern World. For the Roman authorities of the long 19th century, democracy conjured memories of the horrors of the French Revolution. The correspondence of American prelates with Roman authorities throughout the 19th and first half of the 20th centuries on the subject of church-state relations could be summarized in the words: We are not the French! Our democracy does not imperil the faith but affords it the freedom it needs to flourish.

Throughout Europe in those same years, there were Catholics who aspired to a reconciliation with modernity, including with democracy, but the forces of reaction within the church proved too strong. Even as forceful a personality as Pope Leo XIII failed in his effort to get the French church to rally to the Republic. His pontificate was bookended by the reactionary papacies of Pius IX and Pius X and the subsequent two Piuses proved themselves too tolerant of fascism.

Still, there were Catholics of a more enlightened outlook, from Charles de Montalembert and Jean-Baptiste Lacordaire in the 1820s to the great Jacques Maritain and Giovanni Battista Montini in the interwar years, Catholics who understood the need for an opening to democratic norms, and saw in the experience of the United States confirmation that such norms could be reconciled with the faith. This tradition, kept in the shadows for so long, won the day at Vatican II.

And so, in Gaudium et Spes we read:

It is in full conformity with human nature that there should be juridico-political structures providing all citizens in an ever better fashion and without any discrimination the practical possibility of freely and actively taking part in the establishment of the juridical foundations of the political community and in the direction of public affairs, in fixing the terms of reference of the various public bodies and in the election of political leaders.(5) All citizens, therefore, should be mindful of the right and also the duty to use their free vote to further the common good. The Church praises and esteems the work of those who for the good of men devote themselves to the service of the state and take on the burdens of this office.

The stilted language of a conciliar text can easily be translated by prelates today: The right to vote for one's political leaders is a precious right and grave moral responsibility that should be protected by those in a position to do so.

The U.S. bishops, in their quadrennial document "Forming Consciences for Faithful Citizenship," are clear that the obligation to become politically involved is a Gospel mandate. The bishops state:

In the Catholic Tradition, responsible citizenship is a virtue, and participation in political life is a moral obligation. "People in every nation enhance the social dimension of their lives by acting as committed and responsible citizens" (Evangelii Gaudium, no. 220). The obligation to participate in political life is rooted in our baptismal commitment to follow Jesus Christ and to bear Christian witness in all we do. As the Catechism of the Catholic Church reminds us, "It is necessary that all participate, each according to his position and role, in promoting the common good. This obligation is inherent in the dignity of the human person. … As far as possible citizens should take an active part in public life" (nos. 1913-1915).

Consequently, efforts to frustrate that participation in political life by casting doubt on the validity of an election must be deemed contrary to the teaching of the church.

The right to vote for one's political leaders is a precious right and grave moral responsibility that should be protected by those in a position to do so.

Bishops are not expected to be experts in every nook and cranny of civic life, but you have only to read a newspaper to recognize we are witnessing an unprecedented challenge to participation in political life by President Donald Trump. He repeatedly suggests, without foundation, that voter fraud is widespread, when it is not, and that mail-in voting is especially susceptible to voter fraud. Instead of helping the states and the U.S. Postal Service prepare for an increase in mail-in voting due to the virus, the administration is undermining confidence in the process itself.

The bishops should speak out. It took the U.S. episcopate decades to convince the Vatican to recognize the value of democracy. They should be not be shy about defending it to their fellow citizens. There is no need to display even a whiff of partisanship in addressing this issue. Still, the bishops — and all Americans — should reflect on these twin facts. If you vote for Joe Biden, given his age, you will be voting for him for the last time. And if you, and a majority of the American people, vote for Trump, it might be your last vote period.

A version of this story appeared in the Oct 2-15, 2020 print issue under the headline: Don't let this be your last vote.