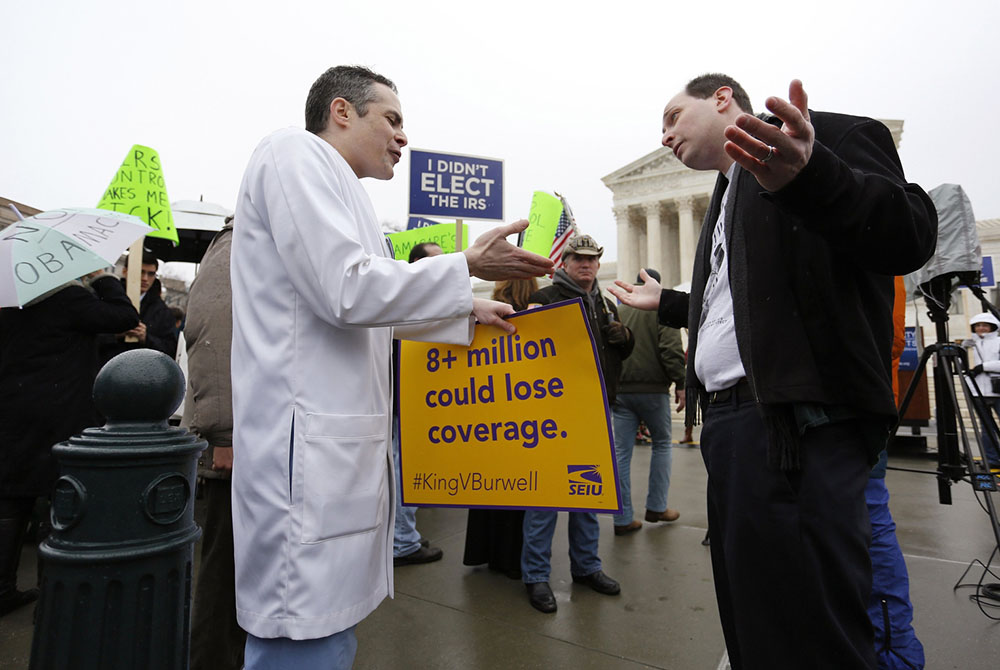 Dr. Devon Fagel, a physician and cancer survivor, argues in favor of the Affordable Care Act with Phil Kerpen, who was part of a Tea Party Patriots demonstration against the health care law March 4, 2015, outside the U.S. Supreme Court building in Washington. (CNS/Jonathan Ernst, Reuters) 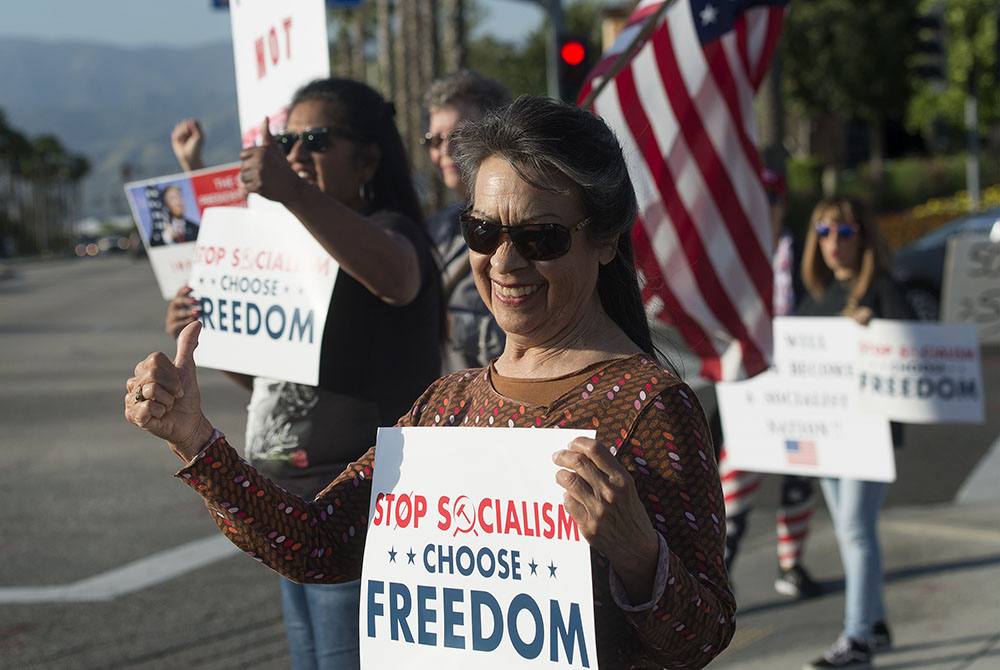 The only thing standing between the people of this planet and an even worse catastrophe than the one we are enduring are institutions and bureaucracies, neither of which were enjoying much good press before the virus hit. Bad press was the least of it. As Dana Milbank demonstrated in The Washington Post, the virus hit at the end of four decades that were largely defined politically by a desire to shrink the government and cuts its budget, hoping that markets would pick up the slack.

The apotheosis of the anti-government, libertarian ideology in Milbank's telling was the Tea Party movement, its ethos summed up by anti-tax activist, and Republican Party king maker, Grover Norquist saying, "I don't want to abolish government. I simply want to reduce it to the size where I can drag it into the bathroom and drown it in the bathtub." That was a more aggressive stating of Ronald Reagan's quip that "The nine most terrifying words in the English language are: I'm from the Government, and I'm here to help." The viewpoint had acquired a great deal of social Darwinism along the way and was strengthened in numbers, but not in moral vigor, when it became aligned with racism in the Obama years.

It is said that vices, like virtues, tend to run together, so it should not surprise that this anti-government ideology found a way to align itself with President Donald Trump, a man of no known ideology. Under the tutelage of Steve Bannon, Trump gave voice to the "blow it all up" populism that was building up across the land. To the racism of the Tea Party he added the xenophobia, and the mantra, of the "America First" movement. And Trump added his own narcissism to the mix, lessening the ideology but strengthening the political movement with a fascistic devotion to the caudillo. Who else would discuss the TV ratings for his press conferences while people are dying?

Hence the demeaning of reporters who ask important questions, the concern with appearances over substance that resulted in a delayed national response to the threat, the effort to blame China, the continued questioning of "the deep state," the suggestion that the federal government not help states whose governors are insufficiently servile to him.

The value of institutions and bureaucracies is not limited to the governmental sector. Unemployment insurance was first enacted in Wisconsin in 1932 and the Social Security Act of 1935 encouraged other states to follow suit, but it was proposed in 1919 by the nascent U.S. bishops' conference. For all of my disagreements with the bishops' conference, none of which I retract, the staff at the conference has played a critical role in preventing cuts in food stamps, in preserving the Affordable Care Act and supporting a vast array of anti-poverty efforts during these 40 years of anti-government fervor.

Our Catholic hospitals and nursing homes are on the frontlines of the coronavirus fight. Our parish food pantries are helping those who have lost their jobs. Catholic Charities, at the national and local level, is deeply engaged in almost every aspect of this national crisis and Catholic Relief Services is at work helping those around the world for whom the virus is only the latest of many plagues. Jubilee USA is pushing for debt relief for developing countries and anyone familiar with attempts to help the suffering people of Puerto Rico knows that Jubilee USA has been at the forefront of that fight.

So, with that in mind, I was horrified by an essay published here at NCR last week written by Mary Hunt. She, too, has brought her ideological blinders to the discussion: Not once did she express any empathy for those who are suffering but, instead, could scarcely contain her excitement that this pandemic might further her ideological agenda, arrived at long before. She welcomes homegrown liturgies at which "no male priest is in sight," writing, "This is change, progress." If only the virus had come sooner!

Bringing all the care of an arsonist to our most venerable Catholic traditions and beliefs, she opines that a "wholesale rethinking of Eucharist is all that prevents these groups, and many other local faith communities, from engaging in the customary celebration of Communion." Except, that is not customary, is it? And, how can the Eucharist, which is God's gift to the whole church, be subjected to any "wholesale rethinking" and by whom?

Will the "women-church groups and other intentional eucharistic communities" Hunt celebrates be able to pick up the slack if the much-maligned "institutional church" is crippled? I am sure they are as capable of generosity as any other people, but if you are serious about loving others in a complex society, you need to think about building institutions to do so. "Those who love peace must learn to organize as effectively as those who love war," said the Rev. Dr. Martin Luther King, Jr.

I note, as well, that two of the most important institutions of our institutional church at this moment, the Catholic Health Association and Catholic Charities USA, are both led by highly competent religious women. Thank God for Mercy Sr. Mary Haddad and Dominican Sr. Donna Markham and the institutions they lead. Yes, I would like to see women in more leadership roles in the church but it is these highly competent women who will make that hope more likely, not any theological rants that are so far outside of our Catholic theological tradition, they are self-marginalizing.

Hunt provides no survey data to support her sweeping conclusion that change is in the offing and will resemble the kind she wants. There are no historical analogies, no sociological modeling. The greatest difficulty, however, is moral: What is the moral difference between Trump ignoring the suffering of millions of people to tout his ratings and Hunt's view of the epidemic as a mere pretext for the enactment of her ecclesial vision?

Am I being too harsh? True, the consequence of Trump's failures will be measured in the thousands of additional lives lost. But, the cost of Hunt's failures is the self-marginalization of progressive Catholics at a time when both the country and the church need the insights and the vision of progressive Catholics. If demanding intellectual and moral rigor from prominent spokespeople is too much to ask, then we deserve to be marginalized. The distinction between seeing the pandemic as an occasion to advance a prior ideological agenda and recognizing that our moral and intellectual commitments can help alleviate the suffering and rebuild a society that is more just and more safe from pandemics because it is more just, that is no small distinction. No one would suggest that institutions are above reproach. Yet, throughout the world in these dark days, people in need are turning to the institutions of government and of the church to help them through this crisis. It is morally irresponsible to denigrate institutions or turn this tragedy into a vehicle for an ideological agenda, no matter who does it.