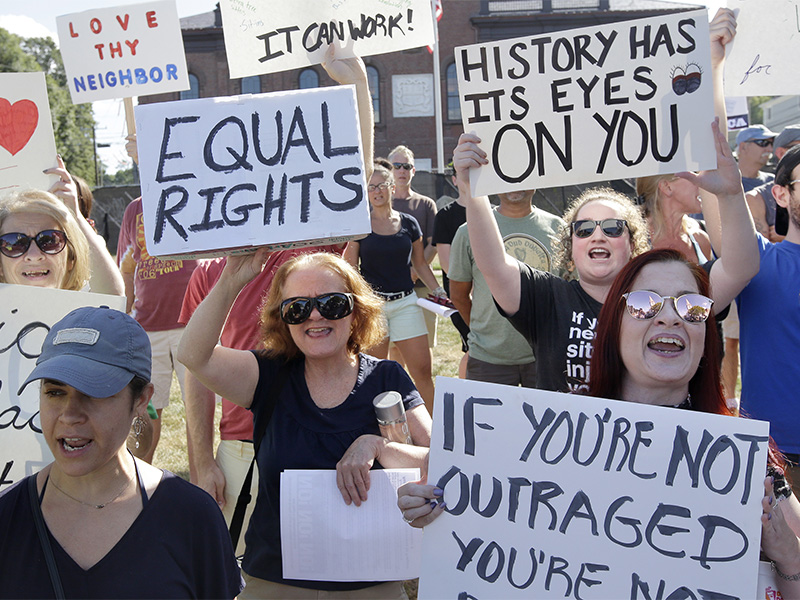 Demonstrators display placards and chant slogans during a protest on Aug. 13 in Plymouth, Mass. The protest was held to denounce hatred and racism in response to a nationalist rally that spiraled into deadly violence in Charlottesville, Virginia, on Aug. 12. (RNS/AP/Steven Senne)

"Is the president a racist?" This question was asked in several different ways by many different media outlets after President Donald Trump's public meltdown at a press event on Tuesday, Aug. 15.

There is no evidence that the president harbors racist views. Of course, as a public figure, his private thoughts are of less concern than his public statements. He may not have a racist bone in his body, yet his effort to equate white supremacists with those who oppose racism certainly brought a smile to the faces of those who do harbor racist sentiments. If he did so out of some political calculation, that may even be a greater moral failing than simply expressing his genuine views.

I fear the reason for the outburst is actually worse, and certainly more dangerous. Watching that press conference, I did not see a man who was acting out of racist instincts. I saw a man acting out of reptilian instincts: The world is divided into threats and non-threats. The neo-Nazis and white supremacists who caused the riot in Charlottesville were not the ones giving Trump a hard time. They were not the ones who made him go out on Monday and read a condemnation of racism off the teleprompter. It was all those other people giving him a hard time. Ergo, the people who are with him were, to the president, the good guys even if they were neo-Nazis. His Manichaean worldview conflated with his acute and evident narcissism and — voilà — the world witnesses a president making excuses for neo-Nazis.

We must rely on psychologists to explain the finer points of the president's psychology. We know that deeply troubled personalities have worked in the Oval Office before. But, this is the first president in my lifetime whose basic ignorance of history eases his descent into moral obscenities.

President Trump is quick to praise the military, but he doesn't connect the soldiers he sees standing in front of him with their forbears who stormed the beaches at Anzio and Normandy to defeat the Nazis.

I am sure he loves and trusts his son-in-law, Jared Kushner, and he certainly loves his daughter Ivanka, both of whom are Jews. But, he doesn't know that there is a history to angry white men carrying torches through the streets, chanting "Blood and Soil," and it didn't turn out well for the Jews. He apparently did not hear the Charlottesville racists chanting, "Jew will not replace us."

Trump once said that "with the exception of the late, great Abraham Lincoln, I can be more presidential than any president that's ever held this office." He seems not to be aware that the Confederates committed treason against the United States and fought a war against Lincoln and the Union he defended. One wonders if he remembers that he is also the leader of a party Lincoln helped found.

Our friends at Media Matters think they have found what the president did remember. They have spliced together some of the president's more outrageous comments with previous and eerily similar claims made by the blowhards on Fox News. It is stunning.

None of us is free from the sins of the spirit. Find me a man who claims he has no malice in his heart and I will show you a man from Hadleyburg, just waiting to be corrupted. And like the pretendedly upright people of Twain's famous town, Trump makes great efforts to conceal his deficiencies and only ends up sounding all the more ludicrous and fraudulent when exposed. Watching the press conference the other day, I kept expecting someone to open an envelope and read, "You are far from being a bad man."

Assessing the events in Charlottesville from a moral perspective was not a difficult task. We can analyze and debate the manner in which statues to Gen. Robert E. Lee were erected in the first half of the twentieth century in an effort to whitewash the ugly history of racism, and how those same statues are now being removed in a different attempt to whitewash history. Adam Goodheart at Politico has a good synopsis of this important history of symbolism.

We can debate, another time, the political tactics of the Black Lives Matter movement.

We can debate, and must debate, how best to eradicate the evil of racism from our culture.

What we can't do is make apologies for neo-Nazis as Trump did. Here, there is not room for moral fudging.

Catholic and Christian voices have become louder this week, and more intellectually focused, in denouncing the president.

A group of Christian ethicists published a fine statement that explains how racism offends our most foundational Christian beliefs. "As followers of Jesus Christ and as Christian ethicists representing a range of denominations and schools of thought, we stand in resolute agreement in firmly condemning racist, anti-Semitic, anti-Muslim, and neo-Nazi ideology as a sin against God that divides the human family created in God's image," the statement begins. The "imago Dei." It doesn't get much more foundational than that! Kudos to Professors Tobias Winright, MT Davila, Anna Floerke Scheid,* and Matthew Tapie who drafted the statement and circulated it. At last count it has some 350 signatures. If President Trump is right and there are "two sides" to this, I'll stand with the ethicists.

Cardinal Sean O'Malley of Boston also issued a powerful statement indicting the "pagan ideas of Nazism" and their vile expression in hatred against Jews, Muslims and immigrants. This paragraph also captures how O'Malley's essential conservative intellectual approach to issues was always more compatible with liberal politics than many people on the left or right cared to notice:

"As a Catholic bishop I welcome the opportunity to stand with other religious leaders of the land in opposition to the voices of fragmentation and hatred. As the Archbishop of Boston, it is my responsibility to call the Catholic community which I serve to remember the basic truths of faith and reason which are so central at this moment. The truth that our rights and our duties to each other derive from God. The truth that we can successfully oppose hatred and bigotry by civility and charity. These truths can bind us together across racial, religious and ethnic communities. They can help us celebrate our pluralism as a rich treasure which strengthens this land."

The church is well blessed to have this distinguished and intelligent prelate advising the pope and helping to guide his fellow American bishops.

And, a group of organizations representing religious men and women issued a statement yesterday that went beyond condemning the neo-Nazis and also chided those who were slow or ambiguous in their response. "We are equally indignant at the initial lack of strong condemnation by name of these groups by our government leaders, including our President, as well as the initial silence of many political and faith leaders that only enables and empowers those who espouse such hatred, racism, and violence," the text read.

Read this next: Editorial: Charlottesville should compel Catholics to expel poison of racism

The lines are drawn. Those pastors who continue to defend the president have now placed themselves outside the bounds of decency. Those staffers who continue to work for the president cannot escape the label, the dreadful label, of collaborateur. (Nicolle Wallace had one of TV's best moments in the minutes after the president's press conference when she asked who in the White House was going to resign.) Those Republican members of Congress who denounce racism but do not denounce the president who coddles it have lost any claim to moral respect.

It is time for Christian pastors to refuse to go to the White House for any reason. It is time for foreign nations to refuse to invite the president for meetings. It is time for politicians to be hurled out of office if they dodge the issue. It is time for staff to contemplate the stain upon their conscience if they continue to enable this man, and if that stain will prove indelible. Either we are a nation that makes excuses for racists and neo-Nazis or we are not. "Once to every man and nation," we sing in the old hymn, "comes the moment to decide."

*This column has been updated to correct the spelling of Anna Floerke Scheid's name.