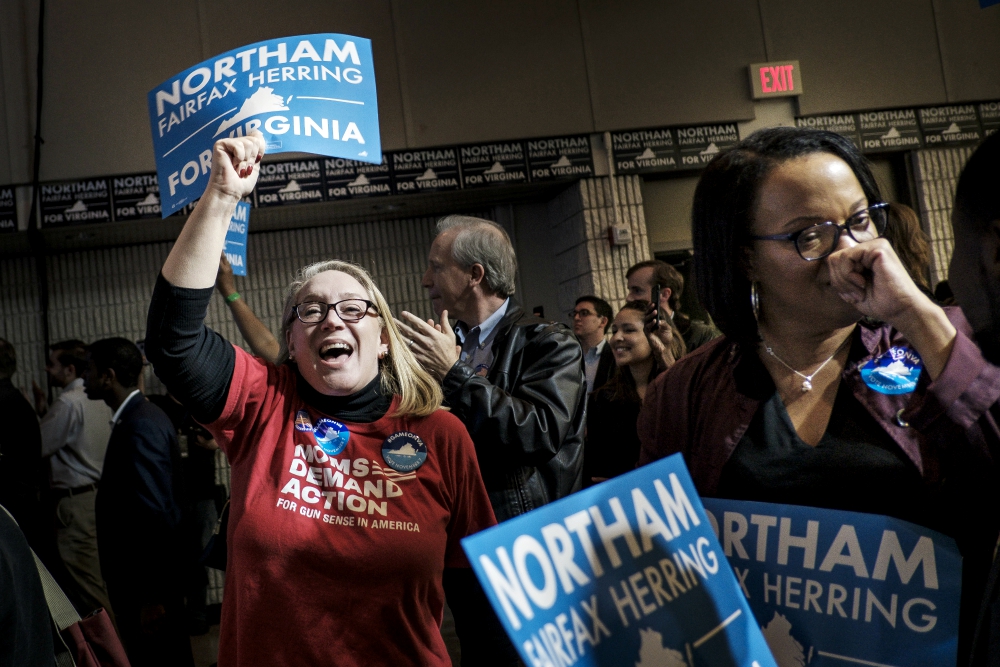 Tuesday night's election sweep for the Democrats has some immediate implications, and some more distant possibilities, all of which warrant attention.

The most obvious conclusion is that Democrats are more energized than Republicans are. In Virginia's highly contested gubernatorial contest, the Republican candidate, Ed Gillespie, did better than previous candidates in the conservative rural areas of the state, but he was overwhelmed by the heavy turnout in Northern Virginia, the most blue section of the Commonwealth. Turnout overall on was higher than it has been in 20 years, and in Northern Virginia, Lt. Gov. Ralph Northam, the Democratic candidate, led by more than 260,000 votes.

In the later stages of the campaign, Gillespie started evoking the alt-right, white-nationalist themes that propelled Donald Trump to victory. He pledged to retain statues to the heroes of the Confederacy and he ran ads with heavy racial overtones.

It didn't work, in part because Gillespie himself is so obviously a creature of the Establishment. But it also did not work because people do not like the divisiveness they see coming from the White House day in and day out. Unaffiliated voters, swing voters, are moved by such atmospherics. They may have backed Trump last year because they wanted a change, but they are far from happy with what they got.

Northam's surprisingly large win produced coattails. Going into the Nov. 7 election, the GOP controlled fully two-thirds of the seats in the Virginia House of Delegates. The Democrats were hoping to pick up half a dozen, maybe even 10 if they had a great night. At present, they have picked up 15 seats and four are going to a recount. If they win two of those seats, they will have flipped control of the legislature.

That kind of win is about more than coattails: It means the Democratic brand is in better shape. It is the kind of information that scares House Speaker Paul Ryan and Senate Majority Leader Mitch McConnell. A wave like that, if it goes nationwide, could sweep them out of their majorities in Congress.

The midterms are a year away, however, and there is a more immediate short-term effect from Tuesday night's voting: It makes it harder for the GOP to pass its tax overhaul legislation. Even Sen. Orrin Hatch admitted as much.

Members of Congress are always reluctant to take a tough vote, but if the wind is at their back politically, they will do it. The wind is not at the GOP's back. The Republican leadership is counting on the votes of members who represent states with relatively high state and local taxes, all of which are currently deductible on your federal tax forms. The GOP proposal continues to allow the deduction of property taxes, but not state income tax. That provision was a tough sell before Tuesday's results came in. Now, it is a much larger hurdle.

In an effort to keep the tax overhaul from exploding the deficit, Republicans are toying with the idea of using tax reform to eliminate the individual mandate under the Affordable Care Act. This could save $338 billion, according to the nonpartisan Congressional Budget Office. That could offset the restoration of the deductibility of state and local income taxes.

But such a move would entail ignoring two key data points from Tuesday's results. Twenty-four percent of Virginia's voters said that health care was the most important issue affecting their vote, more than any other issue. Forty-three percent said it was a very important issue. And, in Maine, voters decided to expand Medicaid in the state with 59 percent supporting the expansion. This was over the objections of the state's governor.

If the Republican leaders take another stab at repealing part of Obamacare, they are not putting their necks on the line, they are putting them in the guillotine.

Democrats need to make sure they do not overlearn the lessons from Tuesday night's victories. Virginia has been trending blue for a long time as demographic changes give the suburbs of Washington more and more clout. Hillary Clinton lost many swing states, but she won Virginia a year ago. Northam was a great candidate for the state, his gentlemanly personal demeanor harkening back to a less divisive time in our political life, his positions on issues liberal but not crazy. His opponent in the primary, Tom Perriello, did not sit on his hands but campaigned aggressively for Northam.

In New Jersey, the win in that governor's race was completely unsurprising: The incumbent, Gov. Chris Christie, is the most unpopular governor in the country.

It will take a bit longer to discern the tea leaves on the Democrats' surprisingly strong showing in Virginia's legislative races.

One thing was very telling: On election night, Danica Roem, the first openly transgender candidate to win a seat in the House of Delegates, was interviewed by Lawrence O'Donnell on MSNBC. O'Donnell kept wanting to talk about her being the first, but Boehm kept talking about the needs of her constituents and the issues they talked to her about on the campaign trail. The exchange highlighted the divide between elite liberal media and what candidates need to do to win elections.

The Democrats had a good night, but they are still 0-5 in special elections to fill vacant congressional seats. Trump has terrible poll numbers, but the economy is posting strong numbers, and felt content usually matters more than a distant discontent when voters go to the polls.

The Democrats still need to break away from the identity politics that prevents them from fashioning a compelling message that unites all Americans. And they still need to find a way to better appeal to rural voters: Even while winning statewide, the Democrats were trounced in the small towns and villages of Virginia. In many states, there is no equivalent of the Northern Virginia suburbs to offset the increasingly solid red in rural areas.

For Catholics and Catholic leaders who care about social justice, the most disturbing thing we learned on Tuesday was just how polarized the country remains. The good news is that if you get the right candidate, who addresses issues of social justice like health care in a compelling way, that candidate can win and win big.

It doesn't mean candidates like Northam will win everywhere. But, still, in the age of Trump, it was good to see an electorate rise up and say, "No!"