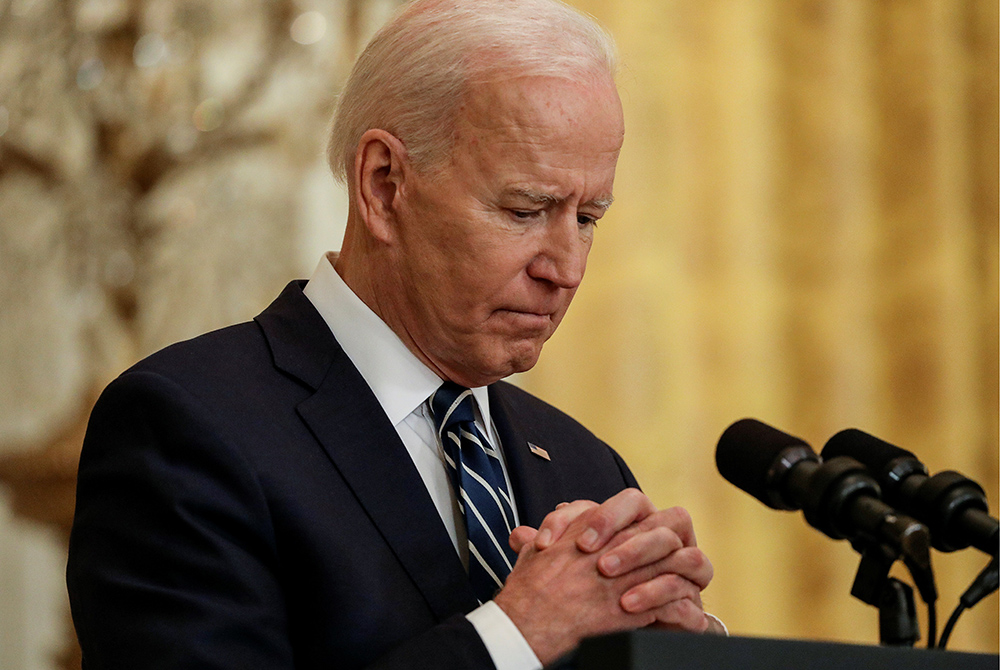 If we are honest with ourselves, all Catholics should approach the Eucharist in fear and trembling. It is like the words "Thy will be done" in the Lord's Prayer: We say them sometimes without thinking of their dreadful meaning, when we should always ponder the crucified Christ when we utter those words. But we also should approach the Eucharist in hope and confidence. However great our sins, God's mercy is yet greater.

That goes for President Joe Biden too.

I do not know what goes through Mr. Biden's mind when he stands in line for Holy Communion. I suspect that the responsibilities of his office awaken in him a humility that is quite astounding, as he carries burdens most of us can only imagine and that he cannot really share with anyone. If he turns to the Mass for solace or comfort or inspiration or grace, thanks be to God.

In truth, we do not even know how frequently he takes Holy Communion because the press pool is not allowed in the church. On the morning of Biden's inauguration, cameras were permitted at the very beginning of the Mass, to show the assembled political leaders, but the photographers were then escorted out before the Eucharistic canon. The Catholic Mass is never private — the angels are always present! — but Biden has never sought to exploit his attendance for politics. He discusses his religion the way he discusses his parents or his wife, as a necessary part of any effort to explain himself to others.

I do know this: Whatever is going through his mind is a matter for him and his pastor, and his pastor is not Archbishop Joseph Naumann of Kansas City, Kansas, who was quoted in last week's AP story explaining why the U.S. bishops' conference should draft a document that makes it clear Biden should not present himself for Communion.

Archbishop Samuel Aquila of Denver, who was also quoted advocating for the conference to adopt a national policy on the matter, and clearly favoring denial of the sacrament, is not Biden's pastor either. Nor is San Francisco Archbishop Salvatore Cordileone, who issued a pastoral letter on the subject Saturday, a document that exiles important qualifications and elides important facts in its relentless effort to reach the narrowest moral analysis possible. 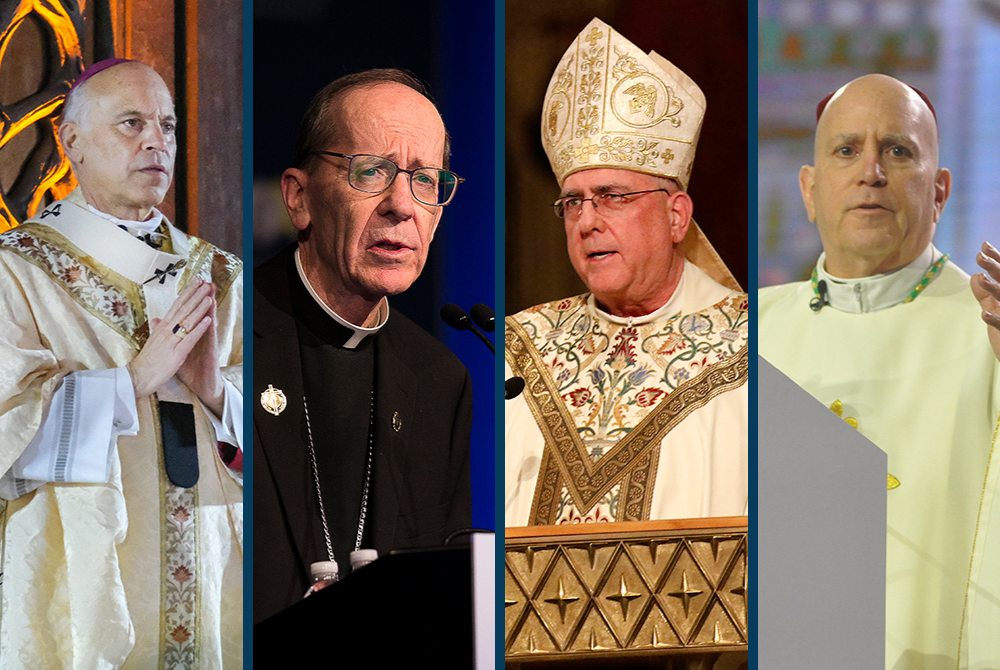 Bishop Thomas Olmsted of Phoenix issued his own pastoral letter on the subject of the Eucharist in April that makes it clear he is part of the cabal as well.*

What is going on? Naumann, Cordileone, Aquila and Olmsted are not stupid men. They know that a bishops' conference has no role in this matter, that Biden is a baptized Catholic, subject to canon law, and that canon law leaves this issue entirely to Biden and his pastor. They know, too, that persisting in this effort will further divide their own organization, pitting bishop against bishop on a highly public issue that is emotionally fraught and involving issues that are easily misunderstood and even more easily enflamed to affect emotional manipulation. They also know that a teaching document requires a two-thirds majority vote, and it is highly doubtful they would achieve that, and such a document requires the approbation of the Holy See, which is even less likely.

It seems obvious to me that this rush to draft a document is the ecclesial equivalent of the effort by Republican officials to cast doubt on results of the 2020 election, an effort to delegitimize Biden in the public's mind.

It seems obvious to me that this rush to draft a document is the ecclesial equivalent of the effort by Republican officials to cast doubt on results of the 2020 election, an effort to delegitimize Biden in the public's mind. This conflation of politics and religion is evident in the fact that a political organization, CatholicVote.org, is one of the principal advocacy groups fomenting this campaign about sacramental discipline.

Naumann raises the issue of scandal, that Biden's dissent will lead other Catholics to sin. He told the AP: "It can create confusion. ... How can he say he's a devout Catholic and he's doing these things that are contrary to the church's teaching?"

As I have written before, it is foolish to think that Biden going to Communion will confuse anyone about what the church teaches regarding the evil of abortion. Is there anyone who does not know the church's position? No. Why then, this crusade?

There are some Catholics for whom opposition to abortion has become the key to their religious and political identity. There are worse markers of identity a person could adopt. There are people whose political and religious identity is wrapped in racism, for example. But there's the rub. In the current political climate, and certainly in the last election, making abortion the determinative issue required winking at racism — and at misogyny, and nativism, and indifference to climate change, and, finally, a fascistic willingness to overturn election results. 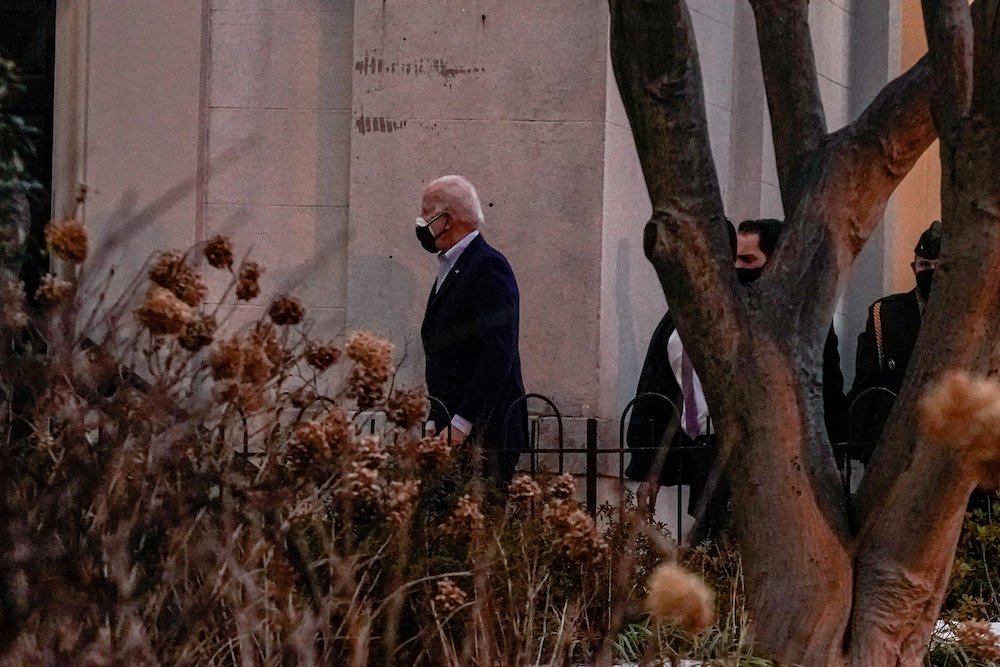 Biden does not do that. If he is wrong — and I think he is — he is wrong about how to properly relate a Catholic's necessary commitment to the protection of all human life with the political realities he faces. My Catholic friends who are Republican face the exact same kind of difficulty on other issues.

I wish both sides would try and convince their fellow politicians and the public at large that the church is correct — about abortion, about immigration, about poverty, about the environment, about racism, etc. — but instead they try and claim that the Gospel prioritizes their partisan issues and permits us to make excuses when that claim is demonstrably false. It is difficult to know how sincere they are. Self-interest is strong in all human hearts, and especially in the heart of a politician. It is easy to see that many draw the lines in the wrong place or rationalize poorly why they draw the line where they do. No one should expect theological fluency from a politician.

In any event, what cannot be done is elide the difference between the perpetration of an evil act and engaging in the politics that surround evil acts. I do not believe all Republicans who voted for Donald Trump are racists. I believe they made a prudential decision that Trump's race baiting was something they could tolerate because of his stance on other issues. That is exactly the distinction I drew when I cast my ballot for Biden last year. Yet, by the logic of these bishops, should I be denied Communion also?

The Congregation for the Doctrine of the Faith, in 2002, addressed the issue of Catholics engaged in political life. The text reflected the fact that its author, then-prefect Cardinal Joseph Ratzinger, hailed from a relatively non-pluralistic country with an historic Christian culture, in which the acids of modernity were doing their work. As an American, I would have said it differently, but the text causes no doubts, only a few difficulties. The document exhibited Ratzinger's well-known abhorrence of relativism. And, quoting Pope John Paul II's encyclical Evangelium Vitae, it minces no words about "the 'grave and clear obligation to oppose' any law that attacks human life" (Paragraph 4).

In the very next paragraph, however, the document does balance its emphasis, placing the abhorrence of relativism and the gravity of that obligation in perspective, stating:

In this context, it must be noted also that a well-formed Christian conscience does not permit one to vote for a political program or an individual law which contradicts the fundamental contents of faith and morals. The Christian faith is an integral unity, and thus it is incoherent to isolate some particular element to the detriment of the whole of Catholic doctrine.

The document goes on to list those fundamental issues of faith and morals, none of which can be ignored or dismissed by a well-formed Christian conscience: abortion, euthanasia, the misuse of embryonic stem cells, family life, parental rights in education, protection of minors, modern forms of slavery, religious freedom, a just economy, and peace.

I think that today, reflecting the magisterium of Pope Francis, we might place concern for the environment on the list, perhaps listing it alongside abortion and euthanasia, recognizing environmental protection as necessary to the defense of human life in our day. Reflecting the magisterium of Pope Benedict XVI, and specifically his encyclical Caritas in Veritate, concern for a just economy might have received a more fulsome treatment or at least placed higher on the list.

It does not take much experience of politics in the United States to recognize that no political figure in our time scores 100 on that list of fundamental moral concerns. So we are choosing among flawed candidates and parties from the get-go. We can prioritize certain issues based on the political exigencies of the moment, or the nature of the office a candidate seeks and their ability, if elected, to affect an issue that is both morally grave and politically ripe.

What does scandalize us is that the bishops would engage in this kind of hyper-partisan willingness to highlight some issues and ignore or denigrate others. It is they who "isolate some particular element to the detriment of the whole" yielding the very adjective they now seek to employ: incoherence.

We know a lot about the sacraments, about the action of grace, but we do not know all. Of course, incoherence is a bad thing, not a good thing. But arguing that we can ascertain the state of a politician's soul based solely on their public policy stances requires a knowledge we cannot possess.

The sacraments, by definition, bring the Mystery of our faith into our mundane world, but the effects of that Mystery on the human soul are hidden as clearly as the real presence of Christ in the Eucharist is hidden from our eyes. It looks like bread.

Biden is a sinner because we all are sinners, but to assess the state of his soul when he approaches the altar requires seeing what it is difficult to detect in ourselves, let alone in another person. God knows the state of Joe Biden's soul. God has, in his mercy, provided Biden a pastor in the person of Cardinal Wilton Gregory. We must all pray that God's grace is at work in the president's soul — and invite him, a fellow Catholic, to pray the same for us.

The U.S. bishops' conference has no canonical or practical role to play in this matter. Some of them have drunk their own Kool-Aid and can't bring themselves to accept that Biden is a legitimate president and a more observant Catholic than most. In fact, it drives them crazy, so crazy they will themselves into a profound misunderstanding of basic issues of theology and canon law. By cloaking their essentially political objective in religious garb, these bishops are undermining the faith in ways Joe Biden never will. That is the scandal here.

*This article has been updated to correct the date of the pastoral letter.

This story appears in the Bishops, Biden and Communion feature series. View the full series.
A version of this story appeared in the May 14-27, 2021 print issue under the headline: Weaponizing the Eucharist: The bishops, not Biden, cause scandal.