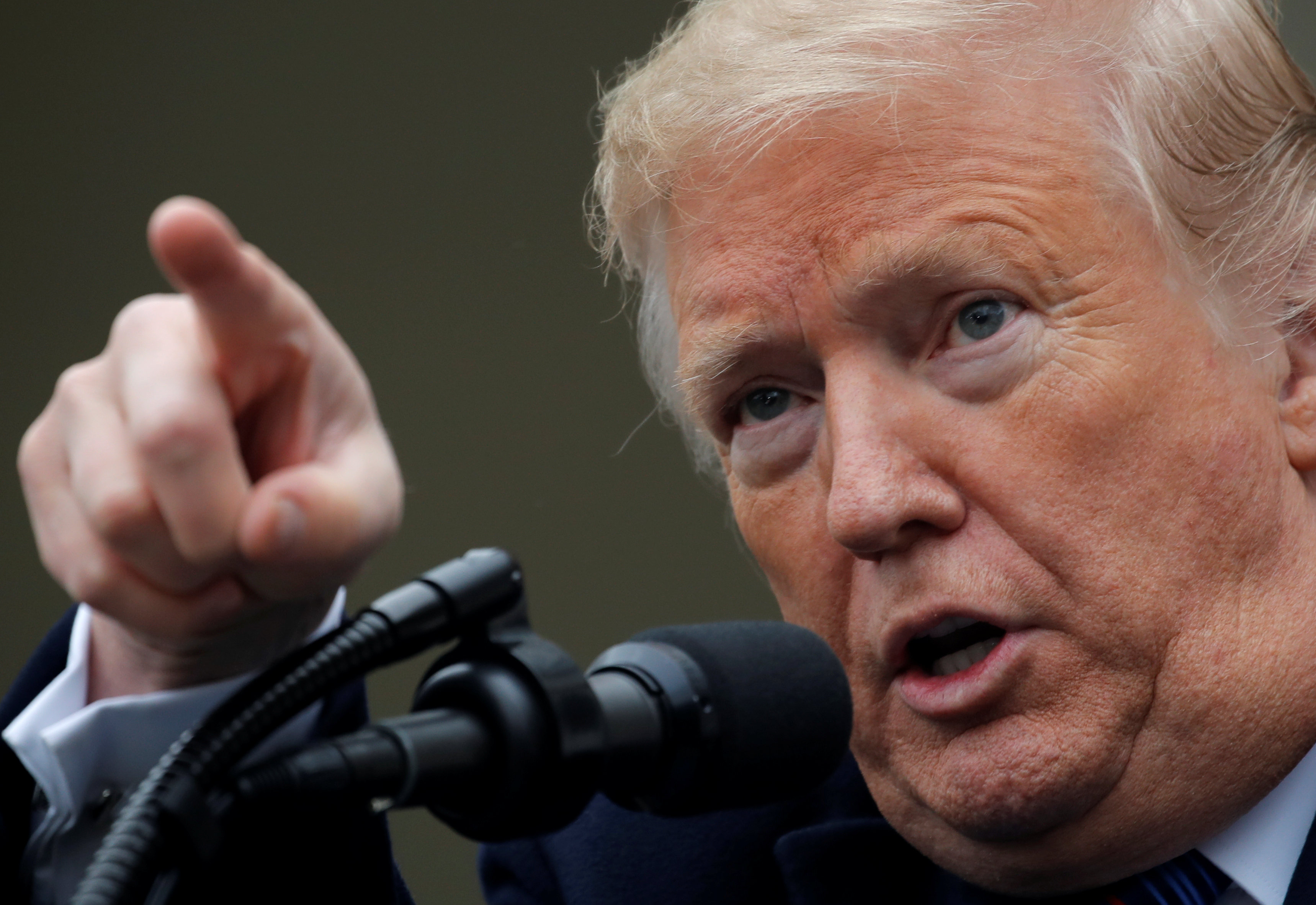 Michael Cohen's testimony before Congress, combined with the House Judiciary Committee's issuance of a request for information from 81 people in the orbit of President Donald Trump, focused the nation's attention on the increasingly difficult-to-avoid conclusion that our president is, in technical, legal terminology, a crook. What is to be done? And who is to do it?

Let's start with the second question first. Special counsel Robert Mueller and the prosecutors for the Southern District of New York are surely aware that Mr. Trump must not be treated with kid gloves because he is the president, but he must be treated differently. That is, no one is above the law, but the law must take account of the fact that it is aiming at the chief magistrate in the country, duly elected to office, and consequently, that any legal action is also a political action and, quite likely, a constitutional one. That is why I said at the beginning of the year that I hope Mr. Mueller understands he needs more than a smoking gun to charge the president with collusion with the Russians, he needs a smoking cannon. The evidence the prosecutors present must be virtually incontrovertible.

You saw the difference in the Cohen testimony. Conservative defenders of the president attacked Cohen's credibility, and there was much to attack. Mr. Cohen is, after all, about to go to prison in part because he lied to Congress previously. And, it seems likely he lied again last week when he said he had not sought a job in the White House. On the other hand, Cohen produced a check. That is incontrovertible evidence. It included the president's signature. It was dated after the inauguration. You can ignore it, and Fox News did precisely that, but you can't argue it away. In short, prosecutors will need something like an audiotape of Trump saying, "I don't care if it is illegal, do it anyway."

Prosecutors, and subsequently House Democrats, must also consider which crimes the president may have committed warrant prosecution or impeachment proceedings. This article from Brookings by John Hudak notes that Republicans still believe the president did not collude with Russia and are not convinced that other crimes should be on the table: The Mueller investigation was started because of allegations of collusion with a foreign adversary, an allegation that truly does outstrip most others.

Hudak correctly notes that partisans will not be afraid of their own hypocrisy if Mueller or the Southern District prosecutors bring forth charges of illegal activity, but do not produce evidence of collusion with the Russians. Republicans impeached Bill Clinton because he lied under oath and obstructed justice in the Ken Starr investigation. That investigation, recall, began with a real estate transaction in Arkansas, Whitewater, but grew to include Monica Lewinsky's affair with the president, an affair which probably was not illegal itself, but there is no doubt the president lied about it. That will not prevent them — indeed they have already started — from arguing that similar obstruction of justice charges are "process crimes," the kind of thing that routinely happens in investigations, surely not the stuff of an impeachment. Similarly, campaign finance laws are broken all the time, usually inadvertently, and Republicans will be sure to minimize any such violations.

It is a sad day when the nation's chief executive, who swore an oath to uphold the laws, can dismiss obstruction of justice as a "process crime," but how can the Democrats object? During the impeachment of President Clinton they were quick to dismiss the significance of the fact that the president lied under oath, to say nothing of the fact that he engaged in sex with a subordinate.

The Constitution does not define "high crimes and misdemeanors." The reason Trump and his TV lawyer Rudy Giuliani have been so intent on setting the goal posts within easy reach of their kicks is because they know the definition of those terms are political, not legal. They know that, legally, they can fall back on the Justice Department's policy that says you cannot indict a sitting president. Politically, they know that so long as the Republicans stick together behind the president he will not be removed from office in an impeachment proceeding, that an acquittal in the Senate would be seen by many as a vindication of his conduct. And such an acquittal would be claimed as evidence that the Democrats really were on a witch hunt.

What to do? We can hope that, if there is no hard evidence of collusion with the Russians, the prosecutors have overwhelming evidence of other criminal activities not only against the president but against his children. That would permit the kind of plea bargain that could remove the whole sordid ordeal from political considerations. Of course, Mueller would have to insist that the president allocute to any crimes he is pleading to. There must be nothing for Sean Hannity and Laura Ingraham to spin.

If not, if Mueller simply turns a report over to the attorney general and Congress continues its own investigations, Democrats must resist the urge to impeach. Yes, this would mean that the president is seen to be above the law, at least until he is out of office. But, impeachment must never be used as a partisan tool. Never. Unfortunately, it was designed precisely for the circumstance we are in, a rogue president conducting illegal activities that undermine our democratic institutions, but given the hyperpolarized political environment, it is more important that the Democrats conduct themselves in such a way that they would themselves be able to govern in the future. It will fall to them to restore faith in democracy, and they can't do that if they have led an unsuccessful effort to remove the president from office.

N.B.: This aversion to impeachment is made more necessary because Tom Steyer has been running ads since the beginning of Trump's presidency calling for it and some Congresspeople have done the same, making the Mueller investigation appear partisan even though it has not been.

Democrats should rely on that same Justice Department policy about not indicting a sitting president that Giuliani relies on. Let them pursue their investigations. Let the evidence against the president — of campaign finance violations, of payoffs, of money laundering — let it all be brought into the public domain. Let the president run for reelection with all that nasty stuff just sitting there. But, only take legal action once he is out of office. The country will survive two more years of this brutish man, but our democracy would be imperiled perhaps beyond repair if impeachment is to become a normal method pursued by the opposition party.

Can the Democrats exercise this degree of self-restraint? A completely unrelated episode this week suggests the answer may be "no." Speaker of the House Nancy Pelosi intended to bring a resolution condemning anti-Semitism to a vote, in response to freshman Rep. Ilhan Omar's outrageous accusation of dual loyalty against Jews. The Democratic caucus meeting was turbulent after some objected to the proposed resolution. Why were they singling out Omar and not, for example, the president? Truly his bigoted comments were more frequent and more destructive, yes? The answer is simple, but none of the reporting indicated any Democrat hit on it: Because we are better than that.

Still, let me not leave the impression that there is any moral equivalence between the Democrats and Republicans. It is the Republicans who have saddled the country with the most corrupt and dangerous president in our history. He is the first president over whom the Russian government has had leverage: We may never know all the details of Trump's negotiations for a real estate deal in Moscow while the 2016 campaign was in progress, but we know now he was lying when he said that he had no business dealings with the former Soviet Union. What is more, at the time, Vladimir Putin knew that Trump was lying, and that gave him leverage. Perhaps Mr. Putin knows more and still has leverage. The fact that Republicans are willing to ignore that possibility is genuinely horrifying.

The other night a friend recalled the late Daniel Patrick Moynihan's famous essay "Defining deviancy down." He thought it an apt description of what is going on in our country and, of course he is right. Unless the Republican leaders in Congress come to their senses, and care more about the Constitution than their constituents' biases, the answer for the Democrats cannot be to join the decline, but to resist it. They must define deviancy period, and let the American people, and the American courts, decide what fate should await President Trump.

A version of this story appeared in the March 22-April 4, 2019 print issue under the headline: Cohen's testimony raises questions about Trump.