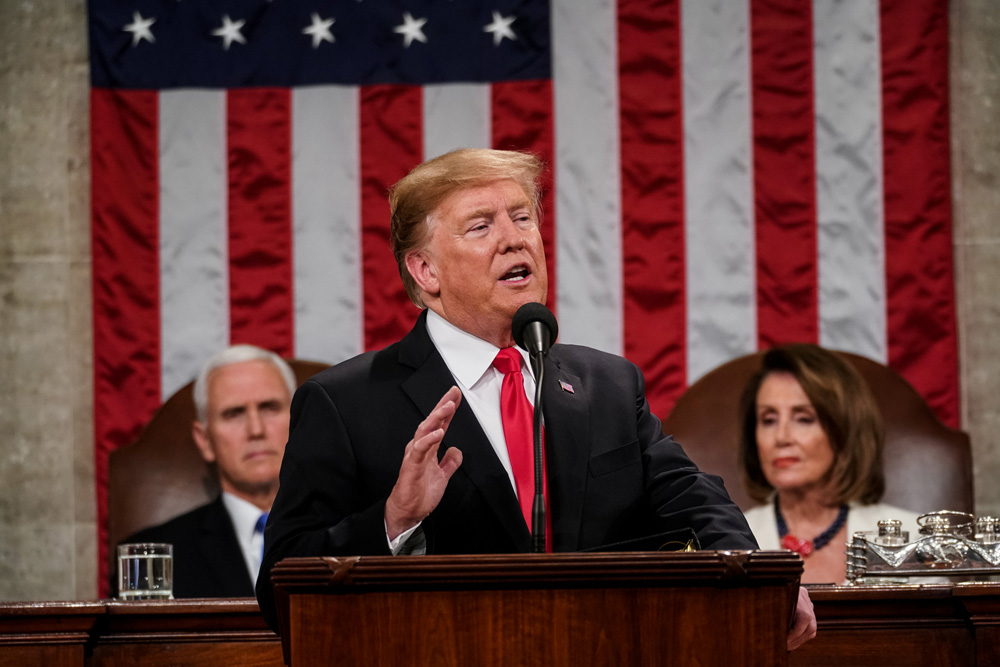 The weight of one too many outrageous assaults on our democratic institutions has finally tipped the scales. Formal impeachment proceedings against President Donald Trump are underway.

In announcing the proceedings, House Speaker Nancy Pelosi, D-Calif., stated, "The actions of the Trump presidency revealed the dishonorable fact of the president's betrayal of his oath of office, betrayal of our national security and betrayal of the integrity of our elections."

What tipped the scales was Trump's acknowledgement that, in a July 25 phone call with Ukrainian President Volodymyr Zelensky, he had sought the assistance of that foreign power in damaging his principal political opponent in the 2020 presidential race, former Vice President Joe Biden.

Formal impeachment was a line that had split the ranks of Democrats. Pelosi herself has for months been reluctant to entertain the idea, calculating that it would backfire politically and that the focus, while investigations of Trump continued in multiple directions, should be on removing the president through election next year.

Her original position, which antagonized those farther left in the party, was bolstered by moderate Democrats from conservative districts worried about what endorsing impeachment would mean for their reelection prospects.

The irony, of course, is that it was those same moderate Democrats who jumped on the impeachment side of the scales when the news first hit about a whistleblower who has been prohibited by the administration and in violation of federal law from sharing his formal complaint with Congress. According to reports, the nature of the alleged offense involving national security issues and an apparently bold invitation to a foreign power to interfere in a U.S. presidential election was enough to push many moderate Democrats over the edge.

Reporting on the issue by The Washington Post shows that while the proximate causes of the impeachment action — Trump's phone call and the administration's stonewalling of the whistleblower account — have turned minds, the story is far more complex. Those events are embedded in extended attempts over months by Trump's personal attorney, Rudy Giuliani, to manipulate the Ukrainian government for political ends beneficial to his client.

That reporting depicts deep rifts within the White House over secrecy that prevailed in Trump's dealings with Ukraine, his sidelining of experts, including then-national security adviser John Bolton, and the involvement of Giuliani in scheming a strategy that remained out of sight of most normal foreign policy experts' decision-making processes.

Impeachment is an imprecise exercise. Pelosi provided no details regarding how the process would move forward, its scope, or how long it would take.

Only two presidents have been impeached, Andrew Johnson in 1868 and Bill Clinton in 1998, and each was acquitted and completed their terms.

If the initial work of an impeachment investigation is less than clear, the Senate's role, should it reach that level, is a completely make-it-up-as-you-go-along enterprise, if precedent is any indication. And the Republican-controlled Senate can simply end the process before it begins, avoiding the task of even coming up with rules for a trial.

To see value in this undertaking requires looking beyond the politics, a thick part of any impeachment process, to principle. Early on, the calculation was that impeachment would backfire on Democrats at the ballot box next year. That's allowing Trump to run the table without any hope of holding him accountable.

It may be of little consolation immediately, but engaging a process that attempts to get at the truth and hold this president — incomparably dismissive of democratic institutions and protocol — accountable for at least some of his destructive behavior is well worth the effort. If for no other reason, then for history's sake. Our democracy and the integrity of the elections that undergird it deserve our best shot.

A version of this story appeared in the Oct 4-17, 2019 print issue under the headline: Impeachment inquiry is well worth the effort.