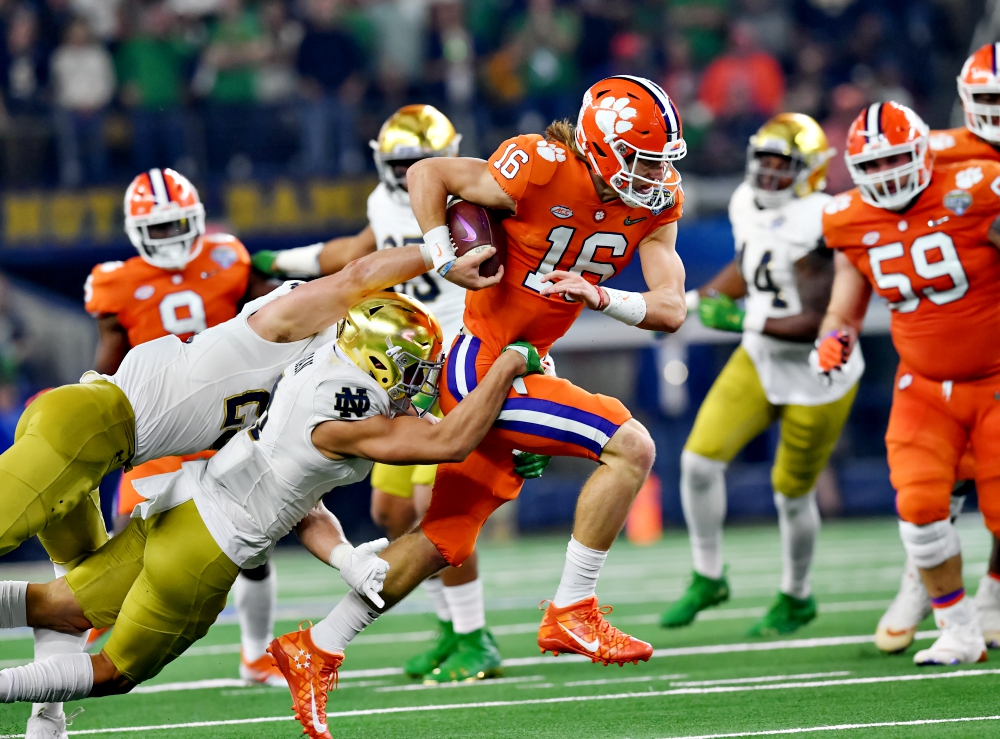 The month between the University of Notre Dame football team's last regular-season game and its appearance in the College Football Playoff semifinal was a wonderful time of celebratory anticipation for Fighting Irish fans like me.

After an undefeated 12-0 campaign, Notre Dame was ranked third in the country and was set to play Clemson University for a spot in the national championship game. The Irish hadn't won a title since 1988 and the team has been pretty bad for large chunks of the three decades since then, so the excitement level across the fanbase was sky-high.

If an article, video or podcast about the team popped up on my social media feeds in the first few weeks of December, I was all over it. I talked myself into the team's chances of pulling off a victory, even though they were significant underdogs. I was pumped.

Then, the game happened.

Notre Dame got trounced, 30-3, not even coming close to scoring a single touchdown. It was not fun. Afterward, everyone had a thought about the state of the Notre Dame football program and what it would need to do to have a chance to compete consistently with the best teams in the sport. I had to stay off Twitter for a while for sanity's sake.

The pain was mollified slightly by Clemson destroying the vaunted University of Alabama team by an even wider margin the following week — hey, at least we lost to the eventual champs — but it was still a painful end to an otherwise incredible season.

In the weeks since the game, I've been thinking a lot about the nature of sports fandom — particularly, my own sports fandom as a person who also takes my Catholic faith seriously. How do those things fit together?

As only one team can win a championship each year, odds are you're going to be disappointed by sports outcomes way more often than you're pleased. And that disappointment can sometimes grow into things like anger, frustration or grumpiness, or even bubble over into antisocial behaviors like door-slamming or loud cussing in front of one's preschooler (not that I have any experience with that). These are things I try to avoid in the spiritual life. If sports aren't helping me love God and neighbor better, should I quit? Didn't Jesus say to cut off your hand if it causes you to sin?

A key part of No. 2 is to cultivate what St. Ignatius of Loyola called "indifference." In Ignatian spirituality, "indifference" doesn't mean not caring, as writer Marina McCoy points out in a short, lovely introduction to the principle. Instead, "indifference means being detached enough from things, people, or experiences to be able either to take them up or to leave them aside, depending on whether they help us 'to praise, reverence, and serve God,' " McCoy writes. "In other words, it's the capacity to let go of what doesn't help me to love God or love others — while staying engaged with what does."

I do think that sports fandom does sometimes help me love others better, especially when it's a source of joy, community or fun. I admit that a fun victory for one of my favorite teams can put a pep in my step for a few days. When fandom isn't those good things, though, indifference tells me I should leave it aside — maybe not permanently, but for as long as necessary.

First of all, it takes a lot of paying attention to my reactions. If a disappointing loss affects my mood for more than 15 minutes, I should probably re-evaluate the depth of my emotional investment in a team. If I post anonymous angry messages on an online message board about the team I "support," I should probably delete my account. If I find myself thinking vitriolic thoughts about an athlete or coach I'll never know personally, I should probably pray for forgiveness and go play with my kids.

There are also some proactive indifference habits I try to work on. One of these is to repeat the mantra my friend Chris Wilson uses all the time in his Notre Dame football newsletter: Winning is hard. Or as Tom Hanks' character Jimmy Dugan says in "A League of Their Own," "It's supposed to be hard. If it wasn't hard, everyone would do it. The hard is what makes it great." This perspective helps me manage expectations. Failure by the teams I like is OK because success in high-level athletics is really, really difficult.

Another proactive indifference practice? Give up following a team for a while if they're bad and not bringing me any happiness. Some people call this fair-weather fandom or bandwagon-jumping. Look, loyalty is important. Loyalty to people you know in real-life situations, that is. Loyalty to sports teams is not a similar virtue. If my hobby makes me angry, why not pick another hobby for a while? There are so many hobbies out there. I need to save my anger for truly important things.

I like to think I'm better at indifferent fandom than I was five or 10 years ago. I think about the Clemson loss every week, but probably not every day. I don't mope as much. I try to be grateful for the 12 wins instead of wallowing in the single, devastating loss.

If Ignatius were alive today, I hope he, after learning about American football and college sports and Twitter and the rest of this inanity, would be proud of me for trying.