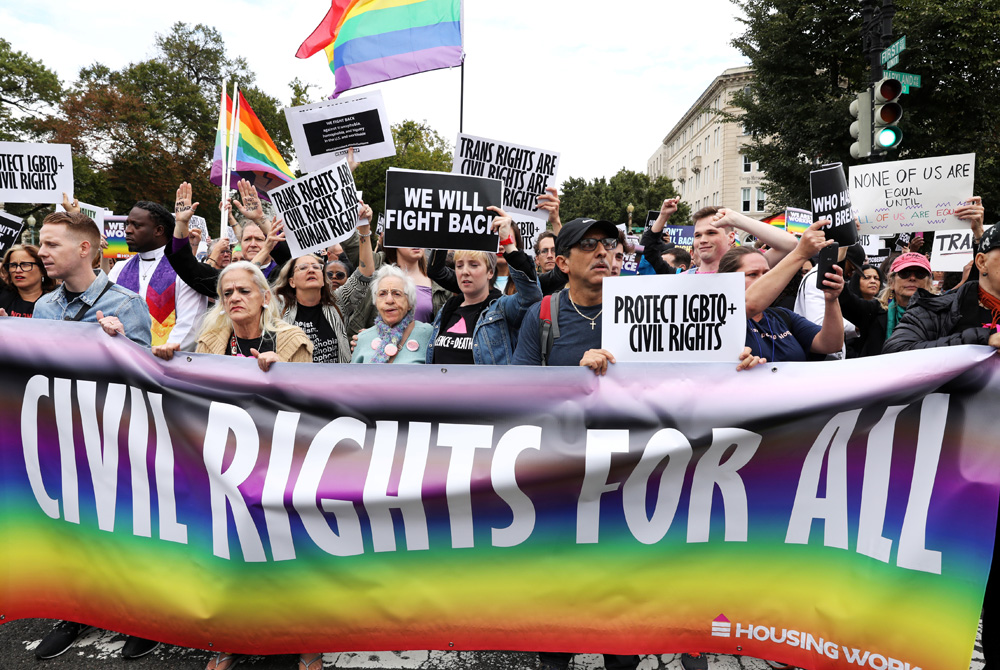 Activists and supporters block the street outside the U.S. Supreme Court in Washington Oct. 8, 2019, as it hears arguments in three major employment discrimination cases on whether federal civil rights law prohibiting workplace discrimination on the "basis of sex" covers gay and transgender employees. (CNS/Jonathan Ernst, Reuters)

The institutional Catholic Church rarely provides spaces that are truly psychologically and spiritually safe for LGBTQI Catholics. Step into most parishes and there is a high risk of hearing a homily or reading something in the bulletin that is homophobic or transphobic.

Of course, some bishops seem to enjoy upping the ante on their anti-LGBTQI stance. When it comes to raising the stakes, few have been as extreme or inventive as Bishop Thomas Paprocki of the Springfield, Illinois, Diocese.

Some may remember back in November 2013 when Paprocki held a liturgy of "Prayers of Supplication and Exorcism in Reparation for the Sin of Same-Sex Marriage," on the day the Illinois governor signed a same-sex marriage bill into law.

He followed that up in 2017 with a policy banning all Catholics in same-sex marriages from taking the Eucharist, from being sponsors for Baptism or Confirmation, and from participating in any public liturgical function. He even banned them from receiving a Catholic funeral, "unless they have given some signs of repentance before their death."

In 2014 Paprocki told Lifesite News that being opposed to same-sex marriage was "a very loving thing."

Well, Paprocki is now spreading his peculiar kind of love to transgender persons by releasing a new pastoral guide on gender identity.

This move is the latest sign that some Catholic leaders, having lost their vociferous and well-oiled campaign to defeat marriage equality, have now put trans folks in their crosshairs.

The guide opens up with the claim that persons with "gender dysphoria," must be treated with "gentle and compassion pastoral skill" and that "all forms of discrimination and harsh treatment must be strongly resisted and corrected." But what follows is anything but gentle and, in fact, is quite harsh.

"A person cannot change his or her gender," the guide states plainly. "A person should accept and seek to live in conformity with his or her sexual identity as determined at birth."

Quoting a general audience that Pope Francis gave in 2015 in which he said, "The removal of [sexual] difference in fact creates a problem, not a solution," the guide also states that "it is imperative to be clear on the reality of human biology as a gift from God that we cannot change."

"Fueling the confusion that families face in these circumstances is not merciful," it notes. And anyone who wants to support a transgender child or family member with a sentiment of "whatever is going to make them happy" has fallen victim to a culture that "promotes a false and overly sentimentalized conception of love."

And then, of course, Paprocki digs up LGBTQI Catholics' least favorite phrase, writing "the removal or destruction of healthy sexual and reproductive organs is a type of mutilation and intrinsically evil [emphasis mine]. Procedures, surgeries, and therapies designed to assist a person in 'transitioning' his or her gender are morally prohibited."

But Paprocki is not content to leave the condemnations there, and instead adds this startlingly callous analogy:

"With this teaching in mind, Gender dysphoria can be reasonably compared to anorexia. Each is a condition in which a person, for a complex set of reasons, has a self-perception of his or her physical biology that is dislocated from reality. Just as it would be pastorally reckless to provide weight-loss resources to a visibly gaunt anorexic who thinks she is overweight, it is equally reckless to encourage someone with gender dysphoria to undergo hormone treatment and/or genital mutilation."

In his most breathtakingly contradictory moment, he follows this paragraph with these words: "None the less, the presentation of this truth must be made with love, compassion, and patience."

And then come the punishments. Though students who have "gender dysphoria" will not be denied admission to a Catholic school, all use of pronouns, all documents and records, and the use of bathrooms and locker rooms must accord with the biological sex assigned at birth.

"A student of any Catholic school who insists, or whose parents insist, on open hostility toward, or defiance of, Church teaching, or who otherwise intentionally violate this policy, may be expelled from the school," the guide instructs.

And diocesan employees and volunteers must also follow suit and conduct themselves in accord with their biological sex. If they violate the policy, they will face "immediate corrective action, suspension, and possible termination" of employment or volunteer status.

Perhaps the most painful part of this agonizing document is how much Paprocki gets wrong about the best way to treat transgender persons, especially trans youth. According to a recent op-ed in The Washington Post, Tey Meadow, an expert in transgender kids, writes that there is a growing consensus that an approach of "acknowledgment, support, associated medical care" is the best way to ensure "the physical, psychological and emotional well-being of these youths."

Trans kids who do not get proper support and affirmation suffer "higher levels of depression, early substance abuse and suicidal ideation," Meadow explains, which are a direct result of "the disastrous social, psychological and bodily effects of nonacceptance."

Paprocki's guidelines are a perfect recipe for this kind of psychological harm.

In no way does Paprocki's policy draw on the opinions of science and medical experts, or the experiences of countless healthy, prospering transgender persons. His reasoning can be boiled to down to this: "Because God says so."

This binary God that Paprocki portrays is so small and so limited in the face of the extraordinary complexity and variety that God has made in every aspect of nature and throughout our universe.

Like his opinion of same-sex relations, Paprocki uses a narrow interpretation of natural law to hold transgender persons hostage to their biological sex. But he ignores a fact that he actually admits to in his policy: that there are people who are intersexual and that they are entitled to "appropriate medical care."

Intersex persons (that's the "I" in LGBTQI) are those who are born with variations in their sex characteristics genetically, hormonally or in regard to their genitalia or gonads. Though Paprocki insists that such cases are rare, recent studies suggest that one in every 1,000 people may be intersex.

If God is creating so many people with such magnificent diversity, and if all persons are a union of body and soul, why wouldn't it follow that God is being equally creative in the gender expressions and spirits of transgender persons? And why wouldn't the church allow them to receive potentially life-saving treatment that will help them thrive in the way God wants all of God's beloved children to flourish?

Rather than victimizing transgender people in his latest culture battle, Paprocki should be listening to their stories, their suffering and their faith. He might learn something about the God who created him.

[Jamie L. Manson is books editor and a longtime, award-winning columnist at the National Catholic Reporter. Follow her on Twitter: @jamielmanson.]

Editor's note: We can send you an email alert every time Jamie Manson's column, Grace on the Margins, is posted. Sign up here.