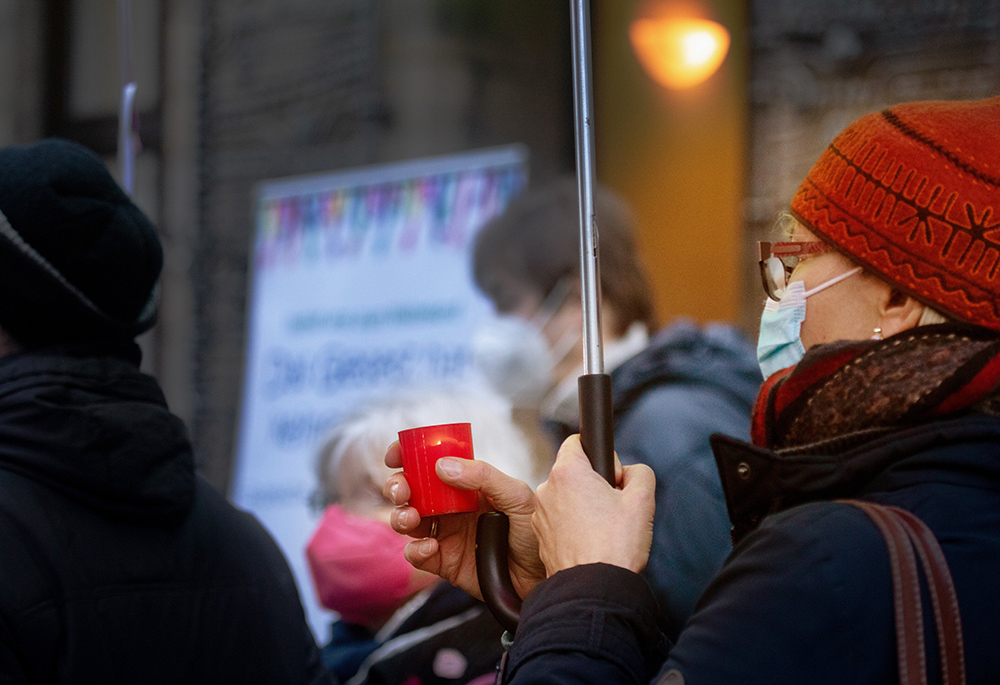 A woman holds a candle during a rally for victims of clerical sexual abuse Jan. 21 in front of the cathedral in Essen, Germany. (CNS/KNA/Andre Zelck)

As American Jesuit historian Fr. John O'Malley wrote in one of his last articles published in America magazine last February, the history of synodality is older than you think. There are different phases in the history of the synodal institution and way to govern the church: from the very early church to the medieval times to early modern Catholicism. The current phase is part of what Vatican II had in mind for church reform: a mix of aggiornamento (or updating in light of new issues) and of ressourcement (taking a fresh look at the ancient sources of the Christian tradition).

It has become evident that it is no longer an option to ignore, dismiss, belittle, or remain bystanders with regard to cases of abuse, especially in the church. Abuse of any type — sexual, spiritual, abuse of power and/or authority — blatantly contradicts the fundamental dignity of every human being. This recognition of the terror of abuse is part of a long-term process of knowing and understanding at a sociocultural and political level (public opinion, legislation, the justice system), but also at the communal level as Catholic community (which is much larger than just the number of those who after baptism participate sacramentally in the life of the church).

Most of the local and national phases of the ongoing synod process, as they have emerged from the synthesis document published by the Vatican on Oct. 27, have mentioned the abuse crisis as a key factor in shaping the perception and understanding of the church, not only by the media but also by Catholics. This connection between the need of a more synodal church and the abuse scandal has been visible also in those countries where there has not been a national investigation like the one in England and Wales (the Independent Inquiry into Child Sex Abuse, 2022), in France (the CIASE report in 2021) or in Australia (the report of the Royal Commission published in 2017).

If there is an issue on which Catholics in many countries will decide to stay or to leave, it is the reform of the church as a credible response to the abuse crisis. In this, those who characterize synodality as a spiritual and not structural conversion should look at history. (It was shocking to see that in the group of experts that gathered in Frascati to draft the October synthesis document there was not one single historian). The vast majority of Catholics who have become sensitive to the abuse crisis and now look at the future of the church do not want another, one more Catholic Church in opposition to the existing one. They do not want another Reformation splitting Catholicism in two.

They do not want a "Counter-Reformation" like the one that reacted against the Protestant reformers in the 16th century. What they want is a Catholic reform that gives new life to existing structures, is not afraid to get rid of structures that no longer have a meaningful function and surely won't in the future, and is courageous to create new ones.

It is true, as synod leaders have said many times, that the synodal process is a mature fruit of Vatican II. But this will be a failed promise — and an ominous sign of the state of the reception of Vatican II — if the synod on synodality fails to address the abuse crisis, especially in the Catholic Church, as one of the signs of our times.

To be sure, the abuse crisis is mentioned in a number of documents from national synodal processes, including in those from the U.S., Australia, Austria and France. However, the strong impression is that often the suffering of victims of abuse in the church is presented as one among other equally important issues. More importantly, the reference to "greater transparency, accountability, and co-responsibility" (as at Point 20 of the document released by the Vatican in October) does not really seem to lead to tackling the systemic issues underlying the double crisis: of abuse and of lack of trust in leadership in the church — and the consequent need for structural changes, especially in church governance and models of ministry.

An attendee prays the rosary Oct. 1, 2018, during a public session on the issue of clergy sexual abuse at Our Mother of Confidence Parish Hall in San Diego. (CNS/David Maung)

Wanting to ignore or downplay the impact of the abuse crisis can be motivated by two reasons.

On the one hand, many think that abuse has been talked about for too long and too much, and that one should finally get back to the "real" pastoral questions. This can be, depending on preference, the liberal or conservative variant of a fortress mentality. The latter leaves out the double crisis — the horror of sexual violence by clerics, religious and others in the church, and the great horror of the institutional failure of church leaders to stop the abuse — when talking, for example, about synodality and the way of the church in the present. Everything that could disturb a spiritual atmosphere of fresh start, which is urgently longed for after so many scandals, or a culture war orientation, is to be kept out.

On the other hand, some — including those leading Germany's national synodal way process — see themselves exposed to the accusation that they are using the abuse cases as a pretext for pushing through frequently made church-political demands such as the ordination of women, without having gone through a genuine spiritual discernment process.

The danger inherent in leaving the abuse scandal out of the mainstream of synodal deliberations (which is understandable from a human point of view in view of the unbearable suffering of those affected and the failure of church leadership) is great and has serious consequences. The deep disappointment, anger, resignation and alienation of many Catholics, even from the core of parishes and other church institutions, would simply be wiped aside — and would permanently lead many committed believers and their families into spiritual exile.

Moreover, the great creative potential for real spiritual and institutional renewal that would lead to a safer, more transparent and more honest church would also not be seized. The price seems too high for many, who don't recognize and admit that there are no quick and magic solutions, neither on the left nor on the right.

At the same time, in view of the many crisis-like developments also in society and in the world, it would be a necessary sign if the Catholic Church would consciously face up to the strenuous and disillusioning confrontation with its very mixed past and present. In doing so, it would be an example of how, with its own failures and potentials, a realistic and effective further development of what stood at the beginning of Christianity can take place: the selfless turning to those who most long for God's healing and salvation.

[Massimo Faggioli is a professor of historical theology at Villanova University. Jesuit Fr. Hans Zollner is director of the Institute of Anthropology at the Pontifical Gregorian University and a member of the Pontifical Commission for the Protection of Minors.]

This story appears in the Synod on Synodality feature series. View the full series.
A version of this story appeared in the Dec 9-22, 2022 print issue under the headline: The abuse crisis should be center of synodal process.