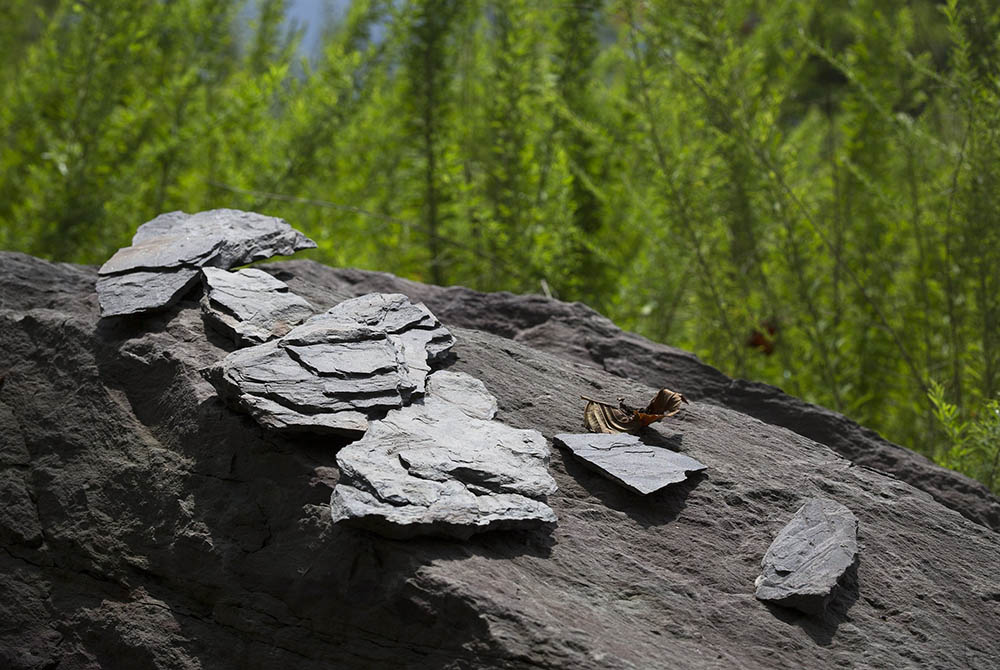 Rock near Kayford Mountain south of Charleston, West Virginia, as seen Aug. 19, 2014. The Catholic Committee of Appalachia, a membership-based organization, has served Appalachia, the poor and creation since 1970. (CNS/Tyler Orsburn)

As Inauguration Day approaches, our president-elect is quite aware that he will begin his term of office in a bitterly divided time in our history. Even as the unforgettable year of 2020 came to a close, President Donald Trump was still desperately clinging to the claim that he won an election already certified by all the states and after the ballots had been cast by the Electoral College. The divisions Joe Biden inherits are partisan, ideological, racial, economic, generational, religious, geographic, issue-based, identity-based and involve crossover in these and other categories.

A close look at the electoral maps reveals much more complexity than the mere labels of red and blue, even though the Electoral College system depends almost exclusively on the party vote of each state. Within states of either hue, there are red districts and blue districts, which largely represent the urban-rural divide of the country. This demographic division is but one characterization of our factions, which often seem to exist in separate worlds even in the midst of a pandemic with global reach.

Since the moment of his election, Joe Biden has insisted that he will be a president for all Americans, not only his fellow Democrats. While this would have traditionally been too obvious to state, it is now critical for the nation to hear. From the perspective of Catholic social teaching, one area in which the new president might begin to address the divide and promote the common good would be a genuine engagement in the issues of rural poverty. Poverty in the United States is clearly not limited to heavily concentrated urban populations. With the challenge of large distances and the relative lack of services in many rural and less populated areas of the nation, the experience of poverty can even be more desperate there.

Most of the dioceses in the United States, despite their urban centers, contain some expanses of rural America. My own Diocese of Lexington includes 40 counties of one of the historically poorest regions of the nation, Appalachia. While cultural and geographic riches abound in this part of the country, the poverty rate can be up to 41% in the region. The residents of economically impoverished rural areas see themselves quite differently than their counterparts in urban areas. They are also tired of hearing promises from candidates and elected officials who want their votes but rarely if ever deliver on their promises.

The decline of the coal industry, once a major employer in the region, as well as the loss of other manufacturing jobs resulting from free trade policies has had a major impact. As the 2015 "People's Pastoral" letter of the Catholic Committee of Appalachia states well, the most common jobs in many parts of Appalachia are minimum wage service jobs that provide little job security, insufficient income and no opportunities for workers to organize.

Unemployment and underemployment can easily result in dependency on the welfare system, along with the departure of the young from the region in search of better opportunities. Decreased populations lead to the closure of businesses, which then contributes to increased food insecurity. Cheap and unhealthy food is readily available in places of rural poverty, but grocery stores with healthy options can be few and far between.

The health care issues created by food insecurity are compounded by the mental health issues associated with joblessness and chronic poverty, too often leading to alcohol and drug addiction, which in turn increase the incidents of domestic violence, homelessness and imprisonment that are often experienced in a cyclic way.

A first step towards addressing rural poverty would require listening to people and their experiences to overcome the stereotypical images about the rural poor. Raising the minimum wage would be an immediate help to many, and securing the child tax credit for the working poor would be a significant step forward. Criminal justice reform and greater investment in prevention and rehabilitation for addictions would improve the personal and family lives of many. Restrictions on predatory lending would likewise improve the chances of people to avoid being trapped in an endless cycle of debt and dependence. The farm bill — and the Supplemental Nutrition Assistance Program, or SNAP, that is part of it — can provide real relief to the undernourished, allowing children the possibility of performing better in school and planning for better futures.

Investment in clean energy is both a strategy for creating jobs and reducing environmental destruction to our common home. The rural poor have regularly paid a higher price for the cheap energy from fossil fuels enjoyed throughout the country: illnesses like black lung disease, destruction of natural resources like water, and economic overdependence on the extractive industries have disproportionately affected poorer rural populations.

To effectively work for justice for rural people living in poverty, and for all the economically disadvantaged, we will need to relearn our basic civics lessons and promote true participatory democracy. President-elect Biden will have to work hard to restore damaged institutions and promote the kind of trust that is necessary in working for the common good. Community organizing is scarce in rural areas but much needed to promote voter education and to empower people through education and leadership development to create homegrown solutions for overcoming the obstacles of poverty. Churches could do a great service by teaching the social encyclicals, starting with Fratelli Tutti in which Pope Francis describes social friendships and virtuous politics that place human dignity and the common good as their highest goals.

Many issues will be in competition for the new president's attention. The very people who most need that attention cannot afford the lobbyists who provide the usual access to power and to the decision-makers. Joe Biden ran his campaign as a champion of the worker and the middle class. If he can also work to provide more pathways to the middle class for workers who have been excluded, it will contribute greatly to the common good and enhance the dignity of human beings.

To borrow the reference to the parable from the pope's encyclical, which reflects on the Gospel parable of the good Samaritan, a lot of the rural poor have been beaten up on the road to national prosperity. How will we and how will a new administration be neighbors to them?