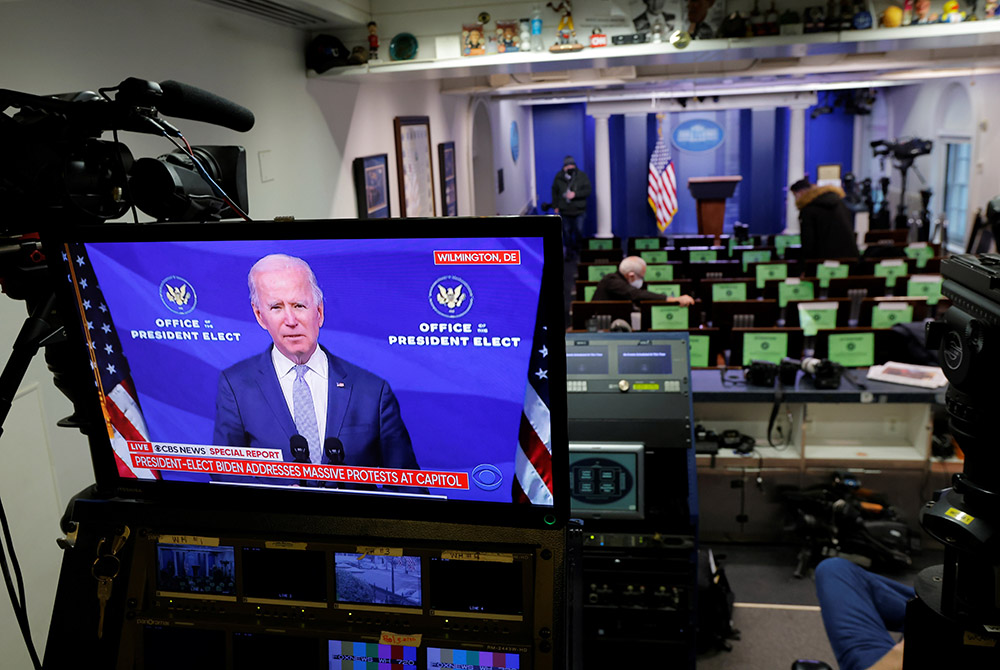 President-elect Joe Biden is seen on a monitor in the White House Briefing Room Jan. 6, making remarks regarding the supporters of President Donald Trump, who breached security barriers at the U.S. Capitol building in Washington and interrupted the certification of the 2020 presidential election results. (CNS/Carlos Barria, Reuters)

Today, Joe Biden will become president of the United States, taking office in the midst of three crises: the impeachment of his predecessor; the COVID-19 pandemic; and the economy catastrophe the pandemic has occasioned. None of these crises is easy to fix. In addition, the problem of racism, more chronic than crisis, will require sustained attention not just by our political leaders, but by our cultural leaders too. His office, and that of Vice President Kamala Harris, are the only two elected by the entire nation. He promised, both during the campaign and since, to try and unite our badly divided country, which is so necessary and also so seemingly impossible.

Since the beginning of the year, NCR has been publishing articles by Catholic politicians and activists, containing policy advice for the new president. This focus on policy is understandable because Biden will become head of government, tasked with enacting policies that further — or hinder — the common good.

Biden is also head of one of the two parties, and thus will also be expected to fulfill promises to groups that support Democrats and that expect a president of their party to deliver on their priorities.

Biden will also become head of state. The three jobs — head of government, his party and of state — are distinct but intertwined.

That is true but not exhaustive, and it applies only to the president's jobs as head of government and head of a political party.

Democracy is also a cultural ethos, a group of public and private sensibilities that a people cultivate over time in order to achieve self-governance, and it is by focusing on the role of head of state that Biden can best restore that ethos. Last July 4, I recalled E.B. White's famous reply to the Writers' War Board in 1943 when it asked for essays on the subject "What is Democracy."

We received a letter from the Writers' War Board the other day asking for a statement on "The Meaning of Democracy." It presumably is our duty to comply with such a request, and it is certainly our pleasure.

Surely the Board knows what democracy is. It is the line that forms on the right. It is the don't in don't shove. It is the hole in the stuffed shirt through which the sawdust slowly trickles; it is the dent in the high hat. Democracy is the recurrent suspicion that more than half of the people are right more than half of the time. It is the feeling of privacy in the voting booths, the feeling of communion in the libraries, the feeling of vitality everywhere. Democracy is a letter to the editor. Democracy is the score at the beginning of the ninth. It is an idea which hasn't been disproved yet, a song the words of which have not gone bad. It's the mustard on the hot dog and the cream in the rationed coffee. Democracy is a request from a War Board, in the middle of a morning in the middle of a war, wanting to know what democracy is.

President Biden and Vice President Harris must help the country recover some of the sensibilities White articulated so powerfully if they hope to redeem their promise to try and unite the country.

Biden replaces a man who had no grasp of the value of democracy and, consequently, no ability to employ the powerful symbolic power of the job in ways that fulfilled his responsibility as head of state. Biden needs to fill the void that Trump left the past four years.

Trump was incapable of speaking for all Americans in large part because he had no interest in doing so. Previous presidents have responded to national tragedies as head of state — Ronald Reagan after the space shuttle Challenger disaster, Bill Clinton after the Oklahoma City bombing, George W. Bush visiting a mosque in the days after the terrorist attacks of Sept. 11, 2001, Barack Obama after the slaughter of children in Newtown — and they reaped a political reward that Trump never could achieve.

The COVID-19 crisis allows Biden to demonstrate his finest human quality, empathy, and he began that work last night, with a memorial service on the National Mall, with other cities nationwide joining the commemoration. It was the kind of thing a head of state does. It is something we have been missing since the pandemic began, a political leader who focuses our grief and anxiety, gives voice to it, and starts the healing from of the national trauma.

Confronting the pandemic itself in the weeks ahead — fixing the problems with the distribution of the vaccine, helping and honoring those in our nation's hospitals and nursing homes who are on the frontlines, providing financial assistance to the cities and counties that face huge budget deficits on account of the virus — also lends itself to unifying policy: The virus is nonpartisan.

All presidents are commander-in-chief of the armed forces, but Trump's fascination with the military went no further than parades. He was to America what Tsar Peter III was to Russia, a boy pretending to be a man, temporarily vested with the power to use real soldiers instead of toy ones to amuse himself.

Biden did not serve in the military, but his focus on helping military families, a focus he has shared with his wife Jill, has made him conversant with that subculture. We do not have to worry about him declining to go to an American military cemetery abroad because it is filled with "losers" as Trump did. There are no "losers" buried at Normandy or at Anzio or at Luxembourg, nor are there Democrats or Republicans, only Americans and American heroes one and all.

Biden's eight years as vice president and many years as a member of the Senate Foreign Relations Committee make him comfortable representing the country abroad. It is important he focus on the crises facing the country first, but by the late spring, visits to our allies will do much to incarnate the symbolism of being a head of state.

Watching a president stand at attention while a French or British military band plays "The Star-Spangled Banner" in front of Buckingham or Élysée Palace, we all know in our bones that the honors associated with a state visit are not for the Democratic or the Republican Party but for the country. The scene embodies the return to normalcy most Americans crave.

Democracy is, finally, a willingness to lose, to recognize you will not always be on the winning side of the "suspicion that more than half of the people are right more than half of the time." Biden, who lost his first two bids for the presidency, knows something about losing an election and about the resilience required to achieve reform in a democracy.

The empathy Biden displays so easily and effectively was not won easily. It never is. It was earned in the face of grievous losses in his personal life. The whole nation should feel some comfort finally having a president who is not afraid to comfort those who have lost a loved one to COVID-19.

What a fascinating irony of history that Trump — for whom there was no greater shame than losing, should become, because of his own psychological pathologies, pathologies that would make Lear blush — would become before the whole world and the historical record for all time, the sorest of sore losers in American history.

In his first 100 days, then, Biden should avoid all, or at least most, of the highly divisive culture war issues that some in the party he leads demand he address. He has no role in the president's impeachment and should speak only to the value of holding people accountable if they violate democratic norms. In helping rebuild the economy, he should focus on policies that have overwhelming support from the American people and that flesh out the common good. In confronting the virus itself, he has the ability to bring expertise, bureaucracy and political will together in a way that will finally expose the moral vacuity of libertarian, anti-government populism. And, most importantly, by acting as our head of state with dignity, he can truly begin uniting the country, healing the wounds left by his predecessor.