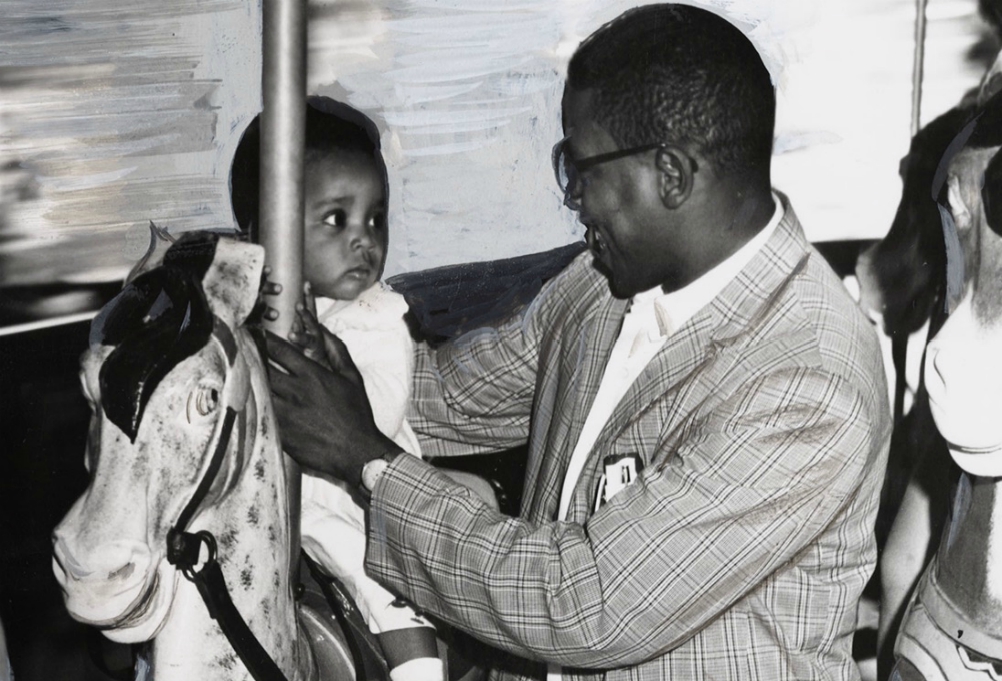 The Baltimore Sun photo of 11-month-old Sharon Langley and her father on the carousel at Gwynn Oak Amusement Park on Aug. 28, 1963, in Baltimore. (©Hearst Communications, Inc.)

The cover of the large picture book has a sepia quality, with a little girl waving from a carousel horse. I sense a time long ago and, indeed, that is what the book is about.

This little girl is black and that is important because she represents the author on a historic day in Baltimore. On Aug. 28, 1963, 11-month-old Sharon Langley became the first African American child to ride the carousel at Gwynn Oak Amusement Park on the day it was integrated. That day represented the end of an eight-year effort to desegregate the park. It was for many a great day.

I was there that day, too. Like Sharon, I was taken by a parent, but my experience was quite different. Sharon's first day at the park turned out to be my last. I was 8 and my mother took me not for the rides, but for the excitement. I watched as a long line of mostly black people marched through the doors, never to be kept out again. As we walked back to the car later, my mother said, "Well, you'll never go there again."

And she was right. I was never taken again nor was any child I knew. A large part of white Baltimore abandoned the park. Sharing the park was unthinkable to a great many people in 1963 Baltimore.

Langley now lives in Los Angeles. Unlike me, she was too young to remember that August day but it has always been a part of her life's story, recounted by her parents and captured forever in The Baltimore Sun photo showing a slightly apprehensive-looking baby in a dress with a lace collar and a tiny cardigan being held on the horse by her father. 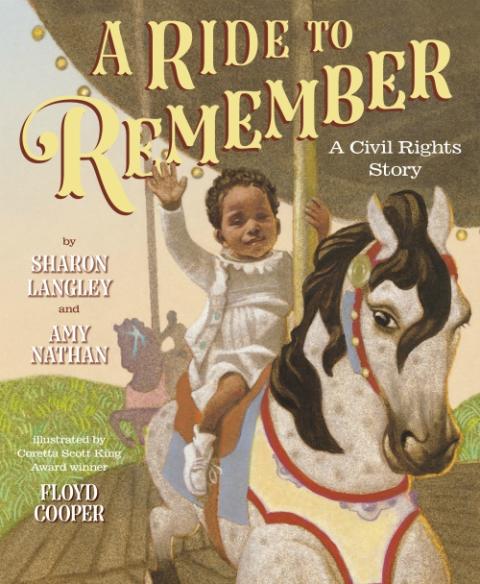 Now, 56 years later, Langley has recreated that experience in a children's book. A Ride to Remember: A Civil Rights Story is beautifully drawn by Floyd Cooper, a Coretta Scott King Book Award-winning illustrator, and co-written with Amy Nathan, whose 2011 book Round and Round Together tells the story of Gwynn Oak's integration in the context of the times.

I've never met Langley in person, but in the last few years I feel I've come to know her. After I wrote an op-ed for The Baltimore Sun in 2015 about my experience of the park's integration, I received many emails from people in Baltimore who fondly recalled their days at Gwynn Oak or their pain at being excluded.

One man told me a baby named Sharon Langley had been the first black child to ride the carousel. A few days later, I received a Facebook friend request from Langley and, recognizing her name from his email, quickly accepted. Our postings since then show we have a great deal in common in terms of our feelings toward politics, spirituality and the arts.

After reading her book, I asked to interview her about it and to discuss the day our paths crossed with such different results. That day had been recounted to her as triumphant. I didn't need anyone to recount it for me. The images are strongly burned into my memory — a street lined on either side mostly by white people and policemen, a long wait and then a procession of mostly black people approaching, more black people than I had ever seen. The tension was palpable. I felt small and afraid of what was going to happen. Fortunately, the integration was peaceful but it wasn't until I was an adult that I understood the significance of that day.

Langley's voice is warm when she calls me one Saturday evening in late autumn and once again it surprises me that we don't actually know each other. I tell her I love how she has told her story and that the illustrations are so lovely that I have the book on my coffee table. She says she cried when she opened the box from her publisher and saw it. 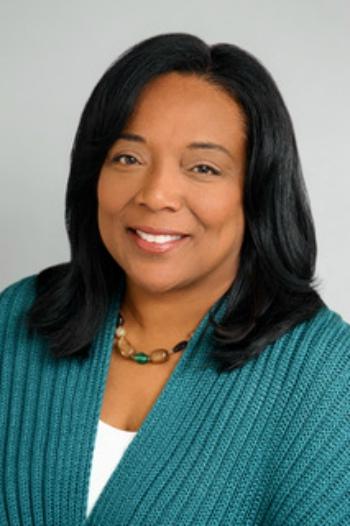 "I was a little concerned that people would think it was such a long time ago but it's still important because of the times we live in now, especially with things that affect children," she said. "There are still things we can do. We can still care. You need the corrective history. You need to know."

Langley's parents, who are deceased, had been planning to go to the March on Washington for Jobs and Freedom, where the Rev. Martin Luther King Jr. would deliver his "I Have a Dream" speech, but they couldn't find a babysitter. Instead, knowing Gwynn Oak was opening to all that same day, they dressed their only child for the occasion and walked into history.

"I knew about my mom's activism," Langley said, explaining that she had been brought up on stories of how her mother as a high schooler in the 1950s helped end segregation in her small town in Kentucky. "My thinking was that this is something we do. Even though I was very little, they could have chosen not to take me. They were making a statement. They were making a statement to me. We can make a difference. One family can."

She hopes her book will show this, written as it is from the eyes of a young black child asking her parents why black children had been kept out of the park. The parents explain segregation and the civil rights movement in a way the child can understand. Langley wants children to know that they too can make a difference.

Nathan approached Langley about co-writing a children's book nearly four years ago. Langley felt her experience as an educator — she was an elementary school teacher for 10 years — would shape the book to make a strong impact on children. She had taught her pupils about segregation and social change and knew how to frame the subjects in terms of unkindness versus kindness.

"Even young children understand the idea of hurting people, of feeling left out, and that there were other groups who felt it was wrong and were motivated to make change."

This was the case at Gwynn Oak where quiet yearly protests began in 1955. These protests gained steam before coming to a head in the summer of 1963. The Fourth of July brought the largest crowd yet to the park northwest of Baltimore City, just across the county line. Hundreds of protesters were arrested, including black and white priests, rabbis and ministers from up and down the East Coast. It was the first civil rights protest for one young white man. Sadly, there would not be many more. Michael Schwerner would be murdered by the Ku Klux Klan the following year, along with Andrew Goodman and James Chaney, during Freedom Summer in Mississippi.

Gwynn Oak closed in 1972 after being heavily damaged by Hurricane Agnes. The concessionaire for the Smithsonian Museum bought the carousel and moved it in 1981 to the National Mall in Washington, D.C. where it stands today, welcoming all children. A historical marker on the gate surrounding it commemorates its civil rights history.

And on one of the horses, called the Freedom Rider, the names of civil rights heroes are inscribed, including the name of young Sharon Langley on a brass plate on its saddle and on one horseshoe. That little girl's experience is now a ride to remember.

When Langley knows friends are going to the nation's capital, she tells them to stop by to see the carousel and they send her selfies in front of the marker and on the horse. Langley and I agree it's a shame her parents didn't live to see this memorial.

"If you look back, Gwynn Oak was not like Disneyland," Langley said. "It was a small mom-and-pop amusement park." But it's now part of history, a history we share.

I asked Langley what she thought when she read my op-ed about my considerably different experience of that day in 1963. Her response surprised and intrigued me.

"Don't laugh," she said, pausing before saying, "I actually think we should do a two-woman show about two sides of the same coin."

It's nice to think that if we do this, we will not just be in the same place at the same time again, but we will finally be together.

[Retta Blaney is an eight-time award-winning journalist and author of Working on the Inside: The Spiritual Life Through the Eyes of Actors.]