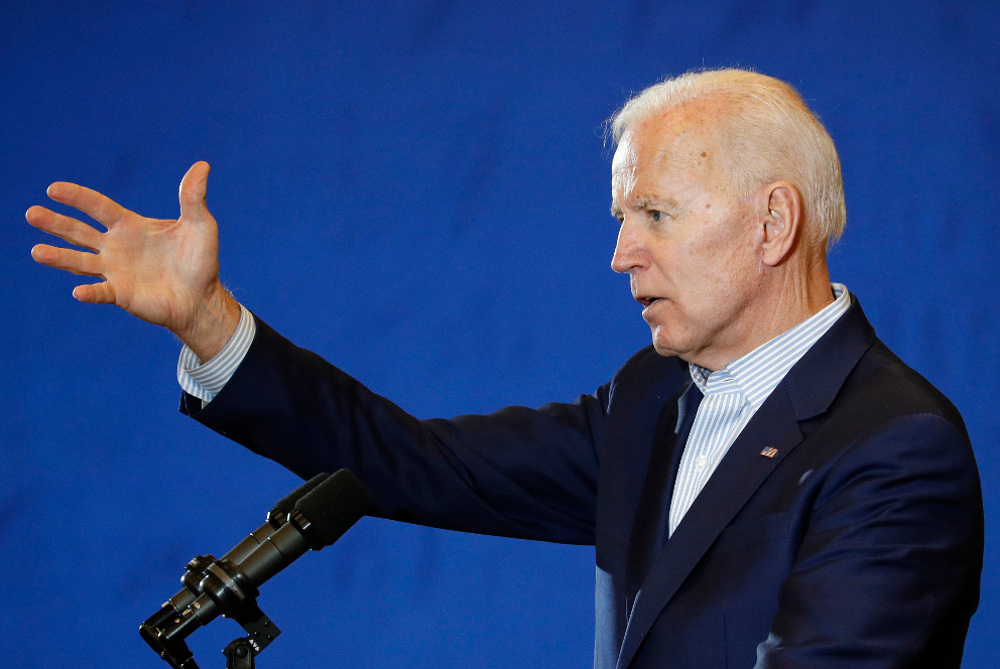 Former vice president and Democratic presidential candidate Joe Biden speaks at a rally with members of a painters and construction union on May 7 in Henderson, Nevada (AP/John Locher)

When Joe Biden entered the presidential race, he instantly became the Democratic front-runner. He also faced legitimate questions about his age, physical contact with women and a record on racial and criminal-justice issues out of step with a party moving to the left.

In 2016, Donald Trump's victories in states traditionally won by Democratic presidential candidates — Wisconsin, Michigan and Pennsylvania — were powered in large part by white Catholics. Nearly 60 percent of white Catholics supported Trump nationally, a higher percentage than any other GOP presidential contender in the past 20 years. But Catholics are up for grabs in 2020.

Divided between the two parties — white and Latino Catholics are nearly evenly split — and heavily represented in battleground states, Catholics are a coveted demographic in any election year. Barack Obama won the overall Catholic voters in 2008 and again, narrowly, in 2012. Trump reversed that, winning 52 percent in 2016, compared with Hillary Clinton's 45 percent, according to Pew Research analysis of exit polls.

Clinton missed an opportunity to make a strong case to white Catholics. She never campaigned in Wisconsin during the general election. When Clinton was invited to speak at a St. Patrick's Day event at the University of Notre Dame, a touchstone of Catholicism, her Brooklyn-based campaign team declined, confident in its sophisticated data projections that white Catholics were not the audience Clinton needed to reach.

It's hard to imagine Biden similarly brushing off white Catholics at a time when two iconic institutions in their lives — the church and the factory — have been brought low by very different forces. His emphasis on the dignity of work and support for unions are both themes that have been pillars of Catholic social teaching dating back centuries. Catholics who remember the church and labor as allies in the fight for living wages and economic security are natural Biden constituents.

"I am a union man, period," Biden told the crowd during his first campaign speech at a Teamsters hall in Pittsburgh. Touting a $15 minimum wage and promising to end Trump's tax cuts that benefit the wealthiest few, he pledged to "reward work in this country, not just wealth."

Biden's "Amtrak Joe" reputation as a politician comfortable in diners, bowling alleys and union halls is well known, even as that Everyman image sometimes verges on unhelpful caricature.

Politics can't be reduced to optics or cultural signaling. Biden's record and rhetoric will and should be tested. His support for free-trade deals such as the North American Free Trade Agreement and the Trans-Pacific Partnership are provoking strong challenges from Vermont Sen. Bernie Sanders. Other progressive Democratic nominees are also reminding voters that he backed 2005 legislation that made it harder for consumers to get protection under bankruptcy.

And despite promising in Pittsburgh to be "all-inclusive, opening the doors to opportunity for all Americans no matter their race, their gender, who they love," his Everyman shtick may read to some as overwhelmingly white and male. An endorsement from the International Association of Fire Fighters doesn't go far with younger, more diverse workers in service sector unions. 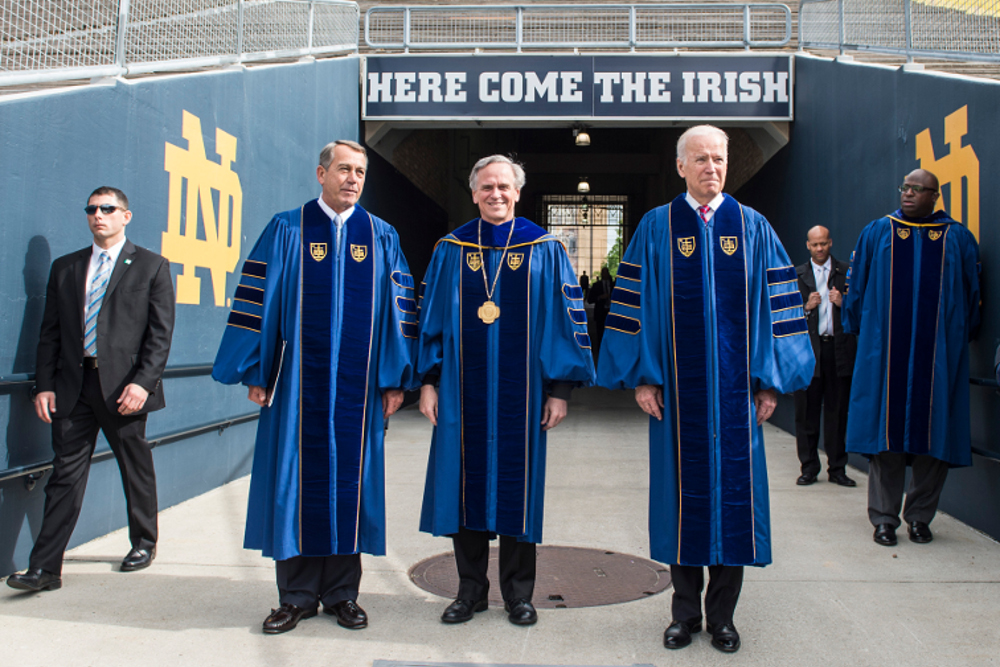 "Everybody's concerned with the families being torn apart and the children not being with their maternal parents and being displaced," one man said. "You know, to take a child a way from a mother or father whoever and put them somewhere where they're isolated away from their parents. That's just cruelty," another said. One voter described family separation as a form of "kidnapping." A Pew research survey in January found Trump's support among white Catholics has dropped to 44 percent, a slide from 55 percent last spring.

A backlash against his extreme immigration policies should make the president nervous. Conservative Catholics don't need to flip and vote for a Democratic candidate in 2020 to derail Trump from replicating a narrow electoral win that runs through Michigan and other Rust Belt states. If conflicted voters stay home, find another Republican to support or turn out in smaller numbers for the president, Trump is in trouble.

Data from the 2018 midterm election analyzed by Ronald Brownstein of CNN shows that Trump's favorability among white working-class voters who are not evangelicals — think white Catholics in Biden's hometown of Scranton, Pennsylvania — has already fallen. 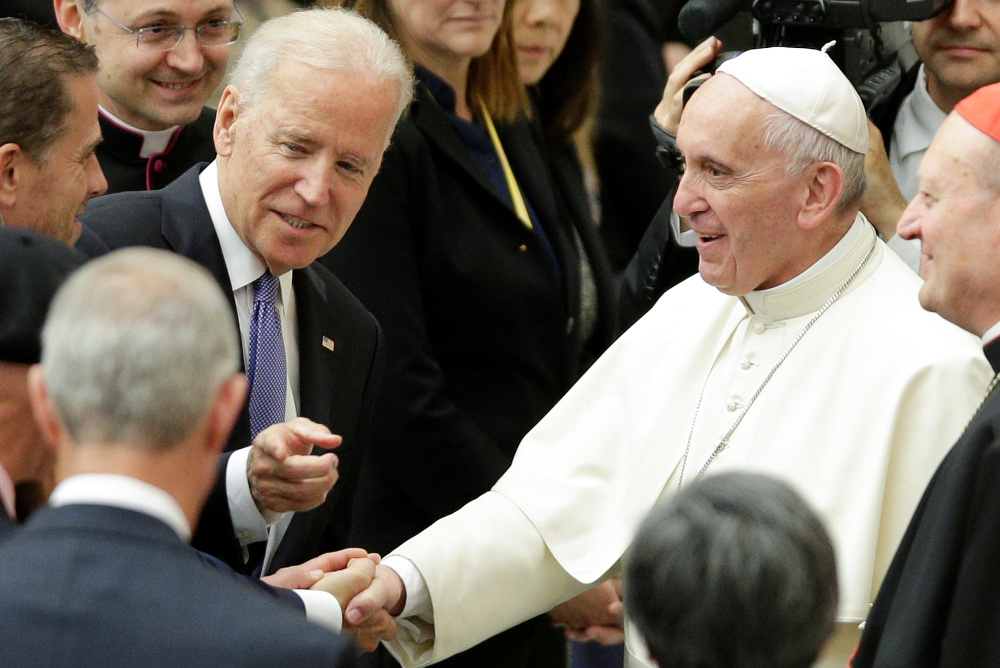 Catholic women will be a critical part of this demographic. Democrats, the analysis found, "ran particularly well this year among white working-class women who are not evangelicals, a group that also displayed substantial disenchantment in the exit poll with Trump's performance," Brownstein wrote. "Those women could be a key constituency for Democrats in 2020 in pivotal Rust Belt states such as Michigan, Wisconsin and Pennsylvania, where relatively fewer blue-collar whites are also evangelical Christians."

Right now a fired-up base of progressives is setting the tone in the Democratic primary, making Biden, with his baggage of Anita Hill's treatment during Clarence Thomas' Supreme Court hearings, a cozy relationship with the banking industry and his record of opposing busing to desegregate schools, a very tough sell.

But don't sell him short. If Biden can emerge from the necessary challenges on his left to articulate a compelling vision for an inclusive America, one that honors the dignity of work and affirms the vital immigrant character of our nation, Catholic voters could punch his ticket back to the White House as the first Catholic president since JFK.