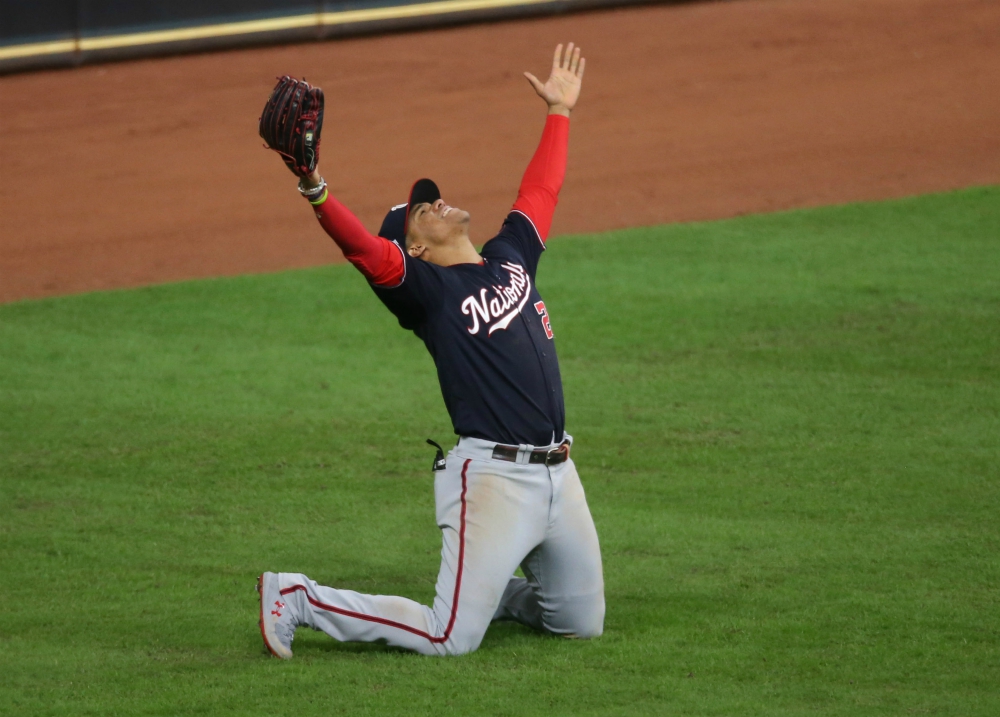 Washington Nationals left fielder Juan Soto celebrates after the team defeated the Houston Astros 6-2 in Game 7 of the 2019 World Series at Minute Maid Park in Houston. (CNS/USA TODAY Sports via Reuters/Thomas B. Shea)

OK, America, let's stop talking smack about Washington, D.C., whether you damn it as a quid pro quo swamp or a hideout for whistleblowers. Thanks to the potent sluggers and smoke ball pitchers on the Washington Nationals baseball team, D.C. is not the District of Columbia, but now the District of Champions.

As the winners of the recent World Series — or the World Serious, to recall sportswriter Ring Lardner's apt phrase — the Nationals were the unlikeliest team to even get to the October playoffs. Early in the 162-game season, its bumbling record was 19 wins and 31 losses: the sorriest start of a team to go all the way to the crown and the only one ever to win the needed four out of seven games on the other team's field.

In the Nationals wild season, it was fitting the team made it to the playoffs with a wild card entry in a one-game playoff against the Milwaukee Brewers in which it was trailing in the eighth inning — as it would trail again later in game five of the division series. It was only after defeating two teams with far better records — the Los Angeles Dodgers and St. Louis Cardinals — that the Nationals would face the Houston Astros who led three games to two and needed to win only one of the next two to win the series.

And a slender thread it was, what with the next two games to be played in Houston.

Back in D.C., fans took to wearing T-shirts emblazoned with "Stay in the Fight" — the boys did by taking Game 6 — and "Finish the Fight," which the team did by winning Game 7. With the fans dancing in the aisles, the Nationals players took to dancing in the dugout after each home run hitter finished prancing around the bases. The fanciest stepper was Juan Soto, a boyish 21-year-old from the baseball-crazy Dominican Republic and who became the youngest player ever to blast three home runs in one World Series.

The exuberance of the ballplayers was shared by the tens of thousands of delirious fans who lined the streets of the capital to cheer the long-shot team waving and riding atop buses that carried them to a Saturday afternoon rally a line drive away from Capitol Hill.

If nothing else, the victory came at a time when the city desperately needed a distraction from its festering woes. The year 2018 saw a record number of hate crimes, with the toll in 2019 expected to soar higher. In the District's public high schools, the graduation rate is a dismal 65 percent, prompting the mayor to moan there's "more work to do."

The majority of the D.C. Council is pushing one of its members — Jack Evans — to resign over allegations of ethics violations in using his office to enrich himself from questionable deals.

Then there's the unavoidable presence of President Donald Trump, the bigoted, woman-groping, immigrant-loathing serial liar who hatefully smears his opponents as "human scum." In the District of Columbia, the self-acclaimed genius won a piddling 4% of the presidential popular vote in 2016, the lowest share ever of any Republican candidate. When Trump showed up at National Park for Game 5, hours after braggingly hailing the slaying of Abu Bakr al-Baghdadi, the home crowd greeted him with raucous boos and catcalls topped off with chants of "Lock him up." Apparently, Trump's base wasn't in the stands that night.

A fair number of the loyalists would be among the 1,000-plus on the south lawn of the White House on Nov. 4 when the preening president took to the lectern to align himself with the team and boast that the size was a record for such events. It would have been larger had several players — mostly minorities — deliberately stayed away.

No absentee was as articulate as Sean Doolittle, 33, a relief pitcher who performed well in the playoffs. In a detailed and thoughtful interview with The Washington Post, he explained his contempt for Trump and his tawdry ways: "There's a lot of things, policies that I disagree with, but at the end of the day, it has more to do with the divisive rhetoric and the enabling of conspiracy theories and widening the divide in this country. My wife and I stand for inclusion and acceptance, and we've done work with refugees, people that come here from, you know, the 'shithole countries' " — a reference to Trump's vulgar January 2018 slam against poor nations in Africa and Latin America.

My ties to baseball go back to being a high school first baseman and in college forming a friendship with Eddie Stanky, the Brooklyn Dodger great who befriended Jackie Robinson as a teammate while others remained mute and distant. Two of my three boys, John and Edward, played Division 1 baseball and both now are coaches who run thriving summer baseball camps for girls and boys 4-14 years old. Across the street from my home in Washington, is Friendship "Turtle" Park with four kempt fields.

As joyful as I am right now about the Nationals' success, I've been only once to Nationals Park. But I've been to hundreds of games, maybe thousands, a minute from my front door, there to relish the sight and sounds nowhere else to be savored.

[Colman McCarthy, director of the Center for Teaching Peace, is the author of Baseball Forever.]