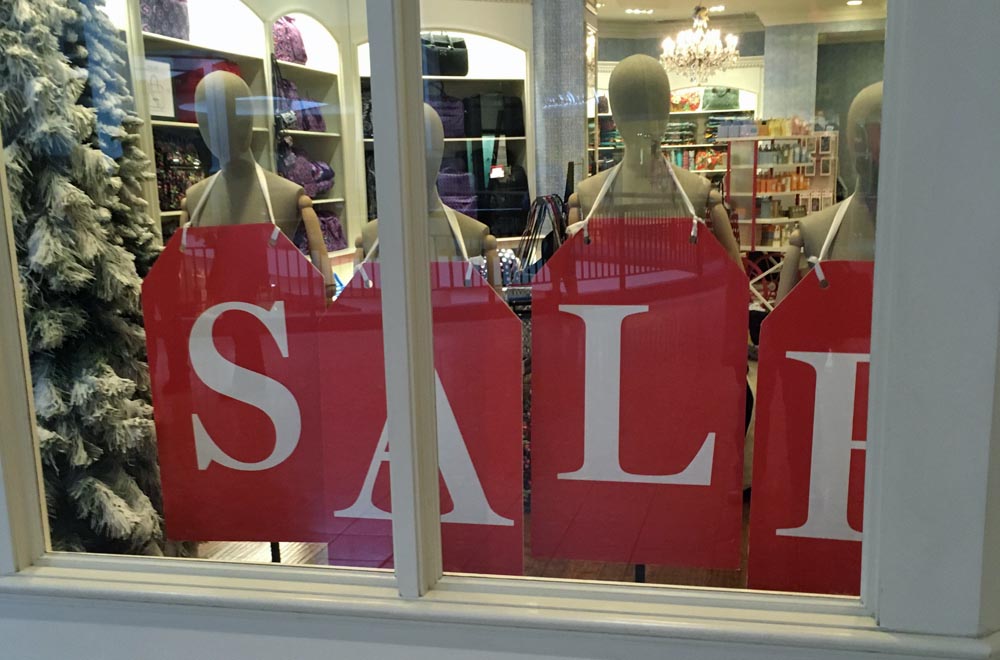 One of the storefronts the author noticed (Provided photo)

A blog has leeway. This one takes me on a journey from standing at the border wall with Mexico in Nogales, Arizona, to the biggest mall with the most expensive shops in St. Louis. To start near the end, I was at the Apple Store at the Galleria in St. Louis because my computer hard drive had stopped spinning in its tracks while downloading an upgrade. (Now there's a syntactical opportunity for meditation, but I digress.)

The hard drive had to be replaced and I had to download all my saved documents — including the password to my home modem. I said to my neighbor, "I have a favor to ask but it is personal and may be intrusive." "No, no," he said, giving me the password to his Wi-Fi. For days and nights I've been receiving thousands of documents from the cloud. The photos are stuck and I still can't find the passwords because I lost my Microsoft Office, and I can't get it replaced until after Thanksgiving. (I wrote this blog via email.)

My plight is stomach-turning because I have a lot to lose: my writing since 2002, photos, the time it has taken so far to rebuild my computer, money spent, plus whatever lies ahead in the purgatory of processing artificial intelligence. So this is where I've ended. Did I learn anything from standing at the wall in Nogales?

Back in 1994, President Clinton stood at the Brandenburg Gate in Berlin and said, "We stand together where Europe's heart was cut in half and we celebrate unity." As he spoke, the wall in Nogales was being erected. It's more than 20 years since the U.S. policy of "Prevention through Deterrence" was expounded, driving people into the desert — at high risk of death — to deter immigration, even while doing little to prevent human and drug trafficking by the cartels.

As I wrote a couple of weeks ago, I direct my anger, the knots in my stomach, my anxiety and expenditure of effort — even my humor — better on my own experiences than on the sufferings and joys of others. I'm human. My attention drifts back to myself.

But I can catch myself in the moment and remember that others are suffering. I can remember standing at that wall.

While I was waiting for my appointment at the Apple Store, I saw sign after sign advertising deep discounts in the merchandise in the Galleria Mall. The shop signs read "Sweaters $12"; "Holiday Deals 50%"; and "Buy and Save 40%." This was a full week before Black Friday. $70 off tuxes. For years, I have refused to shop on Black Friday, a small resistance to consumerism. But these deals, offered a week in advance, took me aback and made me ponder our culture.

It is miserable to lose all your computer data. It's miserable to miss a good sale or not have enough money to make a purchase. It is probably miserable to have to offer deals that lose money in the hope you can make do with the business you get.

We all have bad luck and miserable moments. But those reading this column probably don't live in misery. We can offer up our bad moments in a prayer, asking God to spur us on to take steps to ease the suffering people in misery. We can pray to not be suffocated in our own culture of so many things.

Christmas is an amazing holiday because it leads us on to these bigger thoughts about what is important in life, not just our own lives. Merry Christmas. May we all be more generous.