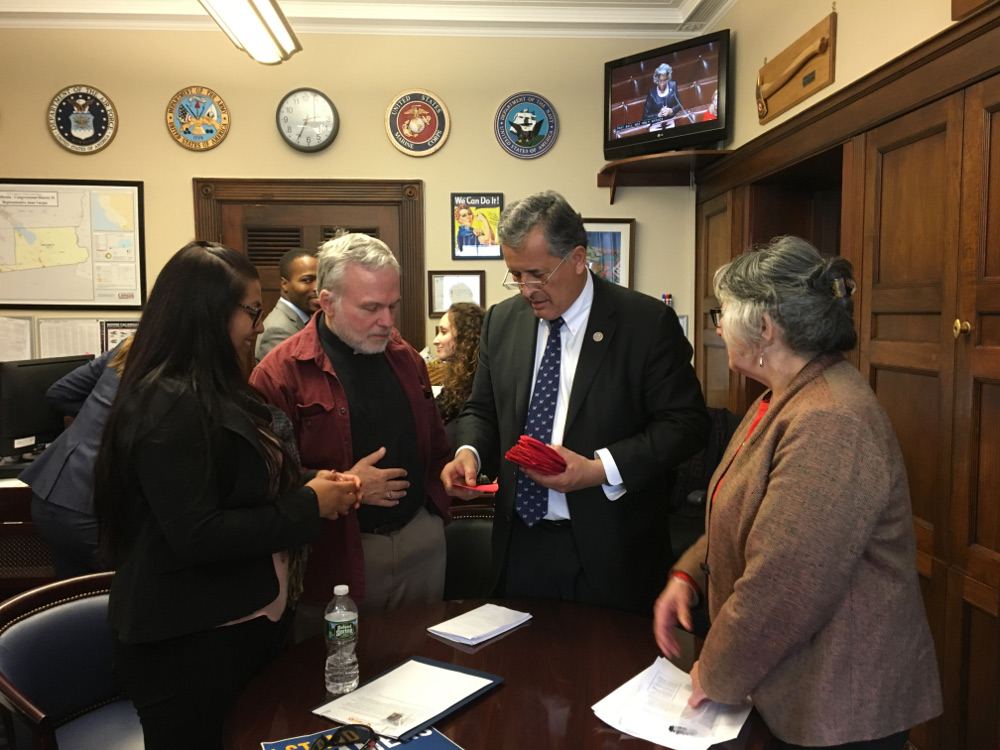 Rep. Juan Vargas (D-California), second from right, reads a valentine for President Donald Trump during the Catholic Day of Action for Dreamers event at the Capitol Feb. 27. The Valentines were presented by, from left, Kattia Ortiz, a 25-year-old Dreamer from Mexico, Jesuit Fr. N. José "Pepe" Wilkinson, pastor of Our Lady of Guadalupe in San Diego, and Marta Flores, who leads spiritual direction at the parish. Parishioners of Our Lady of Guadalupe created more than 1,000 Valentines for Trump. (NCR/Julie Bourbon)

Columnist Fr. Thomas Reese was arrested yesterday (as were several religious women) as part of a Catholic protest to bring attention to the plight of Dreamers. The Catholic Day of Action for Dreamers event was covered by NCR contributor Julie Bourbon. Reese explained his plans to get arrested in a column the day before.

Our Vatican correspondent, Joshua J. McElwee, is reporting on the just-ended Council of Cardinals meeting in Rome, where the group advised Pope Francis on how to speed up investigations of clergy sexual abuse. One suggestion is regional tribunals.

Today Cardinal Blase Cupich of Chicago will address gun violence at his state's capitol, where two gun control bills are being considered. (I will be reporting on Cupich's talk later this morning.) The Archdiocese of Chicago also just hired a former FBI agent for a new position of Director of Violence Prevention. Phillip Andrew was himself a victim of one of the first school shootings 30 years ago.

Catholic Social Teaching — with its principles of human life and dignity, solidarity, subsidiarity, charity — has much to inform today's gun violence debate, says columnist Michael Sean Winters. ICYMI: Catholic students were part of walkouts in the wake of the Florida shooting, and more than a dozen Catholic colleges and universities have said publicly that peaceful protests by high school students will not adversely affect admission to their schools.

Our Field Hospital parish round-up includes an update on sexual abuse background checks in Newark, New Jersey, Lenten fish fries in the Midwest and preaching on racism in St. Louis.

I was lucky to meet and briefly work with Phyllis Tickle, the religion editor at Publishers Weekly and a spiritual author in her own right, who died in 2015. Now Jon Sweeney's biography of Tickle is out, and columnist Janna Reiss says it has some surprises about Tickle's life.

The stories we tell little girls matter, says Amy Morris-Young, who makes some additions to "happily ever after" to boost her granddaughters' self-image and self-esteem.

Columnist Mariam Williams defends being a "black power-driven woman," with some help from the author of A Black Nun Looks at Black Power.

In the latest edition of GSR's "The Life," religious women discuss the most difficult adjustment they had to make in religious life.

A couple week's ago I mentioned a favorite podcast, The Francis Effect with Franciscan Fr. Dan Horan and David Dault. This week they invited me to be a guest, and we talk Catholic journalism, and — in a bonus section — about theologian St. Joseph Sr. Elizabeth Johnson.