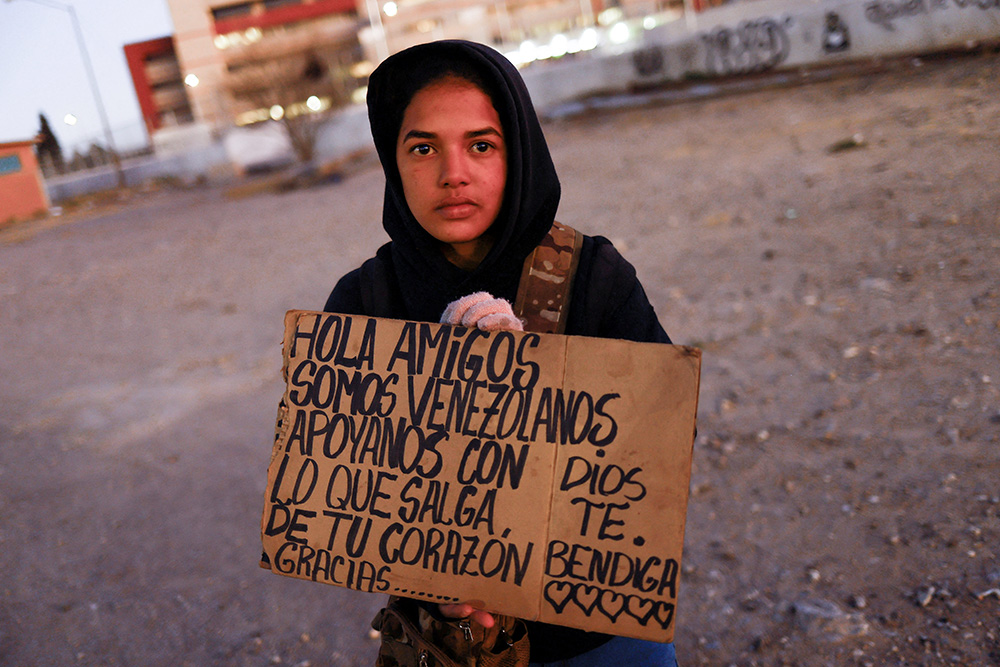 Yalimar Chirinos, a 19-year-old migrant from Venezuela, displays a sign near the U.S.-Mexico border in Ciudad Juárez, Mexico, Jan. 7. The sign reads, "Hello friends, we are from Venezuela, support us with what comes out from your heart. Thank you. God bless you." (OSV News/Reuters/Jose Luis Gonzalez)

One night this Advent, I found myself driving across the city while the decorating went on, wondering if Christmas would soon be seen as another kind of secular holiday. Only a few houses, for instance, had any kind of reference to the birth in Bethlehem on display.

In fact, I wondered, do most people actually know anymore why we keep this holiday at all? For economic reasons? For the sake of the GDP? As a civic get together? As a declaration designed to allow us to claim our national unity, at least, whatever our ethnic mixture of bona fide Americans?

One thing for sure, as I went from place to place, Santa Claus was there and a lot of candy canes, yes. Jesus, Mary and Joseph, not so much. And nowhere, in any store, did any clerk answer my "Merry Christmas" at all.

The situation is clear: No crèche on the grounds. No pictures of it on the ads and posters. Few even on the "Christmas cards."

Something was happening to us. But what? And are we conscious of the implications of it all?

Although some part of Christmas seems to be dying out, subdued, more serious than past seasons of it, I found myself wondering if we were in the process of reclaiming a different kind of Christmas, rather than losing it. In fact, I thought, maybe we have never ever been so close to the point of it all before. Whether we realized that now or not.

The truth is that two millennia after the birth of Jesus, COVID-19 and the social upheaval of recent years have tumbled our whole society. Change has become our brand, and we are beginning to see the world, its needs, its races, its desires differently.

And so Christmas was changing, too. Even the way we dealt with Christmas liturgies and parties and family customs seemed strangely missing or at least limited. There were smaller parties, less caroling, fewer ads even. Less enthusiasm, maybe. Too much falderal, perhaps. Even the music had changed from our traditional Christmas hymns to a kind of universal brand of Christmas hope for peace and love everywhere.

So what are we to think? Is tradition as we have known it over? Is everything we were taught to do as part of the feast gone now? Old-fashioned now? Was it all for nothing? Can something as basic as Christmas simply disappear? The notion chills.

But hold it. Think again.

Think of the mix of languages on our streets. Think of the coat drives and the shelters that have opened. Think of the toys that were painted and fixed for children we have never even seen.

This may, in fact, be the very time we have been looking for, singing about, all our lives. A time when the differences between people broke down and like the lion and the lamb, the rich and poor, the natives and the foreigners began to lie down together.

Think of the crowds on the sands of the Rio Grande in El Paso, Texas, waiting for food, hoping for help, carrying children they do not know.

And then listen carefully to hear the voice of angels again announcing to the world that something new is being born here — on this earth — also. And now. Samplings of the whole globe are rising up among us.

The world itself begins to look different.

Maybe this is the place and the tree and the star and the human beings everywhere that we ought to be thinking about now in very different ways. Just at it happened at first — a sign and symbol to us of what we are meant to be about in life now. Especially now.

We may, in fact, be becoming a real model of "Peace on Earth, goodwill to all."

Or maybe, better yet, listen for the sound of ice cracking on a cold and dark globe as the flow of immigration binds us all more and more together.

Maybe this is the moment when there are so many coming from so many places that all the ethnic centers of the world will find themselves — in an overflow of differences — coming together.

From where I stand, following a star, trimming trees, sharing the gold, the frankincense and the myrrh among us are what Christmas is really all about.

And while it may look very different from the traditional Christmases of my youth, or the great religious feasts still observed in the monastery, this is, in fact, the admixture of the human family now. And it proves there is more than enough room in the inn. Provided that we realize that the birth of Jesus depends on us.

So now for a hearty chorus of "Hark the Herald Angels sing" — every feria day from now on till we get everyone settled again.