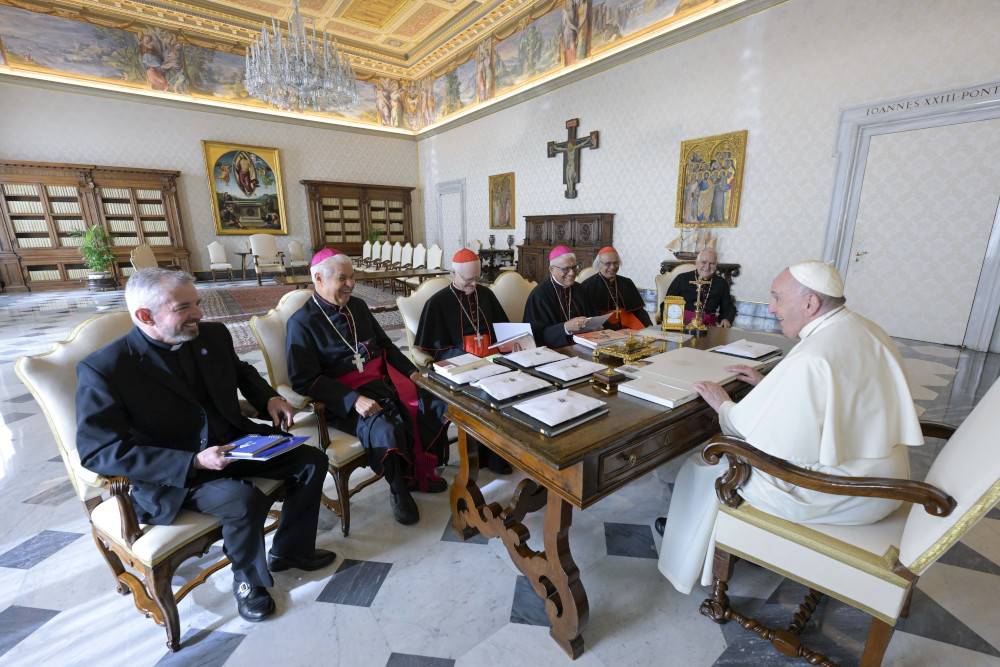 The English text of the final document from the first Ecclesial Assembly for Latin America and the Caribbean has been released. This November 2021 meeting, convoked by CELAM, the continent-wide episcopal conference for Latin America and the Caribbean, was called an "ecclesial assembly" rather than a "synod" because it did not exclusively include bishops. That said, it placed itself in the direct lineage of CELAM meetings starting in Rio de Janeiro in 1955, through Medellin in 1968, Puebla in 1979, Santo Domingo in 1992 and Aparecida in 2007. For those unfamiliar with that history, the new text provides a useful historical account of the trajectory from Rio de Janeiro up to today.

Americans who have invested in the universal synodal process would do well to consult this document, not least because the synodal process was inspired by Pope Francis' experience of CELAM meetings, but also because the document shows how differently the challenges facing the church appear to those Catholics in the Global South.

For example, when the document surveys the signs of the times, and looks at the socioeconomic sphere, the differences between their experience and ours in the U.S. is glaring.

For all the economic challenges we faced in the United States, we encountered nothing like this acute, widespread poverty.

Other passages point to similarities between our experiences. The section on the sociopolitical sphere states: "Nonetheless, in many cases, political power is used today in an authoritarian way disguised as neo-populist regimes from different ideologies that have taken advantage of the discrediting of State's public institutions, while tapping into popular unrest. Democracy in our countries is described as 'fragile' and, in some cases, there is a real democratic crisis."

With the great state of Arizona about to elect an election denier as governor, we know that the U.S. is as prone as the impoverished countries of Latin America to authoritarianism masking itself as neo-populism.

The document links the process that produced it with the universal synodal process called by Francis, and it does so in words that are rich, specific and challenging:

The 2021-2023 process, similar to that of our Assembly, invites us to deepen the theology of the People of God by considering the action of the Spirit in the baptized, which is the anointing that constitutes the meaning of the faith of the faithful. The Pope comments on this phrase of the Council (cf. LG 12a): "The People of God is holy because of this anointing which makes it infallible 'in credendo'. This means that when it believes it does not err, even if it cannot find words to explain its faith [...] God endows all the faithful with an instinct of faith — the sensus fidei — which helps them to discern what really comes from God" (EG 119). This has animated our listening, has been the key to the Assembly, and should guide the future Synod.

It is obvious why this passage might alarm a certain kind of conservative thinker who believes that God has said all he has to say, and our only task is to follow his instructions as our forebears did. But I would submit there is also a certain kind of liberal thinker for whom the phrase "when it believes it does not err" is more problematic than they might want to admit. Inerrancy flows from faith, not the other way round. 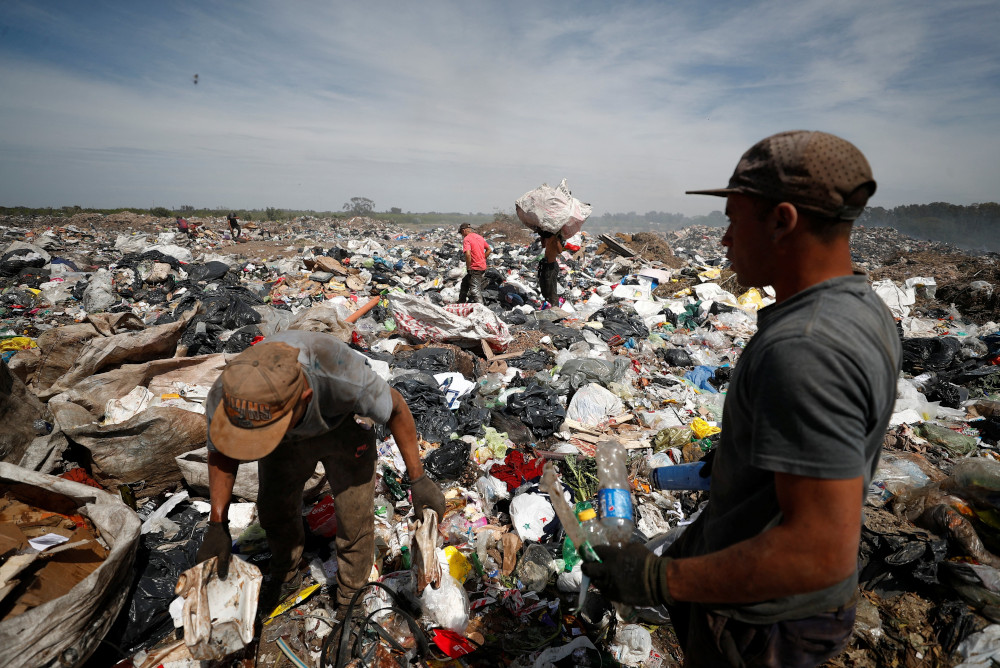 Waste recyclers look through heaps of waste for cardboard, plastic and metal, at a landfill in Buenos Aires, Argentina, Oct. 5. Among the challenges identified during the process of the Latin American church's First Ecclesial Assembly were social and economic inequalities exacerbated by the pandemic. (CNS/Reuters/Agustin Marcarian)

The passage on popular religiosity remind us that not everything that followed the Second Vatican Council was helpful. It was necessary to renew focus on the Eucharist but, in the U.S., popular religiosity was shunned. Reformers did not recognize the critical buttressing role it played in sustaining the faith. This document recognizes that "Catholic spirituality, from its different expressions so alive and significant, can come to the rescue of the human being, of his identity and his vocation to life. In it 'appears the soul of the Latin American peoples' and 'is the precious treasure of the Catholic Church in Latin America, which she must protect, promote and, if necessary, purify' (Benedict XVI, Aparecida inaugural address)." The text notes the role of shrines at which "simple people remember that their origin is in the Lord." (Alas, complex people need to find ways to remember that too!)

As the church in the United States renews itself — as it has always done — with the faith of immigrants, attention to the popular religiosity of immigrant communities will be critical if we want to help them persevere in the faith in a new and often bewildering, ambient culture.

The section on lay ecclesial culture deserves serious consideration. "It is urgent to overcome clericalism in all its expressions, among the Clergy, the consecrated, and even among the laity. … This implies enhancing the prayerful experience and the formation of the conscience of the People of God. It is necessary to share spaces of responsibility, decisionmaking and pastoral formation with Synodal participation."

I resist this urge to empower the laity in the U.S. until we have figured out ways to make sure that the influence of money does not corrupt these new ecclesial processes the way money has corrupted our political processes and some of our Catholic apostolates. It is naïve to think that empowering the laity in this country would not yank the Catholic Church toward an identity shaped by conservative politics as much as Lumen Gentium and Gaudium et spes.

The document also affirms the call of Francis — and of St. Pope Paul VI before him — for an integral human development. Evangelization is to be understood in an integral way and the church's witness must be characterized by integral ecology.

"The discernment made recognizes the call of the Spirit to effective and prompt action in the care of the common home, which shows the coherence of our convictions and is a witness that inspires others," the text states. "It is necessary to respond personally, communally and institutionally, through concrete actions, to the cry of the earth, the poor and the excluded, fostering an integral ecology in the light of the Gospel and the social doctrine of the Church."

I resist this urge to empower the laity in the U.S. until we have figured out ways to make sure that the influence of money does not corrupt these new ecclesial processes the way money has corrupted our political processes and some of our Catholic apostolates.

Here in the U.S. where the Laudato Si' ball has been repeatedly dropped, we see how far advanced our brothers and sisters to the South are in integrating ecological and apostolic witness. The phrase "the coherence of our convictions" is a kind of benchmark — one the U.S. church has failed to meet.

There is much to ponder here and much that can and should challenge those of us in affluent countries, as well as those of us who share in that most distinctive American characteristic today, placing our political and ideological identities in front of our Christian and Catholic beliefs.

There is also much that is not here. The text makes it clear that this is a snapshot in a process, not a definitive document. That, too, is key to the shift from a clericalist to a synodal church.

What is becoming clear, from this document — and from the synthesis of U.S. synodal reports produced by the U.S. bishops' conference and the Working Document for the Continental stage of the synod, produced at Frascati, Italy — is not so much that this issue or that is finally being discussed.

What is beginning to become apparent is that Francis, by inviting the universal church into a synodal process so much inspired by his own work with CELAM, is calling the church to renew itself by recalling God's promise to be with us until the end of time, and to take that promise seriously. St. Augustine and St. Thomas Aquinas did a lot of heavy lifting but that doesn't mean we get to slack off. We must gird our loins, as Scripture says, as we approach the task of renewal, prepared to shed our preconceptions and our agendas, our ideologies and our animosities, and surrender to the Holy Spirit.

What is becoming clear in these synodal texts is that the Spirit is stirring and we are being called to be attentive and obedient to the call of the Holy Spirit.