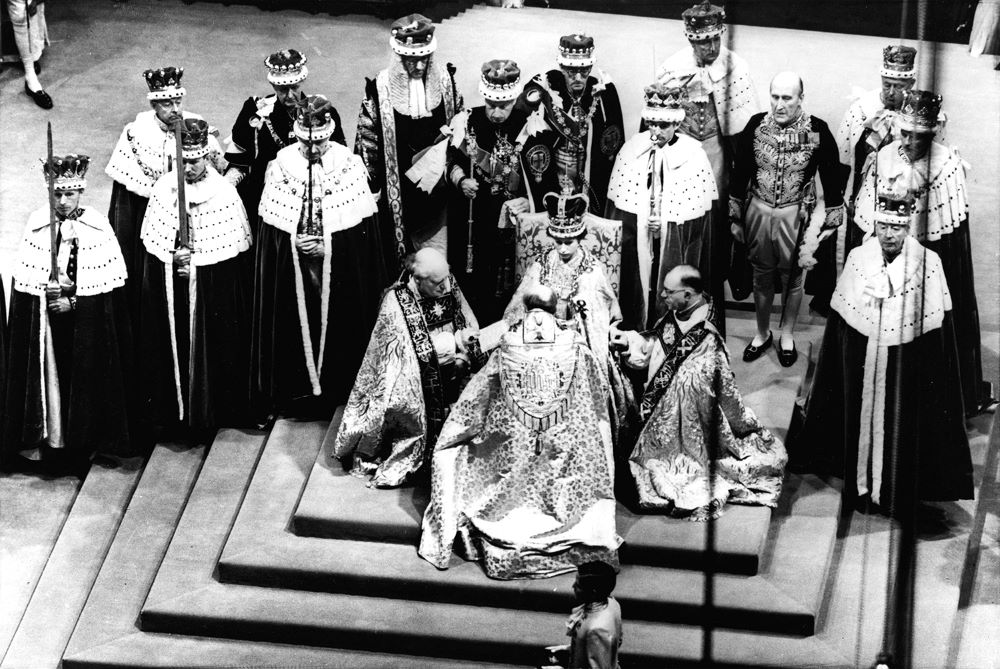 In this June 2, 1953, file photo, Britain's Queen Elizabeth II, seated on the throne, receives the fealty of the Archbishop of Canterbury (back to camera at center), the Bishop of Durham (left), and the Bishop of Bath and Wells, during her coronation in Westminster Abbey, London. (AP)

The outpouring of affection for Queen Elizabeth II has surprised cynics and those who believe that self-interest and greed make the world go 'round. It is incomprehensible to some that millions of people around the world would care that the 96-year-old head of an anachronistic institution has passed away.

But people saw something special in Elizabeth — more than the pageantry and splendor of the monarchy, the celebrity eye candy that surrounded her. There was more to the queen.

A leader who took duty and responsibility seriously, she fulfilled the vow she made on her 21st birthday: “I declare before you all that my whole life whether it be long or short shall be devoted to your service. …”

Not all monarchs have put their people ahead of themselves.

The 16th-century language and piety of Ignatius can sound antiquated, but the response to Elizabeth II shows that there is something of the 16th century still alive in many of us.

In the Bible's First Book of Samuel, when Israel asks God for a king, he warns them:

He will take your sons and assign them to his chariots and horses, and they will run before his chariot. … He will make them do his plowing and harvesting and produce his weapons of war and chariotry. He will use your daughters as perfumers, cooks, and bakers. He will take your best fields, vineyards, and olive groves, and give them to his servants. He will tithe your crops and grape harvests to give to his officials and his servants. He will take your male and female slaves, as well as your best oxen and donkeys, and use them to do his work. He will also tithe your flocks. As for you, you will become his slaves.

Too many kings of Israel showed God was right. Like many rulers today, they were corrupt and incompetent. Even David and Solomon were flawed. Israel had its own system of checks and balances, however: Other nations put all spiritual and temporal power into their kings; Israel wisely had kings to rule, priests to lead worship and prophets to speak God’s words of challenge to the powerful.

With all this history, it is not surprising that Jesus was reluctant to accept the title of king. Rather he imitated and quoted the prophets. He only accepted the title of king when he had become a prisoner before Pilate, and then he insisted his kingdom was not of this world. His throne would be the cross.

As a young man, St. Ignatius Loyola, the founder of the Jesuits, was enthralled with the culture and glamour of the Spanish royal court in the 16th century. He wanted nothing more than to be a knight dedicated to the service of the king and a certain court lady with whom he was infatuated.

All this ended when he was hit in the leg by a cannonball during a battle at Pamplona in 1521. During his recovery the only reading material available were two books: The Life of Christ and Flowers of the Saints. He was inspired by these to turn his attention from the monarchy to Christ.

Later, when he collected his prayers and meditations into the Spiritual Exercises, he asked readers to meditate on the call of an earthly king who invites people to follow him in conquering “all the lands of the infidels,” something all European Christians at that time devotedly desired. This was a heroic king for whom the earlier Ignatius would have gladly devoted his life.

But then he asks the retreatant to meditate on the call of Christ, “It is my will to conquer the whole world and all my enemies, and thus to enter into the glory of my Father. Therefore, whoever wishes to join me in this enterprise must be willing to labor with me, that by following me in suffering, they may follow me in glory.”

This battle would not use swords and canons; it would instead follow in the footsteps of the crucified Christ preaching the Gospel. Rather than seeking worldly glory through force and violence, it would seek humility and justice through self-sacrifice and suffering.

Ignatius symbolized this radical change in his life by leaving his sword before a statue of the Black Madonna at the Abbey of Montserrat. For Ignatius, if Christ is king, then Mary, the teenage mother of Jesus, is also queen.

The 16th-century language and piety of Ignatius can sound antiquated, but the response to Elizabeth II shows that there is something of the 16th century still alive in many of us. We still long for a powerful leader who shows humility and a commitment to duty and service. We want someone we can look up to and admire. We want someone who is worthy of imitation.

More than any human, that person is Jesus Christ, priest, prophet and king. Or as Ignatius would say, if you think Queen Elizabeth is great, take a look at Jesus and Mary. I think Elizabeth would agree.