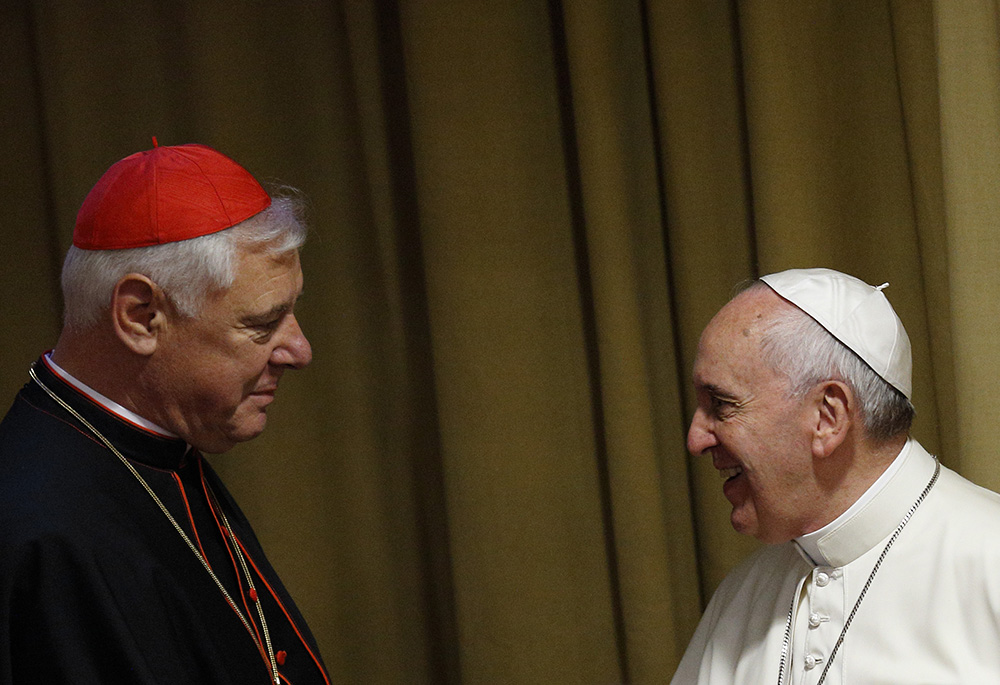 Cardinal Gerhard Müller, then-prefect of the Congregation for the Doctrine of the Faith, greets Pope Francis before the morning session of the extraordinary Synod of Bishops on the family Oct. 13, 2014, at the Vatican. (CNS/Paul Haring)

Several people asked if I would be responding to George Weigel's "Open Letter" to Cardinal Mario Grech, the secretary-general of the Synod of Bishops, which Weigel published in First Things. To be honest, Weigel is losing the ability to provoke me. His arguments are tired, more than anything, and they all come down to one argument, that St. Pope John Paul II’s pontificate was a Golden Age and it has been more or less ruin ever since, at least since the election of Pope Francis. Listening to Weigel is like listening to one of those old 45 records that you put on the phonograph, but forgot to adjust the setting from 33: The result is egregiously distorted. And I do not believe in Golden Ages.

I felt the same way listening to Cardinal Gerhard Müller, the former prefect of the Congregation for the Doctrine of the Faith, who went on Raymond Arroyo's "The World Over" on EWTN last week. The two whined about the synod endlessly, comparing its method to those of a democratic political process, despite the fact that Pope Francis has said repeatedly that a synodal process is vastly different from a parliamentarian one. What is clear is that there is no affective communion between either the cardinal or Arroyo, and one wonders if that fact will cause the U.S. bishops to take steps to rein in EWTN.

Not every exercise in ridiculous ecclesiology comes from the bleachers on the right. The Wijngaards Institute, building on the work of the 2021 Root and Branch synod held in Britain, has proposed a written Constitution for the Catholic Church. Setting aside the fact that the ecclesiology proposed looks nothing like the ecclesiology of the Catholic faith in any century to date, the idea of a written constitution is a bad one, inviting a perpetuation of excessive legalism the Western church inherited from the Roman empire. The challenge of our time is to balance that legalism with a greater focus on the role of the Holy Spirit.

The New York Times reports on the back-to-back interviews on CBS this weekend, featuring Arizona’s two gubernatorial candidates. The Democrat, Katie Hobbs, has refused to debate her opponent, Republican Kari Lake, claiming Lake would turn it into a "circus." Hobbs may be right about what Lake would try to do. Of all the Republican nominees this year who seem too extreme to believe, Lake stands out as one of the craziest. But that does not absolve Hobbs of the obligation to debate. They are a necessary part of our political system, and if Hobbs can't figure out how to fend off Lake in a debate, how will she cope with other unhinged politicians in the legislature?

In The Washington Post, columnist Jennifer Rubin shows the extent to which the Dobbs decision on abortion has left some thinkers unhinged. Rubin argues that abortion bans infringe on the religious freedom of those whose religion does not value fetal life. She cites a lawsuit filed in Kentucky, which states, correctly, “The question of when life begins for a human being is a religious and philosophical question without universal beliefs across different religions.” I shall let Rubin, and the litigants, in on a little secret: All law rests on religious or philosophical conclusions that lack universal belief across different religions, but “Thou shalt not kill” is as close to a universal law as there is. To answer the question of when life begins, we humans get to use whichever kind of ideas we want, religious, philosophic and scientific.

At Architecture Daily, a series of articles around the theme of well-being, to mark World Architecture Day, which was Oct. 3 this year. The article on how mixed-use neighborhoods help reduce crime rates and the one on the challenge of cooling interiors to help combat climate change demonstrate the ways architects are embracing holistic understandings of their craft. And, many of the resulting projects are just beautiful.