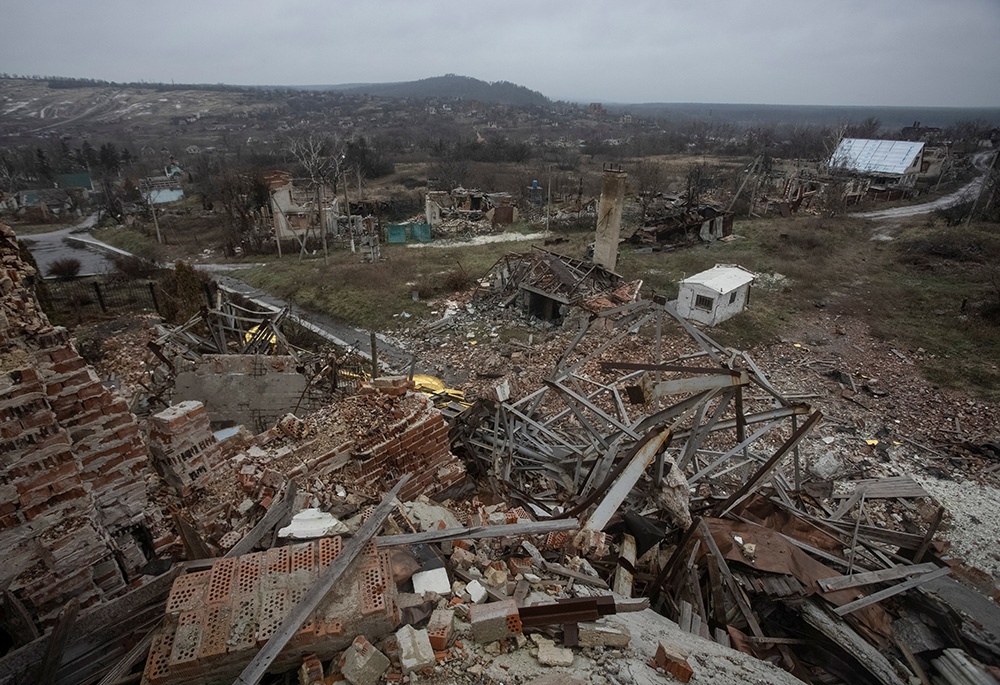 A destroyed Orthodox church is seen Dec. 8, 2022, in Bohorodychne, in the Donetsk region of Ukraine. (CNS/Reuters/Yevhen Titov)

This will be my last links column! In the new year, I will be launching a weekly newsletter that will serve some of the same functions — calling attention to items of interest to Catholic thinkers, policing the culture, etc. — but that will come out weekly. You can sign up for it by clicking here. (The newsletter will automatically be sent to those who already receive email alerts about my columns.)

When columnist Paul Krugman is good, he is really good. This week in The New York Times he asks why petulant oligarchs rule our world. His answers are spot-on and his insights — e.g., "social critics like John Kenneth Galbraith and speculative writers like William Gibson generally imagined corporatist dystopias that suppressed individuality — not societies dominated by thin-skinned egomaniac plutocrats acting out their insecurities in public view. So what happened?" — are hilarious.

It is not every day that I defend former President Donald Trump but the Ways and Means Committee's decision to release his taxes shows he was diligent in paying as little federal income tax as possible. When asked about this during a debate in 2016 about taking massive tax write-offs, he said he did and asked why, if it was so wrong, Hillary Clinton had not done more in the Senate to close the loopholes. Trump was right. He may or may not have been personally corrupt regarding taxes, but the tax code as a whole is corrupt.

At Foreign Affairs, a very depressing but sober look at what might happen if, as appears increasingly likely, Russia's war effort fails completely. Some of the scenarios are horrifying and none of them are pacific. "Putin's invasion of Ukraine as a first step in refashioning a Russian empire has had the opposite effect," writes author Liana Fix and history professor Michael Kimmage. There is little to reason the ending of the war will not have similarly surprising, and challenging effects from acute destabilization within Russia to a system of "great-power anarchy."

Congressional negotiators have reached agreement on Medicaid funding for Puerto Rico and other territories, which was set to expire with the last of the COVID-related financing. The proposal also increases the share of Medicaid expenditures paid for by the federal government from 55 cents per dollar to 76 cents, the same as Mississippi, the nation's poorest state. The omnibus bill still needs to pass both houses of Congress for these provisions to take effect.

The Brennan Center for Justice at NYU Law School released its last audit of election laws for the year. In addition to the seven states that enacted voter restriction laws, another seven enacted what are called "election interference laws" that allow partisan interference in elections or threaten election workers. Twelve states and the District of Columbia enacted laws to improve access to voting. Republican resistance to early voting and vote by mail seems to have been a boon for Democrats, so maybe we will see GOP-controlled states shut that down entirely or get with the program and mount their own early voting efforts.

This will be my last posting before Christmas. It is a hard Christmas this year. As my colleague Chris White reported earlier this week, Ukraine is still experiencing a crucifixion. His reporting called to mind something Pope Pius XII said in his first Christmas allocution as pope, which was quoted by Anna Rowlands in her new book. Pius said the supernatural peace that the Christ child brings was "gained not with steel, but with the wood of the cradle of this Infant Savior and with the wood of His future Cross of Death, stained with His blood — not the blood of hate or rancour, but that of love." I pray that this Christ, Christ who was born, crucified and raised will come into your hearts and into the hearts of all who suffer the horrible effects of this war.