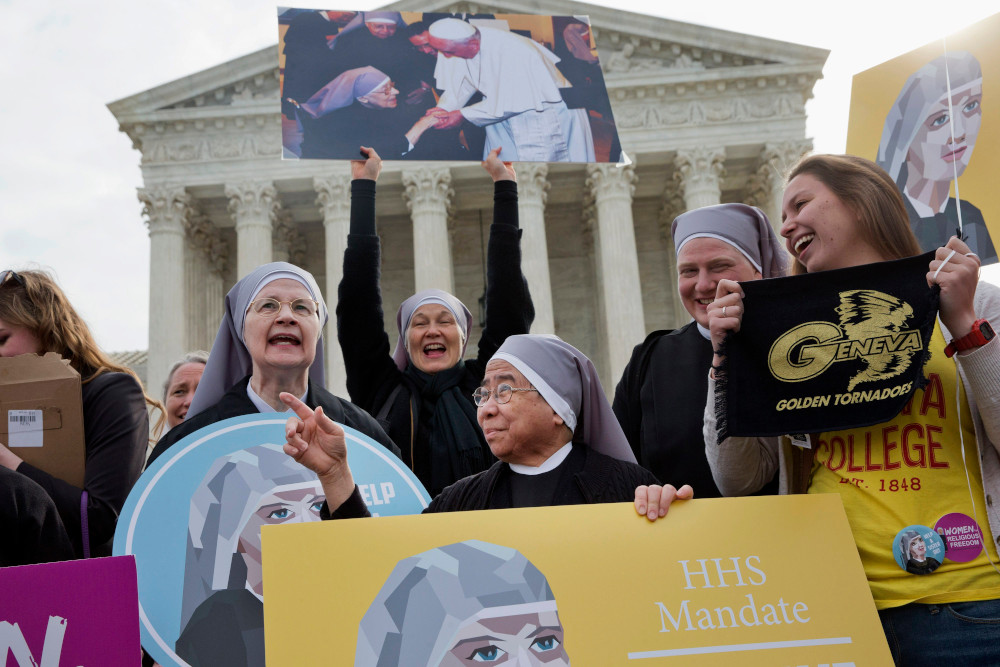 Nuns with the Little Sisters of The Poor, including Sister Celestine, left, and Sister Jeanne Veronique, center, rally outside the Supreme Court in Washington, Wednesday, March 23, 2016, as the court hears arguments to allow birth control in healthcare plans in the Zubik vs. Burwell case. (AP/Jacquelyn Martin)

The Little Sisters of the Poor are back in court litigating the birth control mandate of the 2010 Affordable Care Act, which the sisters claim forces them to act contrary to their faith.

Seen as one of the signature achievements of the Obama administration, the ACA, also known as Obamacare, requires most employers to provide free birth control coverage to their employees through their health insurance plans. The sisters, who run nursing and retirement homes for the elderly, say this infringes on their religious freedom, since they would be paying for a practice that violates church teaching.

Haven’t we seen this movie before? Didn’t this issue get resolved by the U.S. Supreme Court in 2016 when it heard Little Sisters of the Poor Home for the Aged v. Burwell? Is this rerun truly necessary?

The answers are yes, no and, I would argue, no: The Supreme Court shouldn't be required to settle what the parties ought to have settled themselves.

As someone who believes that women have a right to birth control but also believes that government should respect people’s religious beliefs, I see this controversy as both a tragedy and a farce. If there had been goodwill on both sides, litigation would not have been necessary. In fact, each side was suspicious of the other and any kind of deal became impossible. A pox on both their houses.

It all started badly when the Department of Health and Human Services published proposed regulations for implementing the contraceptive mandate. To say that they were poorly written is being polite. The HHS lawyers were experts in health care law, not issues of religious freedom. Asking government regulators to foresee the objections of Catholic nuns was like asking a divorce lawyer to defend you in a murder trial.

I know this is true because I got a call from one of the HHS lawyers asking for help. If they had to call me for help, they were in big trouble. I recommended they speak to Melissa Rogers, a brilliant lawyer and good Baptist.

The original regulations left the administration open to severe criticism both from religious groups and from Republicans who hated the ACA. They saw the regulations as a planned assault on religion rather than merely a case of incompetence.

Remember, at the same time, HHS had denied the refugee agency of the U.S. Conference of Catholic Bishops a government grant for helping trafficked people because it would not refer its clients for birth control or abortion services. It looked like an organized conspiracy against religious believers.

After a few more tries, the Obama administration finally issued regulations that completely exempted churches and provided a workaround for religiously affiliated employers like the Little Sisters of the Poor. The workaround was complicated because the insurance and constitutional questions are complicated, but in effect it allowed the institutions to offer insurance without birth control but required someone else — the insurance company itself or a third-party administrator — to provide birth control to their employees without charging the institution. The administration hoped that this would resolve the conflict.

There were problems with the workaround.

First, the institutions said the notion that insurance companies would provide birth control without charging them was a fiction. The administration responded with an economic study showing that it was in the insurance company’s financial interest to provide free birth control because it was cheaper than paying for births, especially complicated births. There really was no net increased cost for providing birth control.

Second, the government required the institutions to sign and send in to the government a form stating that they did not want birth control in their insurance plan. The Little Sisters maintained that even signing the government-mandated form would be “cooperating with evil.” They described it as a “permission slip” that would allow someone else to provide contraceptives.

Only the most scrupulous conscience would have a problem with notifying the government of their opposition to birth control. But the Catholic bishops and Little Sisters were being advised by extremely conservative moralists and lawyers. In addition, some bishops and Republican Catholics saw a fight over religious freedom with the Obama administration as politically advantageous. One cardinal archbishop, Francis George of Chicago, admitted he had hated Democrats ever since Mayor Richard J. Daley fired his father from a city job.

At one point, Cardinal Timothy Dolan of New York met with President Barack Obama to try to work out their differences. After the meeting, Dolan said he was hopeful matters could be resolved, but he was forced back off by other bishops.

Before the final regulations were issued, I participated in a conference call with Obama White House staffers who were looking for support for their regulations. I warned them that their workaround would not satisfy the bishops. “Why do they have to send in a form? Can’t they just tell their insurance agent they don’t want contraceptives and then let the agents take care of the paperwork?”

They responded that the complexity of the industry made my suggestion unworkable. In any case, the train had already left the station. Besides, there were those in the White House (not Obama) who believed that fights with the bishops were to their political advantage. “If the bishops don’t like the workaround,” they could tell Planned Parenthood, which opposed any exemptions, “then it must be good.”

When the controversy went to court, the Little Sisters of the Poor were listed as the principal plaintiff because the lawyers knew they were a more sympathetic client than a bishop. Nobody, not even the U.S. Supreme Court, wants to be on the wrong side of the Little Sisters, a group of women who have given up everything to care for the elderly. In their habits and smiles they are just too photogenic.

In truth, the “little” sisters are quite big. They operate in about 30 countries, and in the U.S. they have around 30 residences or homes for the elderly. That amounts to a lot of employees, the majority of whom are women.

In 2016, the Supreme Court, short one justice because of the death of Justice Antonin Scalia, seemed deadlocked 4-4 by some of the same conflicts I was harboring: They wanted to uphold Congress’ right to mandate coverage of birth control, but also wanted to respect the consciences of the Little Sisters.

In the end, they punted, sending the case back to the lower courts with instructions for the federal government and its opponents to try to work out a solution that would allow employees to receive full contraceptive coverage while still respecting the employers’ religious beliefs.

Meanwhile, Donald Trump became president and his new administration provided broad new exemptions to private employers from the contraceptive mandate if they had religious objections. Trump’s new rule also expanded the exemption to for-profits, including publicly traded businesses. This did not please proponents of the mandate, such as the states of Pennsylvania and New Jersey, which were able to convince a district court to strike the new Trump rules.

If the Supreme Court rules merely that the government violated administrative law, it can (again) avoid dealing with the substantive issues and make the government start the rule-making process over from the beginning.

If the court rules in favor of the government, the words to watch for in the decision are whether it says the government "can" or "must" provide an exemption. The latter would open the possibility for many, wide-ranging exemptions in other areas. This is the outcome desired by the Trump administration, the Catholic bishops and some evangelical leaders. They believe that the court has changed sufficiently with Trump’s appointments that they will score such a broad win.

If this happens, it will show how foolish the supporters of the contraceptive mandate were to not sit down and negotiate in good faith with the other side. Rather than compromise, they will lose big.

On the other hand, if the court says the government "can" provide an exemption and Trump loses reelection, the winners may again become the losers because the next Democratic administration will reverse the Trump rule. If this happens, it will show how foolish the opponents of the contraceptive mandate were to not sit down and negotiate in good faith with the other side. Rather than compromise, they will lose big.

And don't forget, states may have their own contraceptive mandates, which allows this fight to continue on the local level unless the Supreme Court's ruling is extremely broad. Meanwhile, employees, religious institutions, insurance companies and health care providers must deal with this roller coaster.

Sadly, this case is not unique. There are too many areas of American life where opponents are not willing to negotiate and compromise for the common good. They enjoy fighting too much. It energizes their base and helps in fundraising. Would that we could return to the old-fashioned value of working together to solve problems.