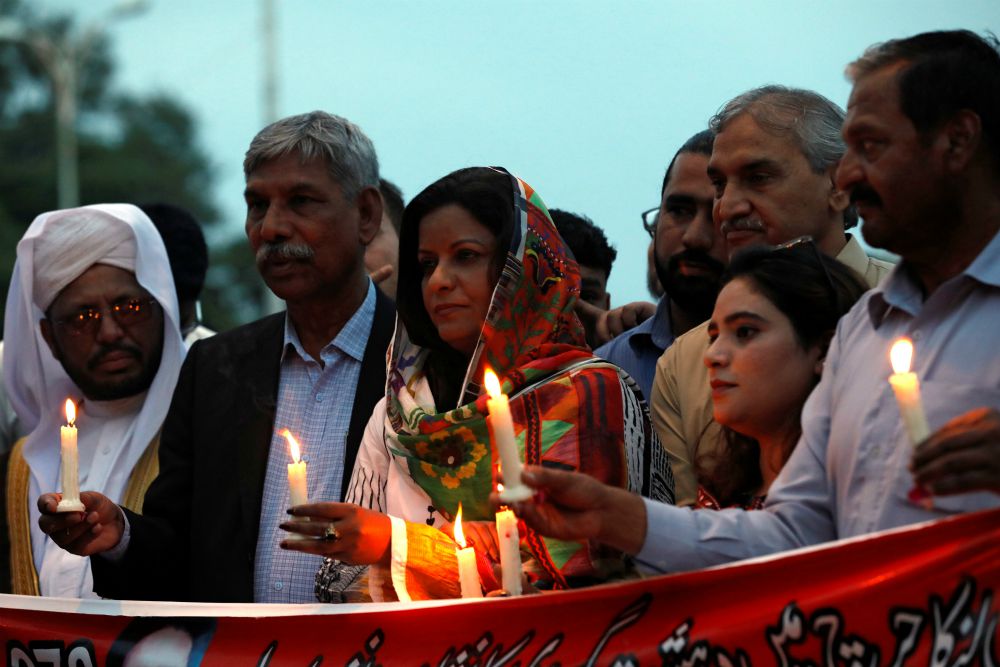 This first thing we notice, I believe, as we listen to this Gospel account of the empty tomb is the two different reactions by Peter and John. They both notice everything that was there in the tomb, how the cloths had been laid apart separately and folded carefully. Peter looked and evidently was puzzled and left. John looked and accounts in his word, "He believed" — big difference between the two of them.

As I reflect on this event, I often think about St. Óscar Romero, the archbishop of El Salvador who was murdered on the Monday of Holy Week in 1980. This, year, this past year he was declared a saint.

Easter Sunday: The Resurrection of the Lord

Shortly before he was shot and killed while he was celebrating Mass, the archbishop had been interviewed by a reporter calling from Mexico. The reporter asked him, "Why don't you flee the country, leave? They're going to kill you." His name was on the death list; everybody knew it. But the archbishop said, "Of course I've been threatened with death many times, but I don't believe in death without resurrection. Even if they kill me, I will rise again in the Salvadoran people."

He had complete faith in the Resurrection.

He went on to say, "As a shepherd I'm obliged by divine mandate to give my life for those I love, that is, for those who may be going to kill me." His faith was so strong, he could still love his murderers. He finally said, "If in fact they kill me, you may tell them right now that I bless and love those who do it."

Here is a person who, like John in the Gospel, has complete trust, belief, confidence that Jesus is risen from the dead and that his resurrection is a sign, a promise of our resurrection that we too will rise from the dead and share everlasting life and joy, fullness of peace and happiness forever in our risen life.

There's a place in the Gospel where a man comes up to Jesus and says (it's a prayer), "Lord, I believe. Help my unbelief." Maybe that's the way many of us are — not like Óscar Romero who had total confidence, not like John who when he saw that empty tomb and all that Jesus left behind had total faith. Maybe we're more like the person in the Gospel. "Yes I believe, but help my unbelief because it's a struggle." Sometimes we think that faith is a gift and once we have it, we'll never falter. Not true. Faith is a choice.

Here's the difference between John and Peter, I think. You may remember through the Gospels that John was probably the closest friend of Jesus among the 12. John and Jesus had a very real, rich relationship. John loved Jesus and he listened deeply to what Jesus said. It didn't just pass him by kind of carelessly when Jesus said, "I'm going up to Jerusalem, will be given over to my enemies, tortured, crucified, but then will rise from the dead." John heard all of that, and it made a deep impression on him.

In fact, Jesus said that three times. The other disciples heard it, but like Peter, they really didn't take it in. John did, and then when he entered that tomb, he immediately knew the truth. He accepted it, he believed it, and he lived it. That's the choice we have to make. We have to choose to believe. It's not some special grace God will pour down upon us. We have to listen to Jesus as we do every week in the sacred liturgy. We have to try to understand Jesus. We have to promise to follow Jesus, to live his way. That's what it means to share in the gift of the Resurrection — make that choice: I believe Jesus rose from the dead and that he shares that gift of risen life with me.

Today is a day when we renew that belief and try to deepen it within our hearts and our spirit, so that as St. Paul urged those Christians in that community of Colossae, "Don't just think about the things of Earth. Remember, now focus your attention on the things of heaven, on God and God's way, God's teachings through Jesus. Focus on this and change your life as one who believes that Jesus is risen."

And then, the other thing for us to do is like Peter, finally, as he became a strong believer, he went out and began to share that good news. He goes to the house of a Roman citizen, a gentile, and instructs him and his family in all the teachings about Jesus. And as the passage goes on from the point we listened today, "Suddenly the Holy Spirit comes upon all those people, and they shared the life of Jesus." Peter has preached to them, they believe, they're now alive in Jesus.

We have to make our lives that message of Jesus, preach Jesus, not so much in our words, but how we live, how we treat one another, how we share the goods that we have, how we reach out wherever people are in need. That is what we must try to do as we follow Jesus. When I was hungry you gave me to eat, thirsty you gave me to drink and so on. We all know those. We have to do them more faithfully. That's how we live the risen life.

So this morning, we celebrate this most important event in all of human history when Jesus destroyed death and brought new life for any one of us, every one of us. As we celebrate that, we commit ourselves like John, like Óscar Romero. I believe, and if I need the help, help my unbelief. Strengthen me in my faith and my conviction so that I say that sincerely, with total conviction, "Jesus, I believe you have risen from the dead. I believe that you share that risen life with me. I will follow you till I come to the fullness of that life in heaven."

Editor's note: This homily was given April 21 at St. Ambrose Church in Grosse Pointe, Michigan. The transcripts of Bishop Thomas Gumbleton's homilies are posted weekly to NCRonline.org. Sign up here to receive an email alert when the latest homily is posted.