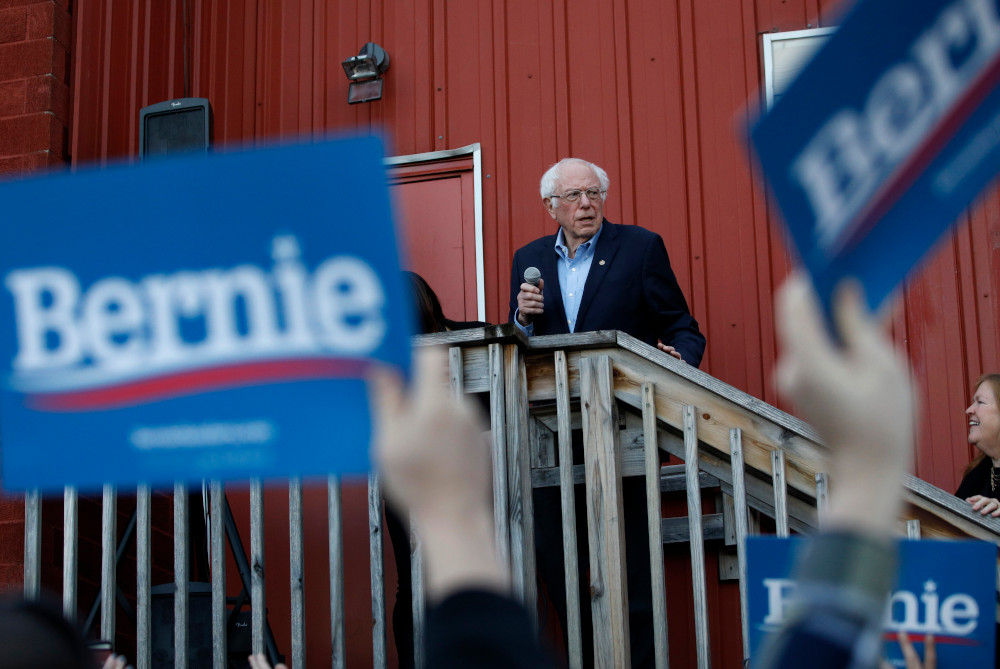 Five Super Tuesdays ago, E.J. Dionne observed, "There is no Catholic vote, and yet it matters." The Washington Post columnist, Brookings Institution scholar and Georgetown University professor was pointing to the fact that Catholics do not vote as a bloc as some other religious and ethnic groups do, but nonetheless end up voting for the winner of presidential elections.

And yet if you look at the candidates for the Democratic nomination, it is hard to find any making an overt or even subtle appeal to Catholic Democrats. It is the dog that didn't bark.

The silence is so profound that when the Bloomberg campaign ran a tweet mentioning Pope Francis ' response to the synod on the Amazon, it drew attention purely for its uniqueness. But then, billionaire Michael Bloomberg has plenty of money to throw at everyone, even Catholics.

Democratic candidates tend to focus instead on other voter groups: blacks, Hispanics, LGBTQ people, young people, teachers and women. All but the last are solidly Democratic and therefore are more often appealed to in presidential primaries and caucuses than they are in the general, when party flippers and independents are up for grabs.

Most Democratic candidates believe that appeals to Catholic voters would cut into their support from feminists and LGBTQ people, Democratic pillars who, along with teachers' unions, see the Catholic Church as antagonistic to their agenda. Why stir up problems with these groups to chase the elusive Catholic vote prior to the nomination? After the nomination, the strategy may change, but not during the primaries.

Abortion comes up quickly when people talk about the Catholic vote. In truth, a slight majority of Catholic voters want it to be legal, according to recent polling, but like half of Americans, they don't like it and most don't want it funded by the government.

But for too many Democratic activists, abortion has become a litmus test of Democratic orthodoxy. There is no room for a Democratic candidate who is anti-abortion for office at any level, even if the alternative is a Republican win.

Nancy Pelosi, on the other hand, understands she cannot continue to be speaker of the House without the election of Democrats in swing districts where anti-abortion Democrats have a better chance of winning. She has noted that most members of her extended family are not pro-choice, asking, "You think I'm kicking them out of the Democratic Party?"

Most Democratic candidates make little effort to speak about abortion in a way that would encourage anti-abortion voters to join them. Obviously, the Democrats would never support making abortion illegal. Most candidates have committed themselves to public funding of abortion in some form.

But in talking about abortion, it would be helpful if Democratic candidates stressed that their programs — health care, including contraceptives; day care; raising the minimum wage; family leave; and programs helping the poor — in fact reduce the number of abortions. Data on abortion shows that the numbers go down during Democratic administrations and go up during Republican administrations. Anti-abortion voters might be swayed by asking them, "Do you want Republican rhetoric or Democratic results?"

But abortion is not the only issue Catholics are concerned about. It would not hurt Democrats every once in a while to drop in a quote from Pope Francis when speaking about climate change. Or how about quoting the pope about "building bridges, not walls."

And although the U.S. bishops have said that abortion is the preeminent issue of our time, their quadrennial election-year document, "Faithful Citizenship," is filled with proposals that are reflected in the Democratic platform. Likewise, their press statements on refugees, immigration, climate change, Medicaid and other social programs are in sync with the Democrats' agenda.

John Kerry, a Catholic who was attacked for his position on abortion when he ran for president in 2004, did not even know "Faithful Citizenship" existed until after the election. If he had, he said, he would have quoted from it on the campaign trail.

Will such strategies turn Catholics overwhelmingly to the Democratic Party? No. But in a close election with Catholic voters almost evenly split between Republicans and Democrats, they could be key to winning those prized swing states that could determine the outcome in November. Democrats ignore them at their peril.

It is not only Democratic candidates who ignore the Catholic vote. The media does too. Exit polls in the recent New Hampshire and South Carolina primaries asked about church attendance but none of the exit polls asked about denomination. As a result, there is no way to know how Catholics are voting in primaries.

Do Catholics make a difference in primaries? Yes. In 2008, Hillary Clinton needed the overwhelming support of Catholic voters if she wanted to overcome Barack Obama's advantage with the black vote. She readily won the Catholic vote in New Hampshire, but in later states she did not do as well. In 2012, Republican Catholics consistently voted for Mitt Romney in the primaries, while evangelicals split their votes among several candidates, many of whom were Catholic.

Since the exit polls no longer ask about religion, we have no idea what difference the Catholic vote has made in more recent primaries.

National public opinion polls give us some information. The Pew Research Center poll showed that in January Catholics preferred Joe Biden with 34%, Bernie Sanders with 14%, Elizabeth Warren with 10%, Bloomberg at 8% and Pete Buttigieg 7%. Sixteen percent were up in the air.

The current primary season may well already have been determined by Catholic voters, especially Hispanic Catholics. Biden's defeat in Nevada was forecast by the same Pew poll, which showed that 29% of Hispanic Catholics preferred him, but Sanders was a close second with 25%. White Catholics preferred Biden over Sanders by 37% to 14%. In Nevada, Sanders took 50% of the Hispanic vote to 17% for Biden. Without more of the Hispanic Catholic vote to counter Sanders' advantage with the religiously unaffiliated and younger voters, Biden cannot win the Democratic nomination.