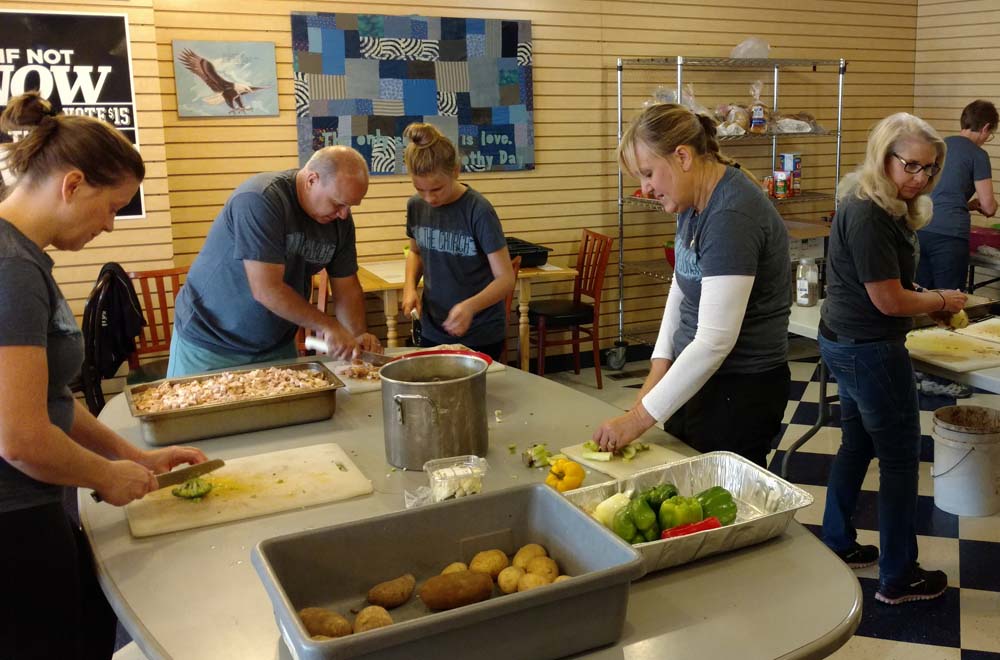 After the breakfast spread of egg casseroles, biscuits, cinnamon rolls and fruit salad, members of my congregation moved upstairs to the sanctuary to be commissioned for our fourth annual "Be the Church Sunday" in late October.

When a brief service ended, more than 200 of us went off to work at one of 10 local agencies that do welfare, poverty and justice work.

What I didn't know was that by the time my work was done that day I'd be smacked upside the head again by the punitive realities of poverty.

The work became our worship for that day. Only this year we were joined by half a dozen or so other Presbyterian churches in our area and several hundred of their members. This "Be the Church" idea is spreading.

Wait. Isn't each congregation supposed to "be the church" every day? Well, yes, but for this special annual event our goal is to do hands-on work that reminds us of our need to be a healing presence in the broken world beyond church building walls.

Like last year, I worked this year at Cherith Brook, a Catholic Worker house overseen by a Presbyterian pastor and his family. I wrote about that ministry for NCR several years ago.

"Be the Church Sunday" attracts enthusiastic supporters but also a few who aren't happy with the concept. Which sort of astonishes me.

One elderly man (meaning he's at least a decade older than me) told me a couple of years ago when this special Sunday arrived that he'd use the occasion to go to a different worship service at a nearby church because our church wasn't offering traditional worship.

I love this man but I called his bluff. It turned out that for that morning I was leading a worship service at an HIV/AIDS nursing facility that my church helped to start. So I invited my friend to come to that service. He didn't.

Mostly, however, the idea of spending part of a Sunday doing work outside the sanctuary is a fun, meaningful break for people. It can also break your heart.

One of my tasks this year was to go through boxes of candles — all types — donated to Cherith Brook and sort out which to keep. Candles? Well, as explained by Jodi Garbison, who, with her husband, the Rev. Eric Garbison, oversees Cherith Brook, candles are what homeless people often use for night lights. I hadn't thought much about that before. Volunteer and learn.

I also sorted through donated individual containers of shampoo, conditioner, soap and body wash, putting them in bins for use the next week, when Cherith Brook would provide showers to homeless folks. It made me wish I had swiped more hotel shampoo bottles and soap bars over the years for this collection.

In fact, I had just spent a few days staying in a New York City hotel as I made a pilgrimage to see the 9/11 memorial sites where my nephew died, and I could have walked out with the shampoo and other toiletries I hadn't used. But I wasn't thinking much about the needs of homeless folks then. Sort of like most of us most of the time.

Cherith Brook is in a hard-scrabble part of Kansas City, east of Downtown. The work police do there can be trying. But while I was there that Sunday, Jodi recounted a recent story of how she and her family were caught up in bad police behavior and even had spent unwarranted time in jail because of it.

It was a traumatic time for the Garbisons, who've spent more than a decade at Cherith Brook doing important ministry. But all that history didn't shield them from what certainly sounded like police misconduct. So "Be the Church Sunday" reminded me of why, in a wounded world, the church, meaning the people, must offer a healing balm outside the church building.