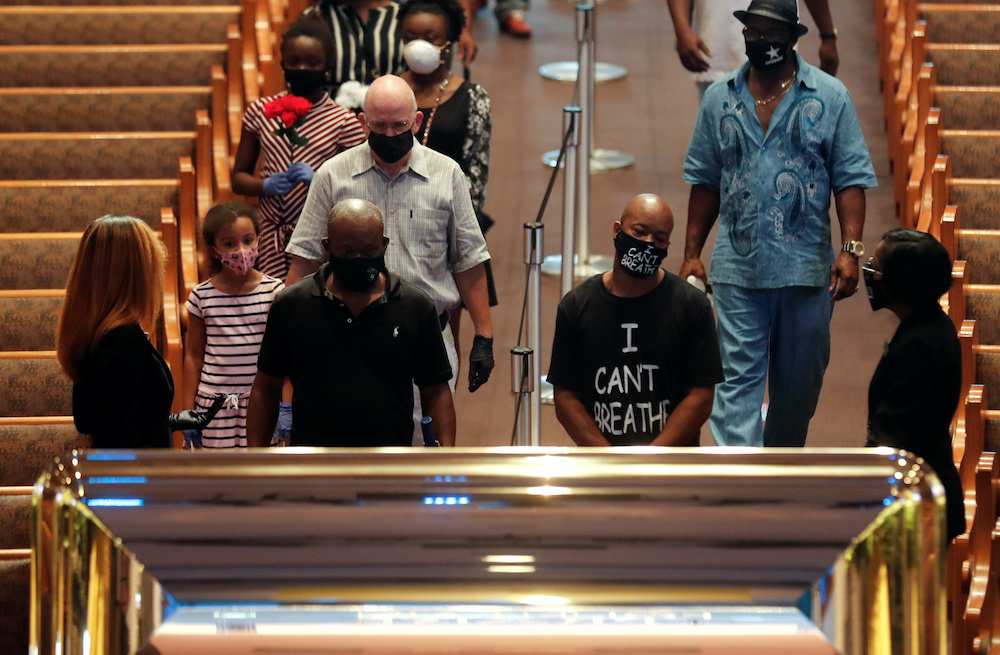 People in Houston pay their respects during the public viewing for George Floyd June 8. (CNS/Reuters/Carlos Barria)

As I watch tumultuous, yet largely peaceful, nationwide demonstrations following the murder of George Floyd at the hands of Minneapolis police, I reflect that our country is at a turning point.

In biblical terms, we are being "put to the test" or entering a "time of trial." Both phrases are alternative renditions of the much debated "lead us not into temptation," translation from Matthew's "Our Father" (Matthew 6:9-15).

Just a year ago — to get away from the idea that God leads anyone into temptation — Pope Francis approved a new Italian version that also evokes a testing time: "do not let us fall/be abandoned to temptation."

I have pondered the meaning of being "put to the test" for years. I prefer this interpretation because it reflects our human experience of being faced with the challenge of being faithful to God's values in a society or social system that has run amok.

Think Franz and Franziska Jägerstätter standing alone against Nazism and Hitler in their small Austrian village at the cost of Franz's life.

Think Jean Donovan — raped and murdered because she chose to stay with the children in a corrupt El Salvador: "Several times I have decided to leave El Salvador. I almost could except for the children. ... Whose heart would be so staunch as to favor the reasonable thing in a sea of their tears and helplessness. Not mine, dear friend, not mine."

Think Dr. Martin Luther King assassinated for his persevering leadership of the civil rights movement despite repeated death threats. Or Medgar Evers, murdered in Mississippi 57 years ago this month because he would not stop registering African Americans to vote. He died in front of his wife and children.

Like Jesus, each of these justice seekers was brought to a "time of trial," and "put to the test" on behalf of God's values. Like Jesus, their decision to witness-unto-death shone fresh light on the death-dealing systems they struggled to resist and to change.

Which is why Jesus instructs us to ask for God's help in a world too often seduced and corrupted by the power of evil.

A world like the one we are living in right now.

In his recent book, The Wounded Shepherd, Austen Ivereigh discusses Francis' insight that while it is difficult for the self-sufficient rich to receive the good news, the poor — who remain poor no matter how hard they work — can more easily understand the Gospel.

This is because they are able to grasp that "the real strength was not theirs but God's … they could more easily become channels of God's power as He worked through history to create a new people."

Ivereigh cites the pope's Oct. 14, 2018, homily canonizing Archbishop Óscar Romero and Pope Paul VI: "[W]here money is at the center, there is no room for God, nor for man. … our heart is like a magnet: it lets itself be attracted by love, but it can cling to one master only and it must choose: either it will love God or it will love the world's treasure (cf. Mt 6:24)."

I submit that despite 400 years of deadly racial persecution, our black sisters and brothers have become privileged channels of God's power to create a new people. 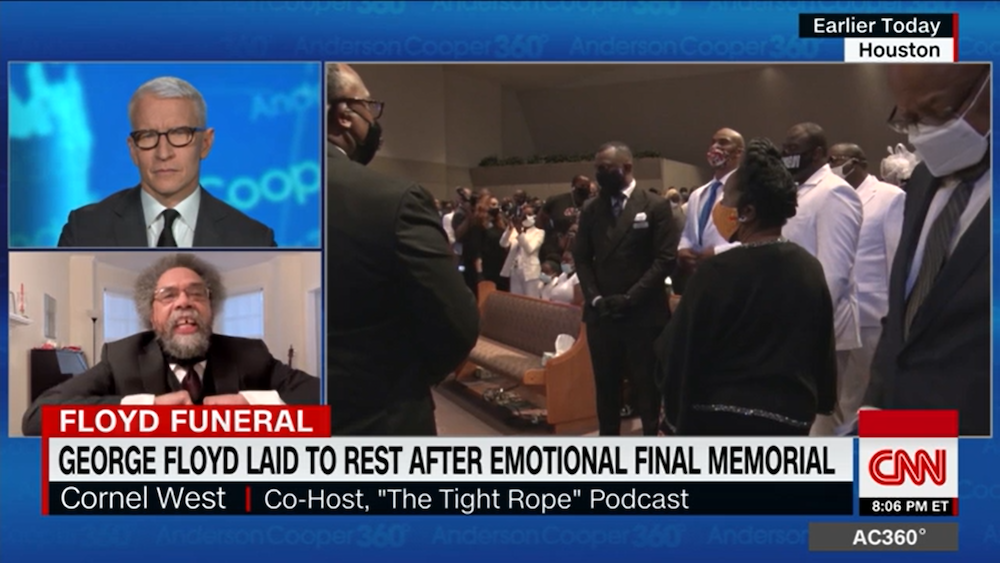 If you haven't you caught CNN's June 9 interview of Cornel West reflecting on the nationally televised Floyd family funeral, you should watch it. His words about the transformative power of the black faith community brought Anderson Cooper to tears:

It was all about love and justice. It's in the great tradition of the best of black people, of people who have been hated chronically, systemically for 400 years, but have taught the world so much about love and how to love. … After 400 years of being terrorized, we refuse to create a black version of the Ku Klux Klan…

… in the streets of our nation, we see this multi-racial, multi-cultural, multi-gender, different sexual orientation, different religions. Jewish brothers and sisters holding up Rabbi Abraham, Dr. Heschel, the Catholics holding up Dorothy Day, the Protestants holding up William Sloane Coffin …

We don't need lukewarm folk. We don't need summer soldiers. We need all-seasons love warriors. That's the tradition that we saw represented in that [Houston] church at the spiritual level.

Because of the power of God within them, African Americans are even now creating a new nation that celebrates diversity. A new people that lives our founding value that all are created equal.

In the words of Fannie Lou Hamer's African American spiritual, that community had to "stand the test" before they could cross the river Jordan.

Now it is time to cross to the other side.

And what of the white community? Will we "stand the test" of dismantling centuries-old racist structures? Will we embrace restorative justice to heal not only our black and brown citizens, but ourselves?

We must choose. Will we love God — or the world's treasure?