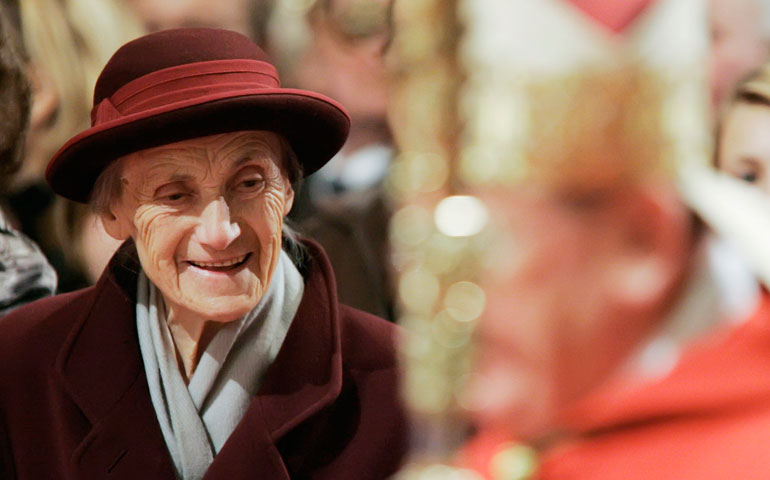 A native of Upper Austria, Franziska Jägerstätter gained a certain international renown nearly six years ago when her husband, who was beheaded in 1943 for refusing to join the Nazi cause on religious grounds, was beatified in an elaborate ceremony in St. Mary's Cathedral in Linz, Austria.

During the October 2007 ceremony, Franziska, then 94, was introduced to a sustained standing ovation. At one point in the ceremony, she walked to the sanctuary where she kissed an urn containing a bone fragment of her husband before turning it over for preservation in the cathedral.

Her funeral was held March 23 in her home village of St. Radegund. Cardinal Christoph Schönborn and several other bishops officiated at an outdoor Mass.

Author Erna Putz, a longtime friend of the family, explained at the time of the beatification that while the honor was an acknowledgment of Franz Jägerstätter's courage and conviction, it was also a vindication of Franziska, who had been the target of resentment among those in the farming village of St. Radegund, where the Jägerstätters lived. Some blamed her for influencing her husband's outlook and thus, ultimately, the path he took to his death.

It is clear from a biography, In Solitary Witness: The Life and Death of Franz Jägerstätter, written by the late Catholic peace activist Gordon Zahn, that the devout resister was a somewhat wild young man who had a reputation as a womanizer. According to the later Putz biography, Franz Jägerstätter Martyr: A Shining Example in Dark Times, he questioned his faith and stopped attending church during the period of 1927-30 while working in the iron ore industry in Eisenerz. Putz said he eventually returned to his home village "a stronger believer than ever." The faith apparently continued to grow and deepen throughout the rest of his life. At one point, he considered religious life but was discouraged from it by a parish priest. He married Franziska in 1936. The abundant correspondence between the two during the slightly more than three months Jägerstätter spent in prison before his death show that she actually had tried to change his mind at the start of his imprisonment, but came to an understanding of his deep convictions during his prison stay.

Jesuit Fr. John Dear, a peace activist who said that Jägerstätter's life was one of the influences that convinced him to go into the seminary, once wrote of a chance meeting with Franziska in St. Radegund. He had gone there to look for the homestead and came upon an elderly woman eating plums from a tree outside a residence. When he asked if she knew where the Jägerstätters lived, she responded, "I am Frau Jägerstätter."

"She looks like Georgia O'Keefe," Dear wrote, "has the sparkling eyes of Mother Teresa, a warm, gentle soul with an infectious joy and loving kindness. She carries herself with humility, a hint of shyness. But beneath lies strength, a solid faith, deep peace, towering Gospel conviction. She stands, to my mind, as much a saint as her martyred husband. After Franz died, she took up his job as sacristan and set about to raise their three girls and keep his memory alive.

"She offered words of welcome and showed me around," Dear continued. "Our first stop, the old family home, where Franz lived and worked, now a national museum. I ambled through the rooms and gazed upon the displays. I examined Franz's letters and his belongings, while Franziska and one of her daughters offered commentary, bringing Franz alive. During the evening, Franziska opened her photo albums and we gathered around, and the family conjured precious memories, warm and worn, story upon story."

It is unusual for Catholics on the path to sainthood to have been married, and a rather endearing moment occurred during the beatification, the second step to sainthood between being declared "venerable" and being canonized. Some 5,000 people crowded into the cathedral broke into sustained applause when Jägerstätter's four daughters, all of whom attended the ceremony, were acknowledged. He had three with Franziska -- Maria, Rosalia and Aloisa. A fourth, Hildegard, was born out of wedlock to another woman before his marriage to Franziska.

The evening of the beatification, a public official in that region of Austria hosted a large reception and buffet for those attending the ceremony. Franziska could be seen at a table, raising a glass of wine and greeting a steady stream of visitors.

[Tom Roberts is NCR editor at large. He attended the beatification ceremony for Franz Jägerstätter.]

A version of this story appeared in the April 12-25, 2013 print issue under the headline: Widow of beatified Austrian dies at 100.