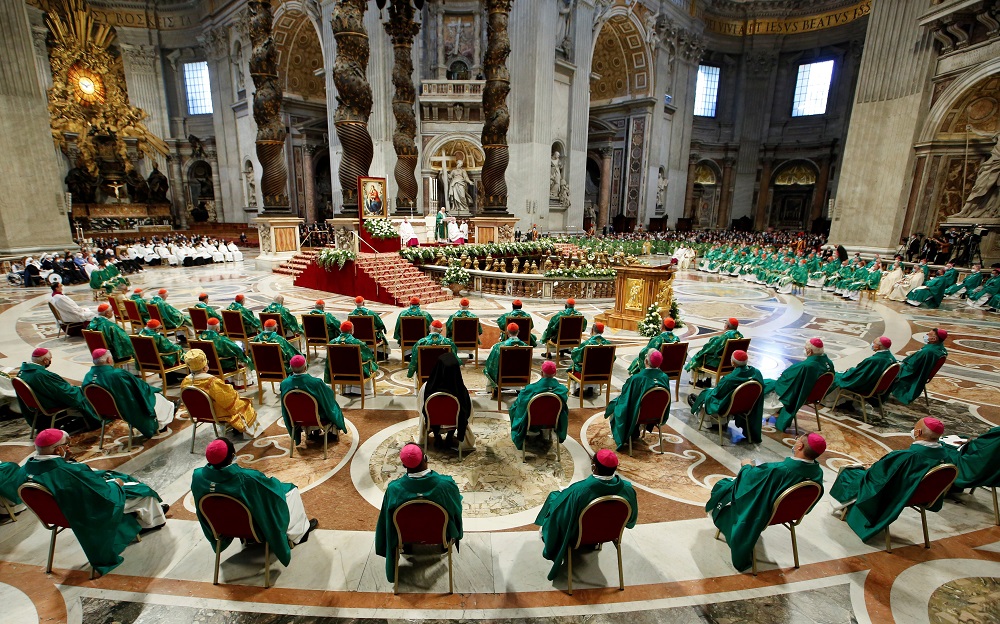 Bishops and cardinals are pictured as Pope Francis celebrates a Mass to open the process that will lead up to the assembly of the world Synod of Bishops in 2023, in St. Peter's Basilica at the Vatican in this Oct. 10, 2021, file photo. (Remo Casilli, Reuters/CNS)

More than a year ago, Pope Francis announced the Synod on Synodality, an initiative to take the pulse of the Catholic Church. U.S. Catholics have been mostly silent about this effort, but in several countries, including Australia, France, England and Wales, and Germany, things are moving full steam ahead.

Two major problems have come up time and time again: clericalism and the place of women in the Church.

If you haven't heard much about this effort, which completes its first phase this summer, you are not alone. In May 2021, six months prior to the synod's October 2021 opening, the Vatican asked the world's bishops to name synod coordinators in their dioceses, who were expected to organize a program of public meetings for Catholics, ex-Catholics and non-Catholics alike to talk about the church.

Some did. Some did not. Yet, somehow most U.S. dioceses, 95%, according to the U.S. Conference of Catholic Bishops, wrote reports, though relatively few are published. Participating dioceses melded parish reports into diocesan reports, which were combined into regional reports. From the regional reports, as well as reports from some 110 independent Catholic organizations, the USCCB will create a 10-page report, due in Rome.

Some diocesan reports, such as those from Buffalo, Louisville, Salt Lake City and Trenton, point to clericalism and the lack of women in leadership as problematic. Louisville, Trenton and Salt Lake City noted calls for women deacons. The Buffalo report found the abuse scandal (and) the lack of respect for women as manifested in an all-male clergy caused declining church attendance and membership.

The synod is a worldwide event, and early reports from bishops' conferences outside the U.S. repeat the same story: Clericalism is a scourge on the church, and women are not respected or included in leadership.

Australia recently survived a rocky Plenary Council meeting, during which the country's bishops voted down a statement witnessing the equal dignity of women and men, apparently because it included a request to restore women to the ordained diaconate. After nearly a quarter of council members protested, refusing to take their seats following a tea break, emergency meetings softened the statement to say the bishops would accept Rome's decision on women deacons.

France reported deep dissatisfaction with the place of women in the church and the need to recognize their suffering and expectations.

England and Wales recognized that women were a silenced, unrecognized majority, excluded from leadership and ministry.

Germany went so far on these and other topics that it earned a published reminder from the Vatican: While they might discern, Rome would decide.

Once all the national reports get to Rome, the plan is to create a general document for another round of discussion next year, in preparation for the October 2023 synod meeting of some 300 representatives in Rome.

Historically, synods are synods of bishops, but so far at least one woman, Xaverian Sister Nathalie Becquart, one of two undersecretaries (second in command) in the Rome synod office, will have a vote. The list of synod members, observers and experts should appear by the end of the year.

Whether anything will come of all this effort is anyone's guess, but strong words in several languages are calling out supercilious clerics who, convinced they control access to heaven, are ruining the church and chasing away members, especially women and girls. Overall, the people agree with Francis. These clerics do not. Whether clericalism can block calls for reform coming from the synod is uncertain.

How can this be?

For starters, the so-called biological solution touted by conservative Catholics is taking hold. As priest and bishop supporters of the Second Vatican Council and of Francis age out or die in place, they are replaced by a cadre of bishops ordained as priests during the reign of Pope John Paul II, who in turn appoint conservative pastors ordained during the reign of Pope Benedict XVI. Francis, as strong and alert as he is today, is not getting any younger.

Positive takes on the situation say the voice of the Holy Spirit is heard through the people, and God will steady the barque of Peter. But meanwhile, the Catholic Church as a force for good continues to lose influence inside and outside its walls, in large part because of how too many of its clerics treat women.