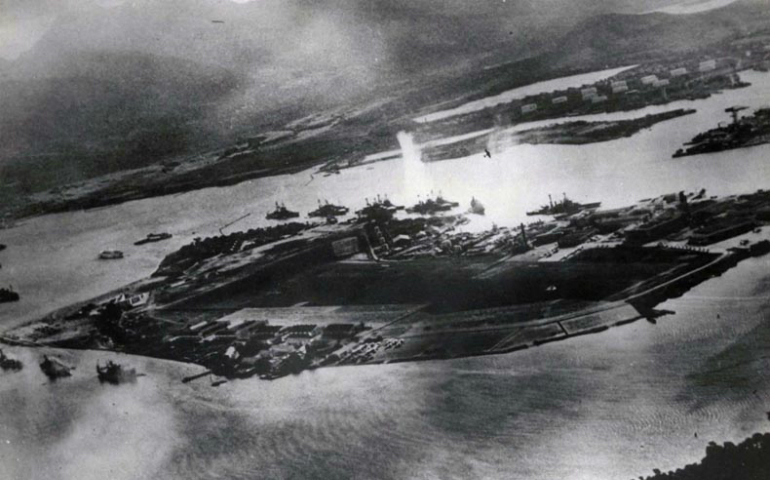 "Our beloved country is at war. Our peaceful shores have been ruthlessly attacked, and all citizens are called upon to unite their efforts toward that peace for which we have all prayed, that peace which the world cannot give, and that peace which God will surely bring about when mankind has seen its folly and conforms its ways to his."

Those are the opening words of the front-page editorial of The Catholic Herald, the publication of the Diocese of Honolulu, published Dec. 11, 1941, four days after the Japanese bombed Pearl Harbor.

This year marks the 75th anniversary of the attack.

The smallest of editions, a single tabloid sheet printed front and back, the newspaper was a somber reassurance of the faith, resolve and patriotism of Hawaii's Catholics.

"Our duty is clearly marked out," the editorial continued, "and will be faithfully executed. The pages of history proclaim the love and loyalty of Catholics for their fatherland in time of war as well as in time of peace. Catholics have been in the front lines at every battle in the history of our nation. And every war-time president from Washington down to our own beloved President (Franklin) Roosevelt has sung their praises.

"Difficult times may be ahead. But we are ready to face them. There may be many things which others would call sacrifices. But our leader has reminded us that for us they are not sacrifices, but rather privileges. We shall consider them as such, and take them in our stride."

At the time of the attack, the diocese was only 3 months old. The newly installed Bishop James J. Sweeney was in California at the time, stranded with all commercial travel on hold, following his attendance of the annual U.S. bishops' meeting in Washington. He was able to find a berth on the first troop transport ship to the islands and immediately took a role as chaplain, counselor and confessor for men headed for the battlefield.

It may have been providence that Sweeney was away because the one news story in that post-attack edition reported that his home on the slopes of Punchbowl Crater in Honolulu, about eight miles from Pearl Harbor, had been "bombed."

"The home of His Excellency Bishop Sweeney on Thurston Street was considerably damaged when bombs struck the Spencer Street entrance and destroyed the stairway leading to the second floor," the story said. "The house was unoccupied at the time."

Later, it was speculated that the "bombs" were probably American anti-aircraft fire.

The story further reported that "several narrow escapes were reported by various pastors, but no serious losses."

It also said that "St. Stephen's Seminary in upper Kalihi Valley suffered some damage as a result of a bomb which fell quite close to the building, shattering windows and breaking a water pipe. No one was injured, and the students have returned to their families until the government order affecting schools is lifted. The seminary building will probably be taken over by army authorities temporarily."

Oddly — or perhaps not, considering the large number of Hawaii residents of Japanese ancestry — the Catholic Herald never named the attacking country.

The unsigned front-page editorial, framed by a drawing of a man and woman gazing upward at a flying American flag, pledged prayers and the resolute cooperation of the church for the still unknown sacrifices ahead.

"Already our Catholic institutions are bee hives of activity. Our hospital is equipped. Our schools and halls are at the disposition of those who need them. Our Sisters are ready, as ever, to lend the helping hand, to suffering wherever it may be. Our priests are striving to assist their confreres the noble chaplains of our armed forces. Everyone is anxious to render as much assistance as is humanly possible.

"Thank God for our good Catholic people also who realize that we must not only work for peace, but must continue, nay redouble our prayers and self-denials. The kingdom of Heaven is said in holy Scripture to suffer violence, and we are reminded that it is the violent who bear it away. So we shall storm the heavens with our prayers while we do everything possible in the realm of material things to bring about what we all desire: Peace on earth to men of good will.

"God grant that the trying times through which we are passing may be shortened. May the Lord hear our prayers and hasten to our aid. And meanwhile, let us carry on courageously, united for God and country."