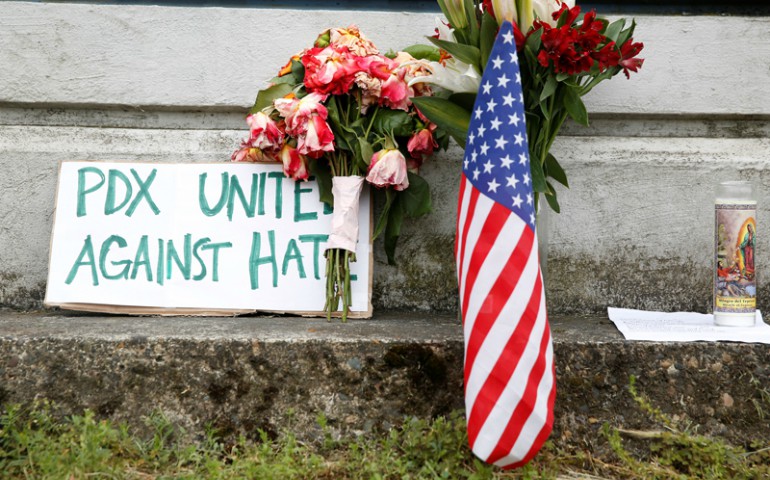 A sign rests against a wall at a makeshift memorial for two men who were killed on a commuter train while trying to stop another man from harassing two young women who appeared to be Muslim, in Portland, Oregon, May 29, 2017. (REUTERS/Terray Sylvester)

A man facing murder charges after he allegedly fatally stabbed two people and injured another on a Portland light-rail train has a history of run-ins with law enforcement and is a self-proclaimed white supremacist, authorities said.

Jeremy Joseph Christian, 35, is charged with aggravated murder, attempted murder, intimidation in the second degree and felony possession of a restricted weapon stemming from the May 26 attack. Christian makes his first court appearance Monday.

Portland homicide detectives are investigating what led to the attack, including taking an extensive look at Christian's background and extremist ideology, police said.

"Detectives have received many tips about the suspect's prior behavior and interactions with members of the community and will continue to investigate this information," said Portland police spokesman Sgt. Pete Simpson.

Witnesses said Christian stabbed three people who tried to calm him down after he was directing hate speech at two women on the train who are believed to be Muslim. One woman was wearing a hijab.

The attack happened Friday, the first day of Ramadan, the holiest time of the year for Muslims.

President Trump condemned the stabbings, writing Monday on Twitter: "The violent attacks in Portland on Friday are unacceptable. The victims were standing up to hate and intolerance. Our prayers are w/ them."

Portland Mayor Ted Wheeler said he appreciated Trump's words but stressed the need for action. Wheeler urged organizers to cancel a "Trump Free Speech Rally" in Portland and other similar events next weekend, saying they are inappropriate and could be dangerous.

Christian recently gained local notoriety at a "Free Speech" march in Portland in April. He was draped with the American flag and reportedly chanting the N-word throughout the march.

Conservatives, liberals and anarchists rejected Christian at the march.

On his Facebook page, Christian shared a post with a video and photo of him performing a Nazi salute during the march. In a comment on his page Christian proclaimed, "I am White and a Nationalist for Vinland."

In a post three days after the inauguration of Donald Trump, Christian posted, "If Donald Trump is the Next Hitler then I am joining his SS to put an end to Monotheist Question."

In addition to Christian’s Facebook posts, he has had multiple run-ins with law enforcement.

In 2002, he pleaded guilty to robbery and kidnapping for reportedly handcuffing the owner of a market to a counter and stealing cash and cigarettes. The Oregonian reported he was shot in the face as police tried to take him into custody.

In another incident in 2002, Christian was charged with use of a dangerous weapon and supplying contraband.

In 2010, he was charged with theft and felon in possession of a firearm.

On Saturday, Portland police said a review of Christian’s record "shows he is not flagged as a criminal gang member, nor does he have any known mental health history listed."

Wheeler and City Commissioner Chloe Eudaly denounced Christian's actions and applauded the victims' bravery for standing up to Christian.

"Two men lost their lives and another was injured for doing the right thing, standing up for people they didn't know against hatred. Their actions were brave and selfless, and should serve as an example and inspiration to us all. They are heroes," Wheeler said.

"We need to offer our heartfelt support to the women and others who were targeted. The courage of the people who stood up for them is a reminder that we as a city need to stand together to denounce the hate," Eudaly said.