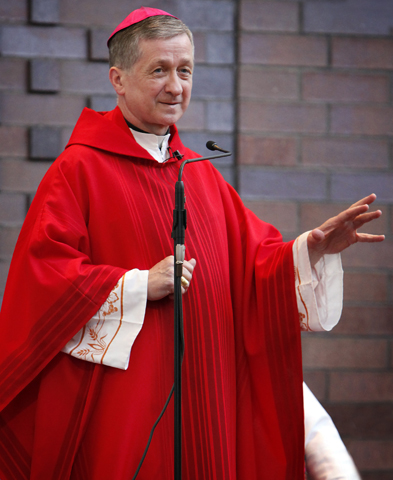 In yet one more sign of his growing confidence in the archbishop of Chicago, Pope Francis appointed Blase Cupich to the Vatican Congregation for Bishops, the office that proposes candidates for the episcopacy.

The turnover of American personnel on the congregation during the past few years is significant for several reasons. First, the congregation is, aside from the pope, perhaps the most important link in the chain of creating bishops. Soon after his election, Francis removed two Americans -- Cardinal Justin Rigali and Cardinal Raymond Burke -- from the congregation. Both men were major players in constituting the American episcopacy during the papacy of Benedict XVI. Rigali also previously served as secretary of the congregation.

Many of the bishops appointed during that era formed the core of "culture warrior" bishops who kept such issues as opposing same-sex marriage, the contraception mandate of the Affordable Care Act, as well as religious liberty foremost on the agenda of the U.S. Conference of Catholic Bishops. The tone of the conference in recent years has become heavily legalistic both in terms of pastoral approach within the church and in battling in court over civil matters.

Francis has made it clear in his several public speeches to bishops conferences, including his talk to U.S. bishops during his visit to the United States, that he wants a different type of religious leaders. In a September 2015 address at the Washington Cathedral of St. Matthew, he urged bishops to promote "a culture of encounter," to avoid harsh language and to "dialogue fearlessly" with all.

The first clear indication of the type of bishop he wanted in place in the United States came with his personal appointment of Cupich to Chicago, where he succeeded Cardinal Francis George. Cupich brought the kind of pastoral credentials, including involvement with national lay initiatives and a reputation for wide consultation and dialogue from his terms as bishop of Rapid City, S.D., from 1998 to 2010, and of Spokane, Wash., from 2010 to 2014, when he was appointed to Chicago.

Since his installation as archbishop of Chicago in November 2014, he has weighed in on a number of social justice issues, including impassioned pleas for gun control in a city that is experiencing record numbers of shootings. Following the killing of 49 people in a gay dance club in Orlando, Fla., he also sent a note of solidarity to the Catholic LGBT community in Chicago as it gathered for mass.

Cupich's position as a top Francis ally in the United States seemed affirmed last summer when the pope personally appointed him as a participant in the Synod of Bishops on the family.