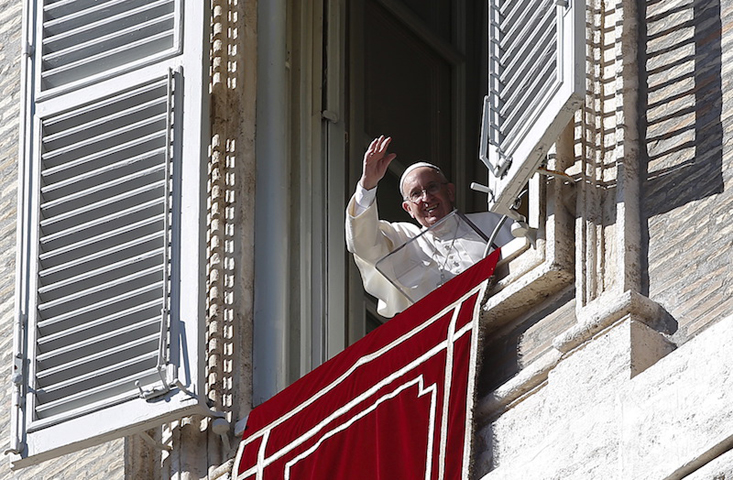 Pope Francis waves during his Sunday Angelus prayer in Saint Peter’s Square at the Vatican on Nov. 8, 2015. (REUTERS/Alessandro Bianchi)

Pope Francis on Sunday, Nov. 8, broke his silence over the leaking of confidential Vatican documents, which he described as a “deplorable act” that will not stand in the way of his ambitious reform agenda.

Speaking to followers in St. Peter’s Square, the pontiff criticized revelations made in two books published last week that explore Francis’ efforts to overhaul financial mismanagement within the Vatican walls.

“Stealing those documents was a crime. It’s a deplorable act that does not help,” the pope said, adding that the leaked information was based on a study he had personally requested.

“I wish to reassure you that this sad event certainly does not deter me from the reform project that we are carrying out, together with my advisers and with the support of all of you,” said Francis, telling his followers they should not be upset by recent events.

His comments follow the arrest last weekend (Oct. 31-Nov. 1) of a Spanish priest, the Rev. Lucio Angel Vallejo Balda, and an Italian public relations executive, Francesca Chaouqui, accused of being involved in leaking confidential information. The duo had been appointed by the pope to a temporary commission set up in 2013 to reform the Vatican bureaucracy.

The challenges faced by the commission in seeking to gather information on spending at the Holy See administration, known as the Curia, were outlined in two books based on secret audio recordings and documents handed over to the authors.

Both Gianluigi Nuzzi’s Merchants in the Temple and Emiliano Fittipaldi’s Avarice, describe a prevailing culture of waste and secrecy within the Curia that has hampered Francis’ reform efforts. While both books outline mismanagement at the heart of the Vatican, the pontiff is afforded an air of sympathy for his attempts to bring financial discipline to the Holy See.

But during his homily at Friday Mass the pope appeared to take aim at those within the Catholic Church whose greed has been highlighted by the two authors.

“In the church, too, there are these kinds of people, who instead of serving, of thinking of others, of laying the foundations, are served by the church: ‘climbers,’ those who are attached to money,” the pontiff said.

There has been speculation that the two books could damage Francis as a previous leak hurt his predecessor Pope Benedict XVI. In 2012, Benedict’s aide, Paolo Gabriele, was jailed over the theft of documents but later pardoned. The scandal is thought to have contributed to Benedict’s decision to resign in February 2013.

Others argue Francis may emerge as the victor in the reform battle.

Paul Vallely, author of Pope Francis: Untying the Knots, said the scandal “portrays Francis in a good light,” even amid embarrassing chapters.

“That is proof of his determination to bring change, not evidence of the opposite,” Vallely wrote in The Guardian.

Shawn Tully, an editor at large at Fortune, said Nuzzi’s text in particular “shows the the pope does far more than establish a general tone of frugality.

“He knows precisely what disciplined and sophisticated financial management is all about … he’s impossible to fool,” Tully wrote in Fortune.