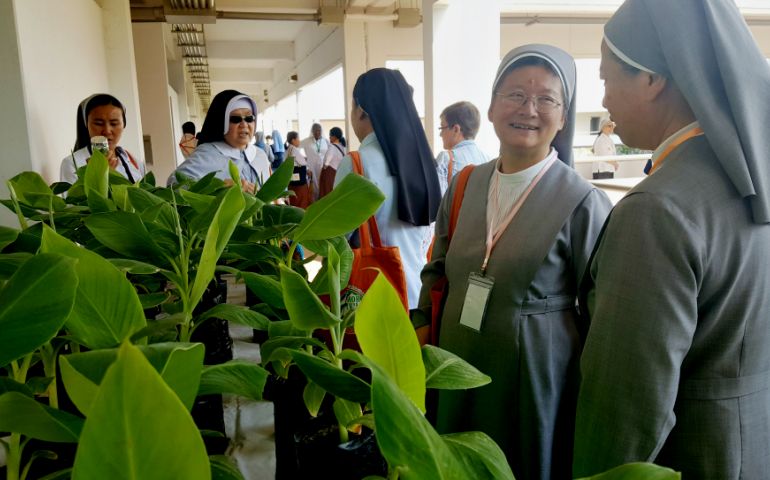 Yangon, Myanmar — As the Asia-Oceania Meeting of Religious XVII wrapped up March 3 in Yangon, Myanmar, participants said they would carry with them a renewed commitment to their responsibility as eco-citizens, the message of environmental care to their congregations and beyond, and an affirmation of the meeting's importance in strengthening the work of religious in the region.

The conference's theme, "A Call for Global Ecological Conversion," used Pope Francis' encyclical "Laudato Si', on Care for Our Common Home" and his papal bull, Misericordia Vultus, which introduced the Holy Year of Mercy, as spiritual frameworks in exploring issues related to the environment and climate change.

Participants said the message of caring for the Earth, countering climate change and helping communities that global warming affects most will continue beyond the five-day Asia-Oceania Meeting of Religious, known by its acronym, AMOR.

"By doing this, we have done something for the whole Catholic church and the church in Myanmar," Sr. Margaret Maung, president of the Catholic Religious Conference of Myanmar, a Sister of Our Lady of the Missions and chairwoman of the 19-member working committee, said in an interview. "By the presentations and the table sharing and interacting, we came to know each other and the reality of the church, and that we are one with the Earth and the strengths and weaknesses of the environment and climate change."

A keynote address by Yangon Cardinal Charles Bo on the first day, Feb. 27, set the tone for the gathering of 132 participants from 21 countries. Country reports from Bangladesh, India, Korea, New Zealand and others showed the effects of climate change and pollution, as well as specific concerns, such as use of nuclear power in Japan in the wake of the 2011 Fukushima nuclear disaster.

In subsequent days, participants explored more deeply the meaning of eco-spirituality and the inherent Asian spirituality that celebrates "contemplative consciousness" and "ecological consciousness understood as awareness and sensitivity to the interconnectedness of all beings and things on Earth," as Claretian Fr. Samuel Canilang, director of the Institute for Consecrated Life in Asia, said in his presentation.

"Asians don't need anyone to tell us the environment is sacred," he said. "It is natural to us."