Skip to main content
News
A version of this story appeared in the Jan 30-Feb 12, 2015 print issue under the headline: Chicago's black Catholic deacons 'lift each other up'. 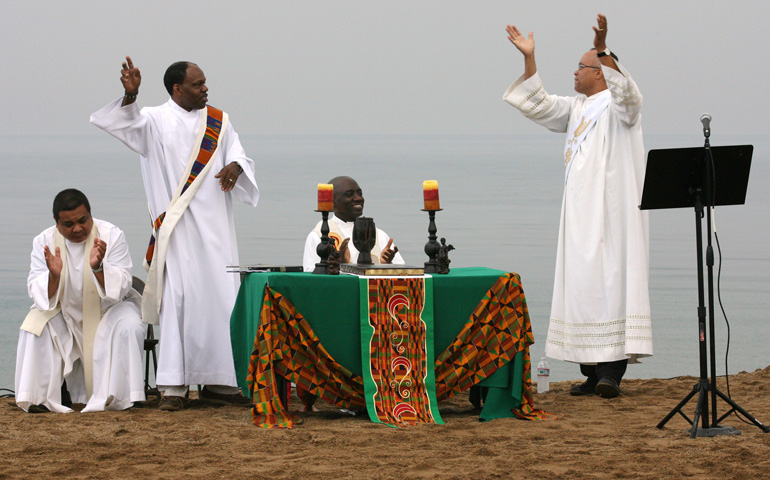 Deacon Leroy Gill and Deacon John Cook lead participants in song during a prayer service in Chicago Aug. 21, 2010. Simultaneous back to school sunrise prayer services to pray for an end to violence, the protection of children, and a successful and nonviolent school year were conducted at five Chicago becahes along the shores of Lake Michigan. (CNS/Karen Callaway)

In predominantly African-American parishes across the Chicago archdiocese, deacons took to the pulpit to preach against violence in their communities on the fourth Sunday of Advent. At the end of Mass, they removed their albs to reveal T-shirts with the message "All Lives Matter" and, before leading the congregants to the streets to protest and pray, read a letter to new Archbishop Blase Cupich.

"We stand united as a result of Ferguson, Staten Island and Cleveland, recognizing that violence, distrust and prejudice are not restricted to any one city or community," said the letter, signed by Deacon LeRoy Gill Jr., chair of the Black Catholic Deacons of Chicago.

The organization, with approximately 30 members, was founded in 1968 to make sure the voices and concerns of black Catholics were heard. Today, it not only supports African-American men on the path to the diaconate but has made addressing violence -- especially against young blacks -- a priority.