Cornered into trusting God while abroad 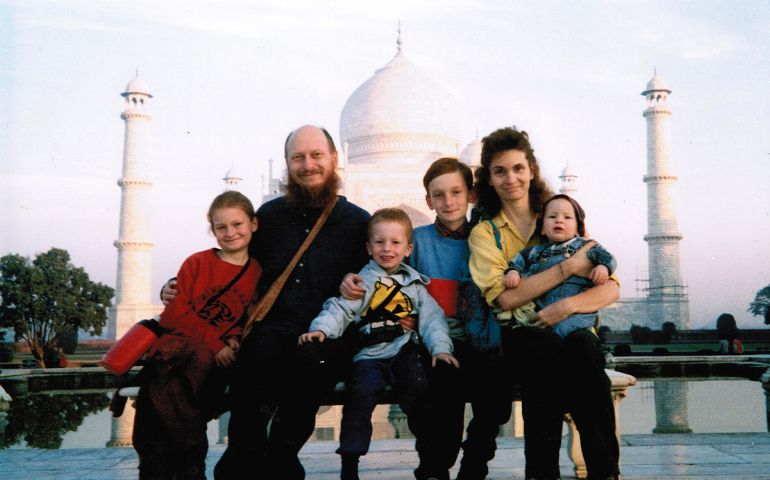 The Schaeffer-Duffys at the Taj, after Aiden’s recovery

It was my idea to journey through India with our four small children. Justin, our oldest, was 10 years old and Aiden, the baby, 9 months and still nursing.

Our three-month excursion was to be part research, part pleasure — stays at Gandhian ashrams interspersed with stops at traditional tourist sites. We would start in New Delhi, the capital, head north for the Himalayan foothills, travel west to the state of Gujarat, then circle through the cities of Jaipur and Agra before journeying south to the state of Kerala.

The itinerary was too ambitious for young children. But I had inherited my peripatetic father’s habit of traveling as if death was breathing down your back. “See all you can while you can,” he’d say. “You may not pass this way again.”

Like my father, I wanted our children to know something of the world beyond their native Worcester, Mass. I was 2 years old when he had hauled his family to New Delhi, where we spent seven marvelous years.

I yearned to go back, to give our children an experience of what I had experienced — to hear the Muslim call to prayer swirling above the din of a Delhi street and the afternoon cry of the ragman as he clattered through the back alleyway; to stand transfixed before the neighborhood snake charmer; to smell incense from a street shrine penetrating the stench of the marketplace; to see the dusty-haired children clustered inside hovels that clung like barnacles to opulent compounds; to see the rickshaw wallahs sleeping fitfully on their carts by the side of the road; to lie at night in rooms with open windows (a year-round possibility in tropical countries) and fall asleep to the high-pitched singing of a Bollywood song played low on the radio and the white tiger growling restlessly in the zoo across the street; and then to wake to the frenzied clanging of bicycle bells as thousands of commuters wheel through the capital.

I wanted them to taste, however briefly, India’s contradictions, her madness, her holiness, and be infected with a restlessness that keeps you hungry for a vivid life. For God. My Indian childhood, after all, influenced my own conversion to Catholicism.

'Sometimes a fire is just a fire'

A hunt for the memory of my Italian and Mexican grandparents

Parents of missing Mexican students travel to U.S. to appeal to pope

How Catholics got conned by Donald Trump