Living like prisoners: Women talk about US detention centers 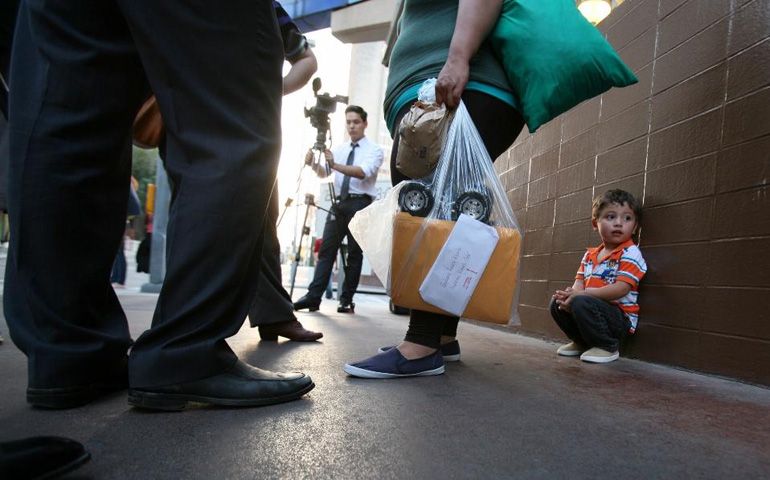 Two-year-old Alejandro Galeano finds a spot away from his mother's hand after being released from the Karnes County Residential Center in Karnes City, Texas, on April 9. His mother, Kenia Galeano, center, talks to the news media after her release. (Nuri Vallbona)

The wake-up calls were abrupt and loud -- guards pounding on doors at 5 a.m. -- and then came shouts and the crying.

"The children wake up crying, screaming -- the children because they knock too hard on the door," said Edith Osorto, an immigrant from Honduras, describing a typical morning at the Karnes County Residential Center. And if the women didn't get up, "they would enter and yell at us to get up. They would yell, 'Ladies, get up! Delinquent ladies!' "

More than 180 women and children seeking asylum are held at Karnes, one of two family detention centers in south Texas operated by companies under contracts with Immigration and Customs Enforcement, known as ICE. Their plight is drawing increasing attention, fueled on the inside by a hunger strike and fast and on the outside by legal jockeying and a recent visit by the head of ICE.

At the heart of the matter are complaints of lengthy stays in prison-like conditions, as well as a question repeatedly posed by activists, attorneys and faith-based organizations: Why are women and children being detained in centers run by for-profit corporations that specialize in the corrections industry?

Family detention had all but ended in 2009 but was reinstated by the Obama administration after the influx of women and children fleeing Central America last summer.

"They're putting these kids in these lockdown facilities, unlicensed facilities -- they are run by correctional staff," said Ranjana Natarajan, a clinical professor and director of the Civil Rights Clinic at the School of Law at the University of Texas. "They are not licensed by the state of Texas to work in child care. In other words, none of the staff are trained to work in child care."

Five Central American women who had been held at Karnes, including one who is still there, recently spoke with Global Sisters Report. All had stories to tell of violence or the threat of the violence that led them to flee their homes and of being confined in a place where they didn't understand the rules or why they and their children were being treated so harshly.

Politics | Living like prisoners: Women talk about US detention centers