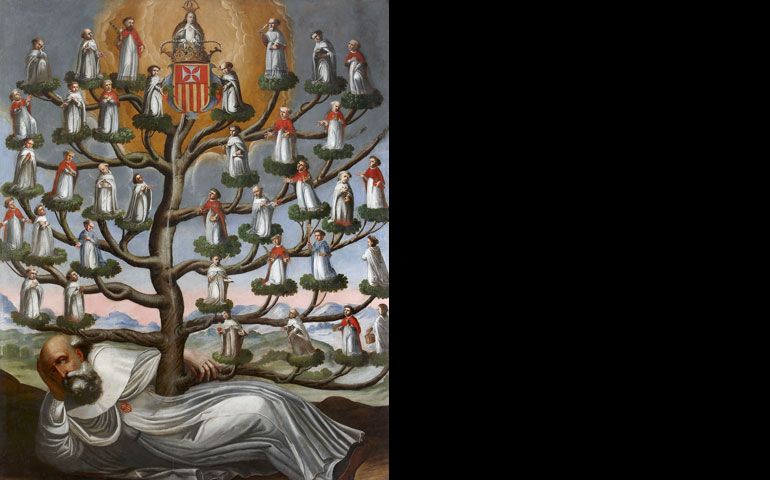 The bearded and robed reclining figure of St. Peter Nolasco cannot be sleeping soundly or dreaming sweetly. A tree has sprouted from his left side, and no fewer than 36 friars stand on leaf platforms formed by 11 branches emanating from the trunk. Above the tree, the Virgin of Mercy perches atop the coat of arms of the Mercedarian Order, which the 13th-century saint founded to negotiate with Muslims and pirates in North Africa, Spain and the Mediterranean for the release of Christian captives.

Modeled on prior artistic devices, such as the Tree of Jesse and the Tree of Life, which also mapped out families or dynasties on trees, this mid-18th century “Genealogical Tree of the Mercedarian Order” by an unknown painter depicts some of the friars -- no doubt a who’s who of Mercedarian VIPs -- with attributes that would have made them recognizable at the time. The entire framework of this tree and its predecessors evokes the mysterious Deuteronomy passage (20:19) declaring that “man is a tree of the field.”

The Mercedarian tree in particular is so theologically fertile and visually arresting that Rebecca Long, associate curator of medieval to modern European painting and sculpture at the Art Institute of Chicago, built an exhibit around it. This and 12 other paintings make up the exhibition “Doctrine and Devotion: Art of the Religious Orders in the Spanish Andes” (through June 25, 2017), which charts the ways Dominicans, Franciscans, Mercedarians, and Jesuits developed unique iconographies between the 17th and 19th centuries while trying to sway indigenous hearts and minds to Christ.

Another work in the exhibit, a “Holy Family with Mercedarian Symbols,” created by the workshop of Bernardo Rodriguez in the late 18th or early 19th century, shows a yoke and handcuffs, which refers to the redemption of captives, in which the Mercedarians would often offer themselves to replace kidnapped Christians.

Initially, it may be difficult for modern, educated viewers to take in the role that the works were supposed to play. It’s tough to imagine allowing some paint on canvas to change one’s mind, let alone to inspire one to put one’s most fundamental beliefs and religious convictions on trial.

But it’s generally the case with works from centuries past that it’s vital to suspend much of what one takes for granted today. These paintings, some of which missionaries in the New World displayed on their own walls and others that they used as props to teach nonbelievers about Christianity, were their era’s social media. There were no computers or internet, of course, but the printing press spread the reach of iconic images of saints and famous religious people. Paintings were singular, but printers helped those works cross continents and travel overseas.

“You do have the 17th- and 18th-century equivalent of viral videos, in particular these localized devotions -- Our Lady of So-and-so,” Long said. “As people move around, they take these things to heart.”