Overcoming church’s negative past in Spain 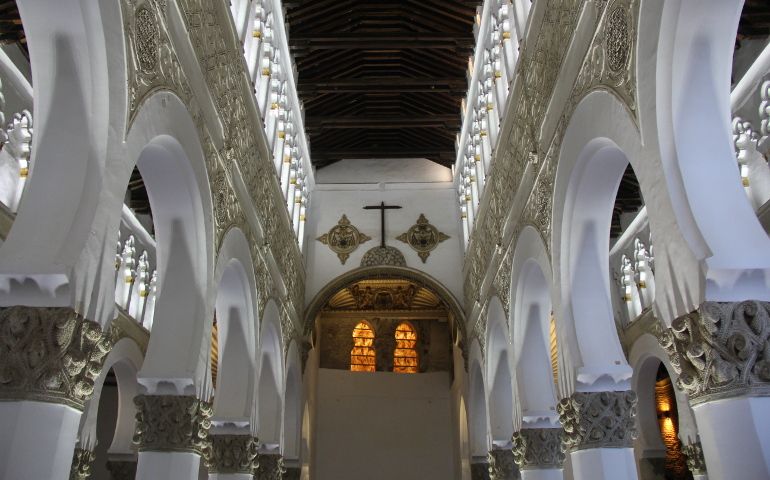 Toledo, Spain — “Alas the synagogues, fallen to ruins, where kites and vultures have nested; for the children of Israel have departed,” wrote Ya’aqob Albeneh in a 1391 poem. He was describing a pogrom, which he survived, that began in Seville and left thousands of Jews murdered after it spread to Barcelona, Córdoba, Seville, Toledo and Valencia.

“The major synagogue, fallen into misfortune: raises her wailing voice, synagogue of Israel,” the poem continues. “Her doors lie parched, she was penetrated by mobs, Muslims and Christians, who obliterated from there the children of Israel.” That synagogue, one of up to 10 in Toledo described in the poem, may refer to what is today called Santa María la Blanca. If that doesn’t sound like the name of a typical Jewish house of prayer, that’s because it’s a church.

An inscription on a brick wall as visitors enter into a courtyard notes, “Antigua Sinagoga del Siglo XII,” following some datings of the building to 1180. Others refer to 1203 as either the year the synagogue was built or remodeled, while others claim it was likelier built after 1250 and even as late as 1300. From the outside, the structure follows much of Moorish architecture: Its plain, stone exterior doesn’t betray the lavishness inside. After entering via enormous modern doors, visitors immediately confront a high, paneled ceiling, which rests on Moorish-styled arches held up by four rows of white octagonal columns. The layout is basilican.

Unlike at the nearby El Tránsito synagogue or the synagogue in Córdoba — the only two other former Jewish houses of prayer in Spain dating to the Middle Ages — these walls aren’t adorned with Hebrew inscriptions. Not only are Jewish symbols absent, but a cross appears above the central niche.

“All polychromatic decoration disappeared with a general whitewashing, which justifies the name given to its Christian title, Saint Mary the White,” notes scholar Jesús Peláez del Rosal, in his book sold at many Jewish Spanish tourist sites.

Peláez del Rosal quotes a common account, which he calls mythical. Dominican friar Vincent Ferrer, who was later canonized, arrived in the city in the early 15th century and saw Jewish “obstination, disbelief, and treachery.” He took armed men into the Jewish quarter and turned them out of their synagogue. Thus Santa María la Blanca was born in 1411, less than a century before Spain expelled all of the Jews in 1492. (The El Tránsito synagogue also was turned into a church.)

After centuries of persecution, 'lost' Brazilian Jews struggle to regain their place

Thousands in Berlin protest against anti-Semitism

Nearby Catholic church reaches out during hostage crisis at synagogue