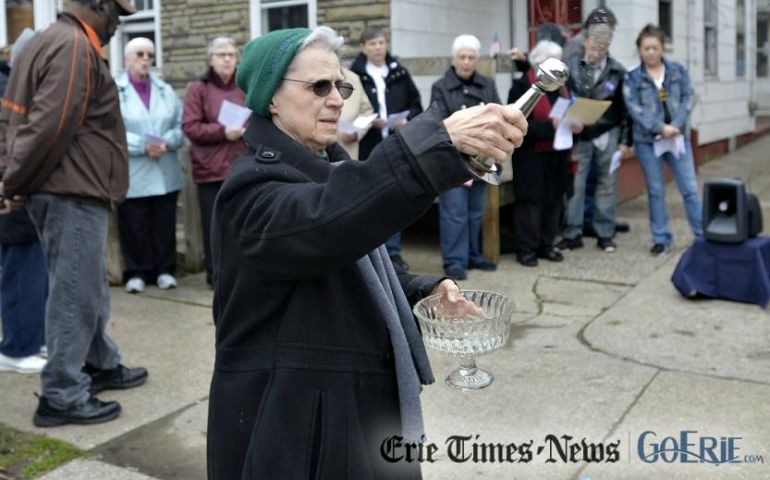 Mercy Sr. Mary Paul sprinkles holy water during a vigil for Robert McCarthy outside his Erie home March 28. McCarthy was stabbed to death and set on fire Feb. 5 outside his home on East Ninth Street in Erie. (Erie Times-News/Dave Munch/Reprinted with permission from Times Publishing Company, Erie, PA, Copyright 2017)

Erie, Pa. — The scene in early February — 125 or so people gathered somberly on a sidewalk praying and singing — might seem, in most places, a bit odd. But in Erie it was a familiar symbol of contradiction: a reminder that another person had been murdered in this gritty city on the country's northern edge and that the nuns were there to insist that violence would not ultimately prevail.

Darrin Germany Jr., 28, was shot to death Dec. 31 near the intersection of Prospect Avenue and June Street, the last of 13 homicides in Erie in 2016.

A few months later, the crowds gathered for a Take Back The Site vigil, organized by three women religious orders in the city, the Benedictine Sisters of Erie, the Sisters of St. Joseph and the Sisters of Mercy. The February 2 ritual marked the 100th iteration of the 15-minute ceremony first held in October, 1999.

Some deep instincts were at work back then when some members of the Erie Benedictines decided to head out to the parking lot of a Dairy Queen to reclaim a site where a homicide had occurred.