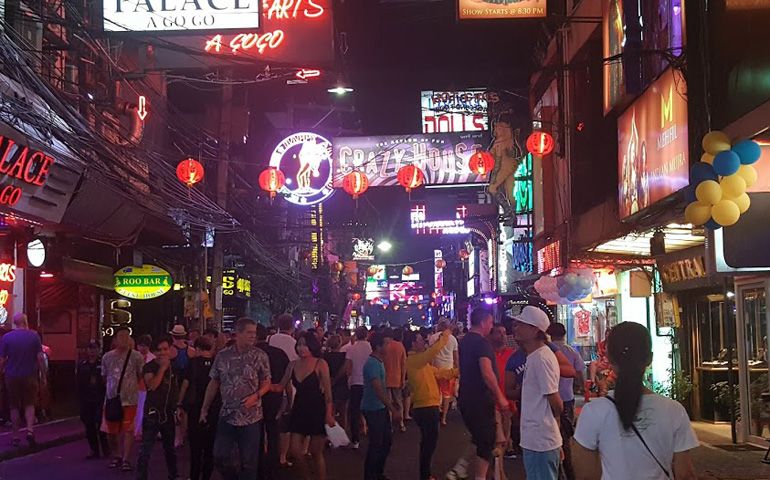 The streets of Pattaya, Thailand, one of the centers of sex tourism (GSR photo / Gail DeGeorge)

New York — Public debate on prostitution can be tough, passionate, even angry.

Advocates for differing views cannot even agree on shared language: Those who defend their way of making a living as sex workers embrace their identity, while those, like Catholic sisters, who decry the term "sex work" as demeaning, argue that there can be no dignity in a relationship where sex is exchanged for money.

"I think all prostitution represents violence against women," said Sr. Winifred Doherty, who represents the Congregation of Our Lady of Charity of the Good Shepherd at the United Nations.

The passion Doherty and others bring to the topic has been on display during the last year at the U.N., where space for debate about social topics is frequently honored. The topic of prostitution was addressed at several U.N. forums during the March meetings of the Commission on the Status of Women.

And inevitably, the U.N.'s upcoming World Day against Trafficking in Persons on July 30 may prompt debate. The commemoration was designated by U.N. member states beginning in 2013 as necessary to "raise awareness of the situation of victims of human trafficking and for the promotion and protection of their rights."

There is, of course, overlap between prostitution and trafficking — many prostitutes are, or have been, trafficked. But Monica Jones, a transgender woman and self-identified sex worker in Phoenix, Arizona, argued during the commission meetings it is a mistake to equate the two.

"They are two different things," she said, arguing that critics of prostitution too easily slide into muddying the issues. "Do not conflate trafficking with sex work."

Human trafficking in the US: Sisters' efforts break the cycle one life at a time