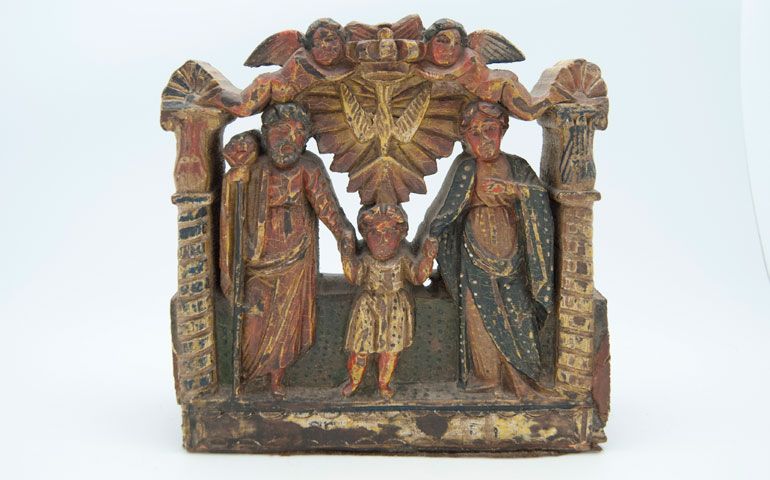 Mill Run, Pa. — One of several surprises at Fallingwater -- the iconic weekend-retreat home designed by Frank Lloyd Wright and built on a waterfall in 1936 -- are the collection's religious works. The patrons, the Kaufmanns, were Jewish, but their collection includes Buddhist and Hindu sculptures, and several noteworthy Catholic works.

In the master bedroom of the house, which is drawing record visitorship amid a bid of several Wright buildings for UNESCO World Heritage status, Wright constructed a niche specifically to house a circa-1420 polychrome carved wood Madonna and Child by an unknown artist. Edgar Kaufmann Sr., who owned Kaufmann's department store in Pittsburgh and who commissioned Fallingwater with his wife, Liliane, purchased the work. It was thought to be of Austrian-Bohemian origin and was displayed in Fallingwater in 1938.

In an alcove on the third floor where he slept and worked, Edgar Kaufmann jr. -- who preferred spelling "jr." lowercase -- installed devotional wood carvings of the Holy Family, or "santos." One such polychrome wood sculpture, of unknown origins, stands in for the pieces that used to appear in that hallway.

As visitors ascend the first set of indoor stairs, they arrive on the second floor face-to-face with an 18th-century Madonna and Child tempera painting by an unknown, perhaps Peruvian artist. The work depicts the Madonna, clad in a flowing dress with floral patterns and an elaborate hat, attended by two angels (one bearing the sun and the other the moon) as she cradles the infant Jesus on her lap.

The trompe l'oeil work, which sets the figure against a deep blue background, includes painted red curtains, as if the entire painting was displayed on a theatrical stage. It was part of a 1941 exhibition, "Below the Rio Grande," at Kaufmann's department store. And, said Fallingwater director Lynda Waggoner, it was almost thrown in the trash.

When Waggoner started working at Fallingwater, water infiltration from the ceiling and wall had damaged the painting badly. A black-and-white photograph of the work installed at the department store in 1941 helped conservators, who had to contend with a hole in the work "big enough that one could put one's hand through it," according to Waggoner. Conservators had to guess how the drapery fell in the background.

"We've since found out that we guessed wrong," Waggoner said. "So in the future, and I'm sure it will require restoration again, we will be able to document it correctly."

A woman of courage, fortitude and hope

NCR's top 10 most read opinion and commentary articles of 2020

'Killing Jesus' is remarkable but doesn't give the whole picture